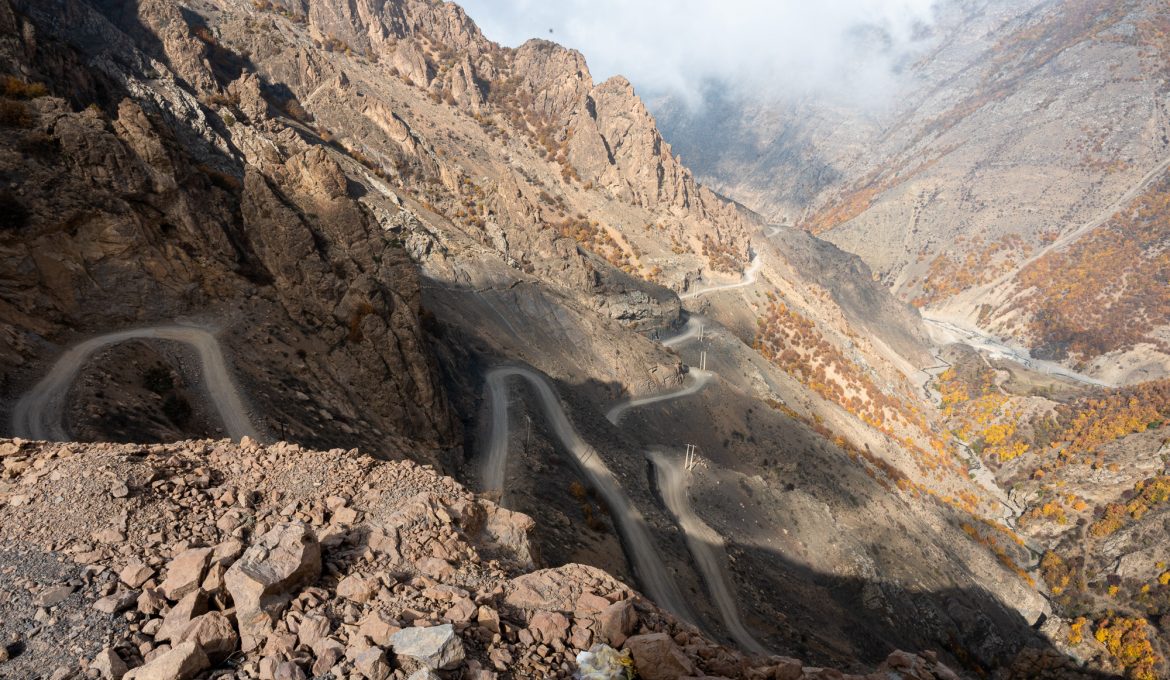 Nobody thought it is possible … and we ourselves were also unsure until the very end, but the entry into Iran with our medical visa works smoothly (tourist visas were still not issued due to the pandemic at the time of our entry). The Turkish border guards find all of this a bit suspicious and they first let the Iranian immigration confirm that we are really allowed to enter before they stamp us out, but that’s about it.

The main challenge is rather the physical border crossing: the border at Kapikoy/Razan is closed for commercial truck traffic and new border buildings are currently being built on the Iranian side. So, it’s all pretty messy and a big construction site. Even if we always like to see ourselves as a camper-caravan in these cases, we have the size of a big truck. Correspondingly narrow, both in width and in height, is the passage for Shujaa. Karin waves me through with millimeter precision under an iron roof, but the roof is slightly conical, so that we slightly scratch our branch deflectors. Of course, we didn’t think about deflating our tires to reduce height at the moment. We didn’t want our hard-earned border crossing to fail because of a construction site roof: but in the end Shujaa is also on Iranian soil.

Iran does not make it easy for us after the unproblematic entry, however. Actually, you nowadays need Iranian license plates for a stay of more than ten days: We also receive a corresponding letter from customs at the border and we transfer the requested fees correctly. But none of the three different police or registration stations that we visit want to give us the license plates. In the nearby city of Khoy they can supposedly only register cars but not trucks, they send us to Orumiyeh. But that’s not on our direct route, so we try the next town. In Tabriz, however, they are not responsible because it is already in another province, so we decide to go to Orumiyeh as advised. But in the provincial capital Orumiyeh we are referred back to Khoy because they do not feel responsible. After we have invested a total of almost two days in this matter, we decide to leave and see what comes next. We expect not to end up in jail for that.

Buying a SIM card also takes a good half a day, as German passports cannot be read into the system. The many helpful Iranians all have several SIM cards for reasons of anonymity, so the permitted limit of the number of cards has often been reached and it is therefore not possible to borrow their identity for the purchase of our SIM card. But at some point, a young, English-speaking Iranian sends for his father, who is actually ten minutes later in the Irancell office and helps us.

The supply of money is not easy either. Since Iran is completely cut off from the international payment system due to the sanctions, no foreign credit cards work (neither for getting money at the cash machine nor for paying in shops). Only cash works, but our Euros or USD must first be exchanged. Banks don’t do that and finding a money changer in these tourist-free times in the provincial town of Khoy is anything but easy. The currency conversion complicates the fact that although the official currency “Rial” is printed on the banknotes, due to the high amounts in the millions, “Toman” is spoken of everywhere, for which 4 (or was it 5 ???) zeros must be subtracted.

After these challenging initial problems, we are slowly beginning to be able to enjoy Iran in all its impressive diversity and contrasts. The area around St. Stephanos Church, located directly on the border to the Azerbaijani enclave Nakhichevan, gives us a first foretaste of the mostly barren mountainous world in Iran. The carpet capital Tabriz impresses not only with one of the largest and most beautiful bazaars in Iran, but also with strong contrasts between modernity and tradition. And the Orumiyeh Salt Lake sadly illustrates the consequences of human interference in nature: within just 20 years, the lake, which was once the size of 10 times that of Lake Constance, lost 95% of its volume because the water inlets were diverted. For decades, Iran has used many times more water than is supplied because of the numerous splendid, but irrigated gardens, as well as the self-sufficiency economy caused by the international sanctions … which of course also includes irrigation-intensive agriculture.

With the fire sanctuary Takht-e-Soleyman, idyllically situated in the mountains, and the mausoleum in Soltaniyeh, where a descendant of Genghis Khan was buried in a huge dome building in the 13th century, we visit two UNESCO world cultural sites in one day.

Then it goes into the solitude of the impressive Elburs Mountains. The rugged, barren mountains of the Alamut Valley, paired with autumnal gold-red colored poplars, create a unique setting that tempts you to dream. Everything looks like in a fairytale valley, which could also fit perfectly into the repertoire of a location scout for first-class Hollywood films. But then the spectacular serpentine descent, on the smallest of slopes down to the Caspian Sea, brings us back to reality. Together with the Sani-Pass in Lesotho, this is certainly the most difficult driving that we or Shujaa have had to master so far. The corners are so tight that we sometimes have to reverse twice. Drivers of smaller trucks and cars watch the spectacle. As soon as we have reached the bottom of the Caspian Sea, it starts pouring rain … Timing is everything! We wouldn’t have wanted the rain on the steep earth road in the mountains …

But it’s not just because of the weather that we leave the world’s largest inland lake again quickly: the coast is completely built up with dilapidated buildings in the former Eastern Bloc look, with a few old mansions in between. The few, accessible beach sections are completely littered…. It is therefore incomprehensible that this is one of the most popular holiday destinations for many Tehrans.

Tehran itself is a huge mole hole with an estimated 15-20 million inhabitants. The streets are incredibly big. The routes into the city run in six and eight lanes and the drivers pay no attention to any lanes. They just drive the way they want. Coming from the left and right, they overtake us with minimal distance. No hand fits in between. Our hands get wet. After our parking lot in the north of the city, at the Tochal cable car, is closed to trucks, we have the pleasure to drive completely to the other end of the city during rush hour and darkness, where we find the huge parking lot of the even bigger Chomeini mausoleum…with a direct metro connection to the city center.

Two very stressful driving days are followed by the challenge “Tehran Sightseeing in One Day” program. A deliberate decision, because we want to get back to nature quickly. But thanks to the well-functioning metro, we not only find time for the main sights (including Golestan Palace and Niavaran Palace, where the last sheikh is said to have fled into exile from the roof by helicopter when the Islamic revolution started), but also visit a friend of Karin’s in her beautiful apartment in the north of the city.