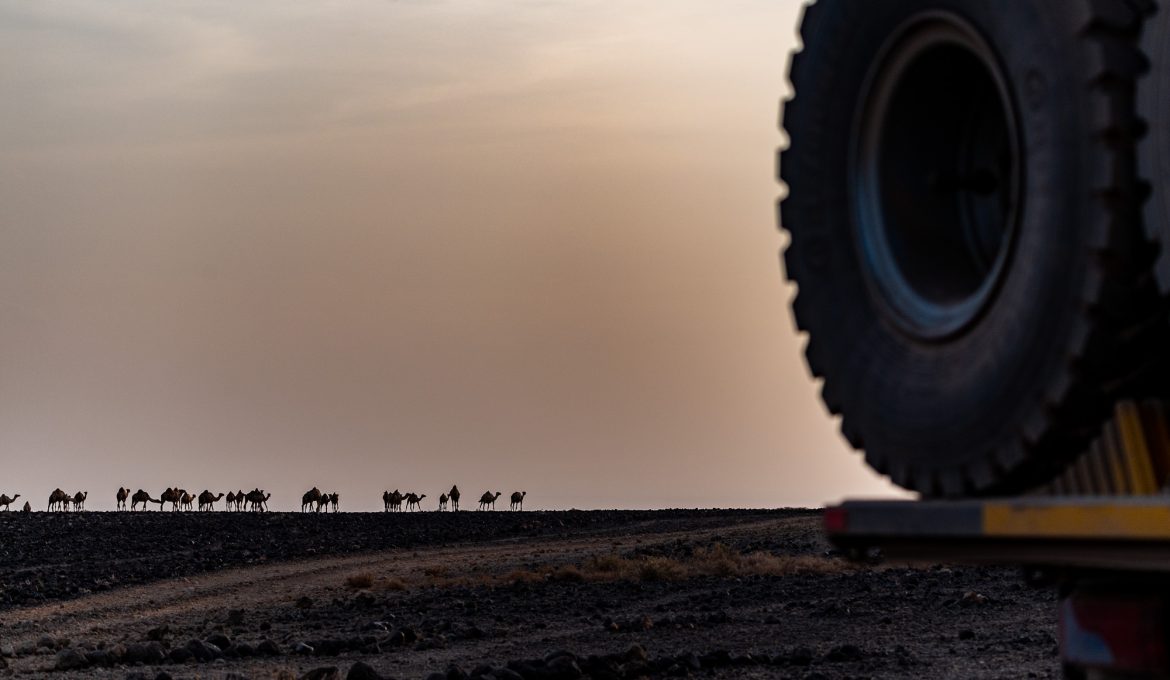 After the dusty loneliness of the Rift Valley and the great national parks Amboseli and Tsavo, we need some rest: e.g. palm trees, turquoise sea, white sandy beaches etc. and so we spontaneously drive about 300 km to the coast south of Mombasa. On the campsite of the Twiga Lodge, a little north of the more touristy Diani Beach, we find exactly what we need in order to relax: a place on a beautiful lawn under large baobabs and palm trees, slightly elevated above a secluded sandy beach with a view of the turquoise sea …it could not be any better! And nice amenities such as power connection (so that our built-in air conditioning can run through at night, with the tropical / humid temperatures here), water connection, restaurant and local food supply are not missing. Fishermen bring freshly caught fish to order, which with its exotic colors looks far too beautiful to put on the barbecue in the evening. Motorcycle drivers sell vegetables and fruits. A true paradise and – should we not be able to travel onwards to Ethiopia (the land borders are still officially closed) – we will come back here to before shipping Shujaa back from Mombasa to Europe … we will see.

After four very relaxing days, our batteries are recharged and we start the annoying drive to Nairobi: we thought the Tan-Zam Highway in Tanzania was hell as far as truck traffic is concerned, but we find an even worse route here. It feels like every decrepit truck in Africa creeps up the mountains at a snail’s pace, cars make the most daring overtaking maneuvers and we try to keep up with them 😉. Due to the left-hand traffic, my co-pilot Karin has a particularly responsible role: I drive slightly out of lane, she “sniffs” whether the opposite lane is free and then I either accelerate or do an emergency stop and line up again behind the trucks.

After over 500 such overtaking maneuvers and a short service stop in Nairobi, we arrive at the Castle Forrest Lodge near Mount Kenya. What a difference! It looks like in the Swiss mountains: green meadows, mooing cows and refreshing mountain air at over 2,100 meters. Mountain rainforests with huge ferns and waterfalls surround the clearing and the next day we do a five-hour hike with a very good guide to one of the waterfalls. In addition to the omnipresent Mount Kenya, we see many chameleons on the way. The 250 km ring road around Mount Kenya then leads us through the most varied vegetation zones in a very small region: tropical and humid on the south and east side, savanna dry on the north and west side.

Passing Thomsen Falls we reach Lake Naivasha: At first, we are disappointed because of the many flower plantations, some of which are no longer used, but then we find another great camping spot at Camp Carnelley’s directly on the lake under many fever trees where we spend three nights. The nearby Hell’s Gate National Park is the only national park in Eastern Africa where you can also hike and bike due to the absence of wild cats. The funny thing is that we see a lot of paw prints in the sand … Of course, we take the opportunity immediately and rent bikes – but Karin drives the last km back by taxi: The sun intensity right on the equator in combination with the corresponding temperatures and hard, uncomfortable mountain bikes demand their victims….

Slowly we head north: in the provincial town of Eldoret we stamp out our passports and carnets as we want to enter Ethiopia on the lonely eastern shore of Lake Turkana (where there is no Kenyan immigration and customs). Then we drive along the great Kerio Valley (also part of the Rift Valley) to the completely flooded Lake Baringo. No lodge is functional here after the extreme rainfalls of last spring – everything is flooded. Along small slopes to Maralal we have another mud fight with nature after some heavy rainfalls (which Shujaa finally masters brilliantly). In Maralal we set off for Lake Turkana with our travel friends Margit and Theo. We were already on the road with them at Amboseli and Tsavo Nationalpark and had a lot of fun. And traveling with two vehicles in this extremely inhospitable, lonely area is certainly not a disadvantage. A few days ago there was still heavy shooting in the mountains north of Maralal between rival tribes (probably a cow or goat was stolen again) and the military had closed the route. But now it is quiet and we can drive north unmolested. Even in the notorious town of Baragoi, we are neither ambushed nor robbed – although we have to stop to organize a suitable screw for Shujaa’s rear lift, which we lost on the jogging slopes.

The landscape around and at Lake Turkana, which lives up to its name “Jade Sea” when driving over the mountains, is spectacular: wide and extremely inhospitable volcanic and sandy deserts paired with a never-ending extreme wind and temperatures that do not drop below 33 degrees at night. There are also a lot of camels. A great experience, as well as meeting local Turkanas, but we can’t stand it here for too long in these extremely adverse climatic conditions. We set off to Marsabit via North Horr with a stop near Kalacha – again a little higher elevation and with tolerable temperatures. Because our rear hydraulic rear lift still worries us a bit on these extremely hard slopes and we have to have something welded, we refrain from our original plan to drive up Lake Turkana all the way north and there to cross the “green” border to Ethiopia at Illeret / Omorate.

Maybe we would have been more successful there, maybe not: anyhow, when we try to cross the land border to Ethiopia a few days later at Moyale, which is still officially closed due to Corona, we lost our existing Corona travel luck. The border station is deserted, we first have to look for people in charge and they are not even interested in our eVisa … all of which are not good omens! The land borders are closed with the exception of Djibouti – Period! My comment that “there is always a solution” in Africa and that we have to bring Shujaa back to Germany is well understood, but does not change the situation. After a long discussion, we turn around frustrated and don’t really want to admit that our current trip to Africa is at a turning point. With the alternative of trying it over the “green border” at Omorate, we are deterred by the assumed low probability of success in combination with 300 terrible kilometers of slopes in extreme climatic conditions. Even if we were to make it across the border there, the onward journey through Ethiopia to Sudan would most likely no longer be possible due to current border conflicts between these two countries. So, we’re going south again.