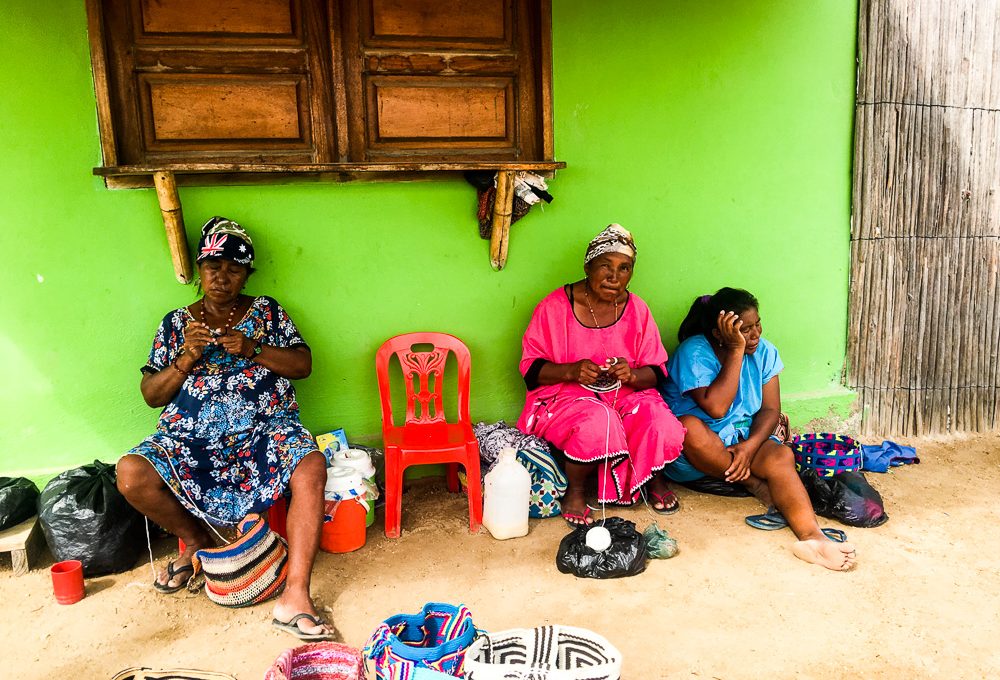 After the extremely humid temperatures in the swampland around Mompos, we drive to the peninsula of La Guajira, the northernmost tip of South America. In the southernmost point (Tierra del Fuego) and westernmost point (coast in northern Peru south of Zorritos) we have been in the last 8 months already and much we have heard from the few travelers who ventured into this “stateless” area of ​​the Wayuu Indians this region: bitter poverty, countless roadblocks with begging children, raids, mud pots in which entire Jeeps sink completely and without any warning directly next to the track, petrol and people smuggling from Venezuela, etc. Neither the Colombian state to which the province La Guajira officially belongs, nor Venezuela (who are known to have quite different problems at the moment) feel responsible here and the Wayuus thus lead their own lifes and are proud that even the Spaniards in colonial times have failed to bring this area under their control.

Somehow this makes us curious and maybe we find here the true adventure, that we have missed a bit so far in South America? To cut a long story short: we found it, but this time even without getting stuck with Shujaa in a lagoon or a mud hole.

Everything is different in La Guajira: there are no petrol stations where you can refuel gas or fill up with water, but only stalls with canisters of petrol smuggled from Venezuela. Not a real option if you can refuel up to 800 liters. Everywhere it is dirty and there are self-erected roadblocks: the hand being held up for begging – especially by small children, who are therefore unfortunately conditioned very early and prefer to beg than to go to school. Sometimes there are roadblocks every 50 meters. However, most children drop the ropes at the last moment, if Shujaa does not slow down.

We drive through this inhospitable environment with dense cactus deserts to Cabo de la Vela, a remote kite and windsurfing hotspot. There, a German-Columbian couple has built a nice bar with surfing and kite equipment and a few hammocks for overnight accommodation. We are allowed to put Shujaa in the slipstream of the surf shed, because there is a really hard wind blowing there.

Much of the Wayuu women’s dark skins and colored robes remind us of sub-Saharan Africa, which contrasts with the otherwise civil Colombia. Maybe that’s why the area is so appealing to us.

We are strongly advised to take a jeep with driver for the next day`s scheduled trip to the northernmost point of South America – the Punta Gallenas. Since the slopes are hard to find, the cars like to sink in the mudpans and the roadblocks are annoying, we decide after serious thinking (after all, we are individual tourists) to accept this offer. A wise decision, as it turns out, because the next day is even without driving, stressful enough: at 5.00 h in the morning the driver picks us up, it rains in torrents and quickly we drive through the deepest mud to the north. Our driver – a Wayuu – does not deviate an inch from the track, even in the rare occasion of oncoming traffic. He says that then he would be stuck immediately. At the roadblocks he distributes many sweets to the children and portrays the generous macho, according to the motto “I as a tourist driver have made it”, and counts down the sweets. At an insane pace, we race across now completely wet salt lakes and I think several times, how lucky Shujaa should be with such a reasonable and considerate driver.

After more than 3.5 hours and a short trip through Mangrove arms by boat we almost made it: we change to another jeep and after another 30 minutes ride we are there: Punta Gallenas, the northernmost point of South America. It is an intense feeling for us to have criss-crossed the South American continent 35,000 km after just 8 months, and now to look into the Caribbean in this beautiful no man’s land. Somehow we are also proud and satisfied – a first important milestone has been reached. From now on we will go back south on the continent and via Ecuador and Peru to Brazil along the Transamazonica. The next adventures can come. The return trip to Cabo de la Vela is no less exhausting despite meanwhile dried off tracks. In the evening, the drinks at our pitch directly on the beach taste all the better.

The southern coast in the province of La Guajira is no less beautiful: it is greener, the first palm trees are growing and everywhere we have dream overnight spots right on the beach and are completely to ourselves. Only strong wind, hot sun, turquoise sea and a few native fishermen who provide us with fresh fish. That’s how we imagined the Caribbean.