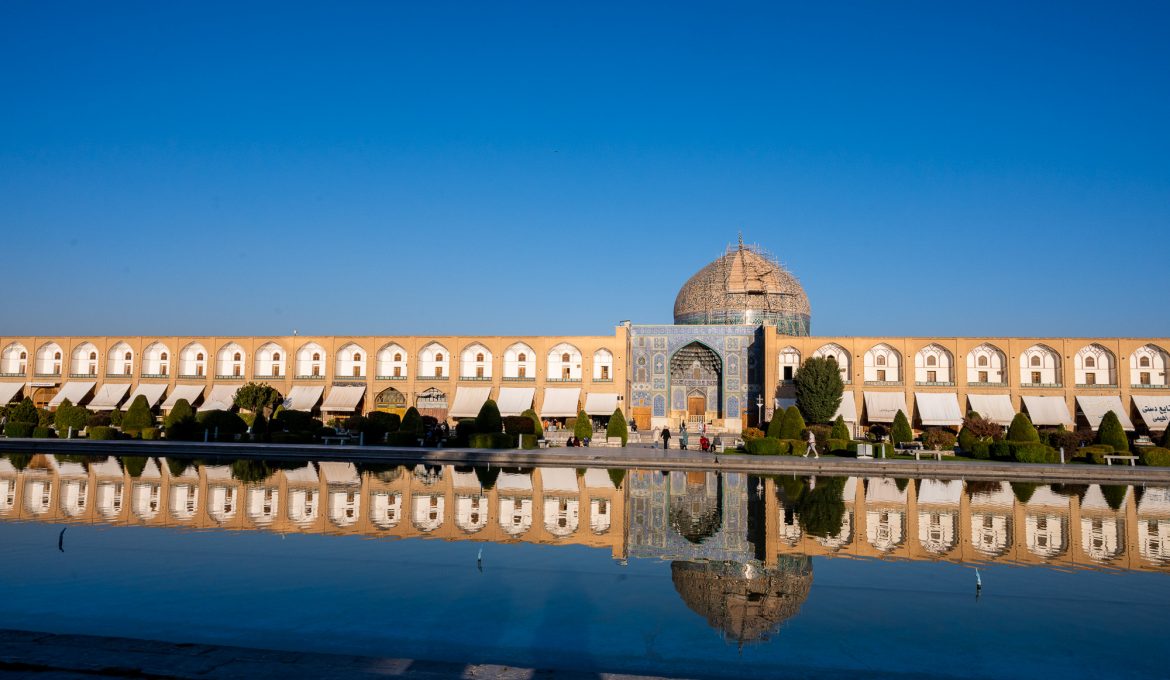 We are happy to have left the huge city of Tehran and are heading for one of the three major pilgrimage sites in Iran: Qom, the ultra-conservative center of the Shiites. Quasi the Iranian synthesis of Oxford, Vatican and Altötting. The tomb of Fatima which we visit (the daughter of the 7th and sister of the 8th Imam, to be precise 😉) has been expanded over the centuries to become a Shiite national shrine. Karin needs forever to get out of the locker room: they are not expecting tourists at the moment so a chador has to be found first. The mosque complex, as well as the mausoleum, have huge dimensions and with their magnificent mosaics can hardly be surpassed in their beauty. At the end of the day, our guide gives Karin a prayer stone that he bought especially for her. This is Iran!

Before we go to Kashan, we make a detour to Maranjab in the Kavir desert. Salt lakes, dunes and everything that characterizes a desert. Unfortunately, it is Friday and many Iranians are doing their favorite hobby – picnicking – as well as driving passionately through the dunes with jeeps and quads, almost like the Arabs. So, the lonely desert feeling we like so much doesn’t really come up that much!

Kashan, on the edge of the Kavir desert, has developed in recent years as a sought-after second home for wealthy Tehrans and, in addition to a very atmospheric bazaar, great mosques, perfectly renovated old trading houses, also has a very lively art scene. Karin’s friend from Tehran, whom we only visited three days ago, has meanwhile also arrived at her house in Kashan and so we quickly get to know a lot of very interesting people and can hardly save ourselves from dinner invitations. A great city and we park right in the middle with Shujaa.

Before we continue, let’s fill up again: 6 Euros for 200 liters of diesel! It’s a pleasure every time!

Isfahan, the city of cities in Iran, is our next destination. Despite its size with three million inhabitants our search for a parking space is much easier than in Tehran and we find a great street parking in a centrally located, but very quiet, luxury residential area. Mansour, an acquaintance of good Overlander friends, takes care of us almost around the clock for the next two days. One evening we drive to the suburbs of Isfahan to meet friends of Mansour, and have a great evening with self-grilled kebabs.

At night we have contact with the so-called “secret police” for the first time: they get us out of bed, want to know everything exactly (where from, where to go, why, etc.) and they probably also have observed Shujaa for a long time before our evening arrival: at least they wanted to know who had dropped us there about two hours earlier (Mansour). Everything is done very politely, correctly and using the Google translator we can go back to sleep after 20 minutes.

We have read a lot about Isfahan, but we would never have thought that the Persian splendor could be so distinctive. The pictures speak for themselves and the very best: we are almost the only tourists who can enjoy it, it is empty everywhere and people are especially happy about our visit…. Similar to what we were already able to experience during the pandemic times in Eastern Africa!

After so much city sightseeing (always very exhausting) and socializing, we thirst for solitude and peace: we find this in the desert east of Varzaneh, at an old, lonely caravanserai. Here we spend the entire day and at the end we have the highlight of the day: a sundowner on the roof terrace of the Karvanserei.

We continue to the east through completely lonely landscapes and we approach the desert of Kavir again: well-preserved, but abandoned mud towns like Kharanaq line our way before we reach Yazd.

In this well-known desert city, with its striking wind towers and its old town built entirely from clay, we notice for the first time how empty destinations can be that are mainly visited by foreign tourists. Unfortunately, many restaurants and some sights are also closed. In the cities visited before, the Iranians and domestic tourism provided a pleasant “background noise”, but the old town of Yazd has died out. So, we’re heading south a little faster than planned, towards Shiraz.