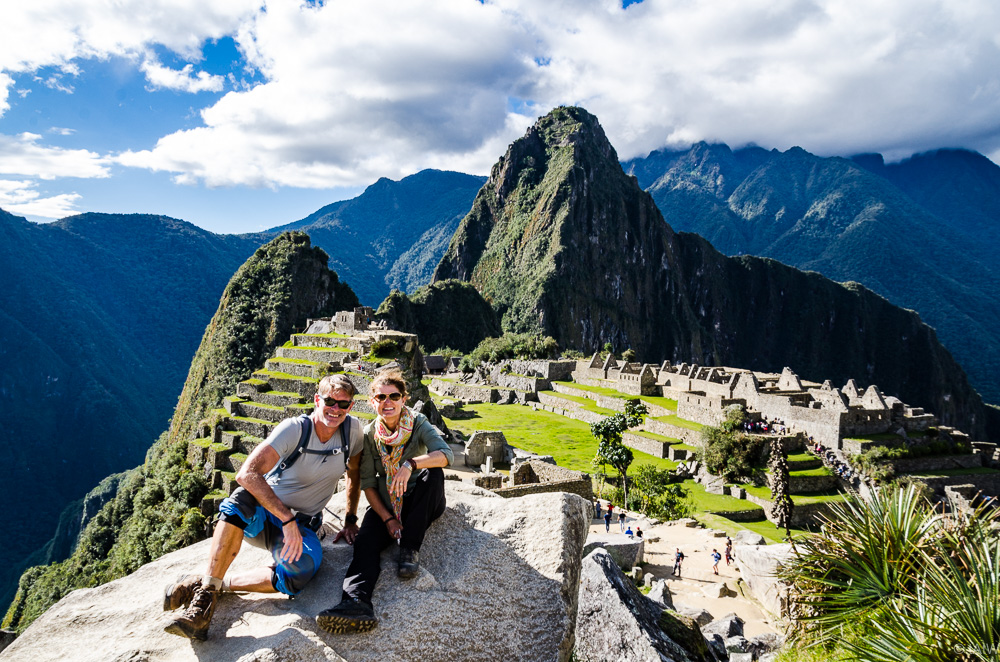 Sometimes, even with well-organized Overlanders, everything comes differently than you might think or plan: we celebrate a rushing wedding, have a sit-in barbecue next day, make lasting experiences with a shaman, and visit Cusco, the sacred valley on the Urubamba River with many Inca sites and of course the Machu Picchu.

But one after anonther.

Responsible, for these partly unusual experiences for us, is mostly Piero. We got to know Piero as a driver of a service truck at the Dakar Rally in Northern Argentina this January, or he met us. He had seen Shujaa in the rally bivouac, was so fascinated but could not find us anywhere. The next day he accidentally saw us driving past the edge of the rally track, braked his truck in front of Shujaa, dusted us – sitting in our camping chairs outside and waiting for photo shoots – and then introduced himself as Piero. It turns out that when he is not driving a service truck during the Dakar Rally, he runs his own high-end travel agency in Cusco …. not impractical for our later plans, so we stayed in contact with him over the past few months, not to mention that we found him very refreshing, extremely nice and sympathetic. It also turned out that he is also currently building his own expedition mobile in Lima and has already traveled with a camper and his family of five from the US to Patagonia. So many things in common.

On the eve of our planned arrival in Cusco, we received a WhatsApp from Piero inviting us to the wedding of a good friend of his, the next day in the nearby Valle Sagrado on the Urubamba in Lamay. Karin always wanted to be at a South American wedding and as we did not have too much contact with local people and their way of life, we spontaneously accepted the invitation … .. seldom did we celebrate so well, danced so much and so much Pisco drunk …. And we have rarely seen such relaxed people, so warm and loving each other. It immediately colored us and made us very relaxed. Karin was completely delighted with the friendliness and togetherness. We parked Shujaa about 300 meters away from the wedding and he was able to fulfill his role as “party mobile” for the first time. Unfortunately, Karin fell heavily on the way home after losing one of her ballerinas on the gravel road. With scraped palms, face and knees and completely filthy she climbed into our rolling home. Somehow she likes to kiss the earth …

The next day, the party continued. A good friend of Piero and his very nice and pretty wife Patty – in front of whose property we had “accidentally” parked – invited for breakfast, in the course of the day more and more friends passed by, at 15.30 h the chicken in the oven was finally ready and at around 4.30 pm, the hosts were the first to leave the party because they had to reach the plane to their first home in Lima – the guests and a big food chaos stayed behind, without the atmosphere was any break. Nobody was surprised or even set off, everyone was welcome in the open house and in the wonderful garden. For us a very interesting experience, which shows us once again that we Germans often hinder us because of our excessive organizational and security delusion and rob the fun of the actual cause. By all means, we felt extremely comfortable and welcome.

In the evening we went to Pieros and Patty’s house to Cusco, parked Shujaa in his front yard and next to great discussions we planned with his tour and event expertise the next week.

The decisive factor is the number of tourists on the one hand, at what time one visits the corresponding sights in Machu Picchu and in the Urubamba Valley, and on the other hand, which one of the different arrival routes to Machu Picchu one chooses. Of course, many also make a multi-day tracking trail, which we had initially come up with, and makes sense. However, we deliberately decided against it after really long deliberation. So we thought that we have so many opportunities to go hiking that we do not need the most visited tourist spot in South America. So go, look, and back again.

With a detailed time and sightseeing schedule, as well as all the necessary tickets and permits, we went to the week: Cusco, the many attractions in the Sacred Valley of Urubamba and of course Machu Picchu. Based on Piero’s input, we decided on the following variant of visit, which we can highly recommend: 300 km (from Cusco) long journey along the most beautiful mountain trails to Santa Teresa in the north of Machu Picchu with accommodation there, early in the morning beautiful walk from the local hydroelectric power plant along the railway line for 12 km to Aquas Caliente, in the afternoon visit of Machu Picchu to the closure, overnight in Aquas Caliente and the next morning return hike to Santa Teresa. Because you do so anticyclically to the main tourist streams the tour, you are relatively (!) alone on the road. During our two-and-a-half-hour hike along the train tracks, we only met 4-5 tourists despite the main visiting season and from 3 pm on, Machu Picchu is much emptier, as many visitors return to Cusco on the same day.

For us, Machu Picchu was the first wonder of the world we visited to exceed the high expectations: The location, the size, the mysticism are impressive and we were very lucky with the weather and our well planned arrival and departure. Accidental or accidental upgrade to the best hotel in Aquas Caliente made the trip perfect … .. thanks Piero!

Now you might think, after this tightly timed visit program, there is a break …. But far from it: we had to “give” another highlight of a completely different kind. Karin, because of her spiritual inclination, also wanted to experience something similar in South America to India, and she had been researching shamans for a long time. However, many did not seem to be authentic enough, but more geared to tourists looking for experience. Again, Piero and Patty could help on the basis of their own experiences … and I was just curious about what’s going on with them. Since the ceremonies of this shaman were rather rare and the next day we returned from Machu Picchu, we walked 12 km along the tracks to Santa Teresa in the morning from Aquas Caliente, again over 200 km on mountain trails to the upper Urubamba valley back to attend an evening / night ceremony of the shaman “Alonso”. Well … that was very special.

Last week was probably one of the most intense of our trip …. But also one of the most beautiful, which we will not forget so quickly. Getting to know Piero and Patty and spending time with them was so beautiful and so relaxed. We hope that we can meet again and spend many wonderful days together. Maybe in Africa.

And then we visited the Rainbowmountain on the way to Brazil, but in the snow, and enjoyed the beautiful descent from the Andes with stunning views of the Ausangate National Park with its mighty glaciers. The Amazon is waiting for us.