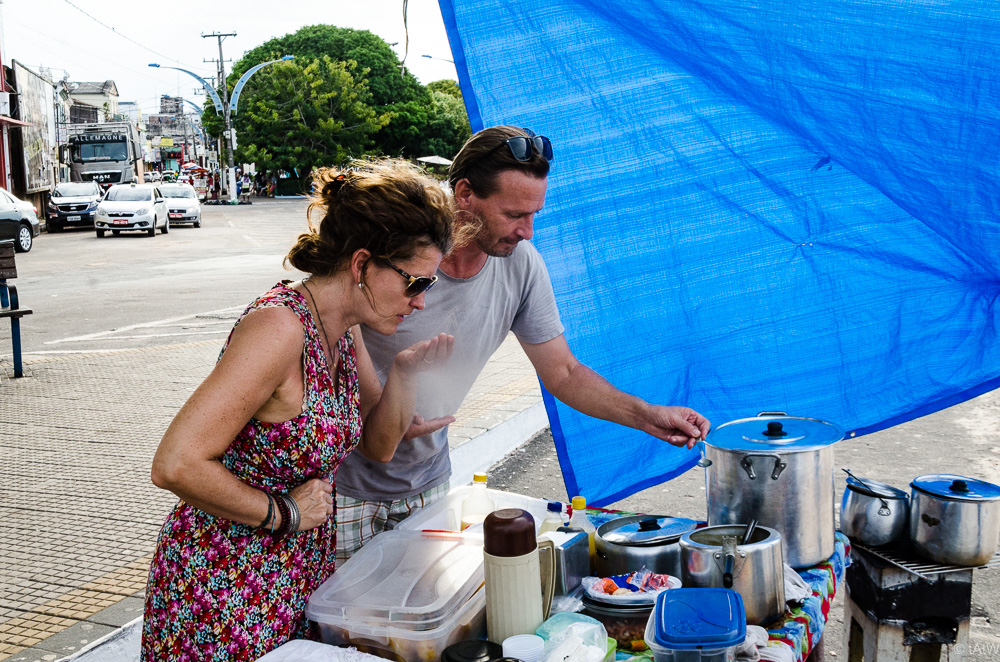 We see many new things to eat and in restaurants on our trip. From Cevice to Pisco Sour to heaps of empanadas. But we all know that from Germany too, even if we do not get it on every corner. Then there are things like cuy (guinea pigs) or maggots among the indigenous peoples of the jungle, of which we have heard at home but are rarely on our diet.

However, in and around Santarem, more or less in the heart of the Amazon, there are food items that for the first time have come to my mind even as a person very interested in food and nutrition. And that is available only here. Dieter, a German in Santarem, explained a few of them to us. And I did some cooking and preparation with Mariana, the wife of captain Vitor Lima that has helped us w/r to secure overnight spots a lot. Of course, we tried everything.

The white flakes, more reminiscent of grated coconut, are made from cassava root and kept in the refrigerator. There is something finer or spherical. The globules were in our sweet hypodermic bubbletea for a while and are used for ice cream. It is relatively tasteless, but versatile. What I really liked was the tapioca, which is made into a kind of pancake. The powder is sifted into the pan, where it becomes firmer. A little salt on it and according to taste with bananas, only fine butter or cheese it becomes a great breakfast.

The açai berry has been known to us as “superfood” for a while because it’s supposed to be extremely healthy (it’s supposed to cure cancer, make you look slimmer, remove wrinkles, protect against heart disease, stimulate sexually, …) and especially rich in Antioxidants it is. However, since it spoils within 36 hours, it is “only” available as powder, juice or capsules. Here you can buy them mashed fresh. And that is unique. Even as a breakfast: I love it with a little bit of sweetened protein powder or powdered milk, because it is just a little bit harsh. What I found extremely surprising was how quickly my body responded to açai. I immediately felt a push for my metabolism and felt more natural about my hunger and thirst.

This soup can be bought at the street stands from the local housewives. It consists of various ingredients that are served together in a coconut shell. A yellow soup (tucupi) again made from manioc, which is quite sour, green vegetables (jambu), which is raw highly poisonous, but cooked tastes like spinach after 10 minutes, a mega-looking transparent, gelatinous mush (Goma) also from cassava, Amazon shrimps and a spicy sauce. Nothing for us, but interesting. Dieter likes it a lot.

This delicious cake is also made from cassava and coconut. It is very sweet, yellow and has a consistency like “Grieskuchen”. Extremely tasty.

Made of roasted cassava flour, which is served with all dishes – even in Brazil. Somewhat habituation, because rather tasteless, but extremely crispy and therefore delicious. Similar to ours in Badish the “Abgeschmelztes“, which tastes even after a while but still much better. Hm …