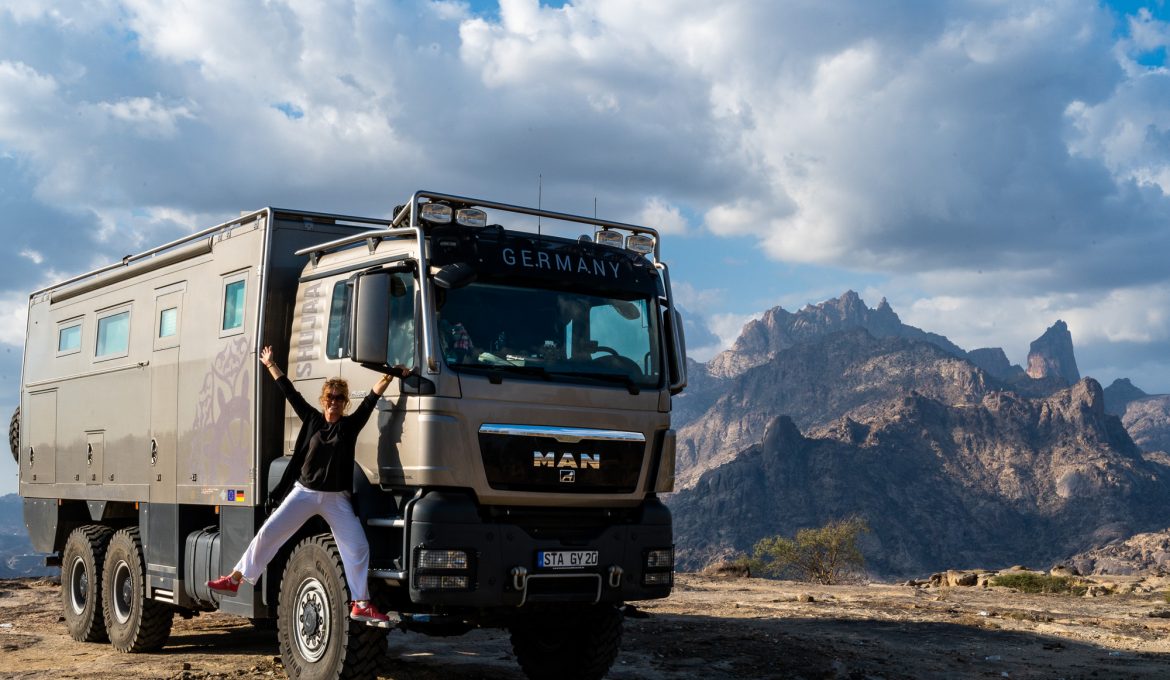 Saudi Arabia is the great unknown on our current trip of our world tour. Tourist visas were only issued from the end of 2019 onwards and then Corona came … so hardly any tourists have visited the country so far, there are no up-to-date travel guides and other information is also very difficult to get. However, Saudi Arabia has chosen tourism as an important future industry – like the Emirates – in order to reduce its dependence on fossil fuels. We are therefore very excited. It is well known that discovering a country at the very beginning of its tourist development offers a very special experience.

We are entering the first border crossing between Oman and Saudi, which had been announced for a long time but opened only two weeks ago – once again we are very lucky with our timing! The special thing about this border is that the following route leads right through the core of the Rub Al Khali desert, the so-called “Empty Quarter”. In this largest sand desert in the world there is…. Nothing! The entry to Saudi is very friendly, we have never been given dates and water on entry before or been invited to coffee. Directly across the border we can stock up on diesel for € 0.15 / l, after which there are 600 km of spectacular, red sand dunes. No place, no business, no people, no animals, no possibility to buy a SIM card or to get cash. This endless expanse, the grace of the dune shapes and the contemplative silence undoubtedly make up the charm of this desert crossing – the road itself is a well-developed, paved desert highway. The driving challenges only come when you want to find a nice overnight place to stay, off the highway, in the imposing sea of ​​dunes.

In Riyadh, after more than 1,200 km driving in Saudi, we finally find infrastructure. Otherwise, Riyadh is competing with Sao Paulo for the ugliest cities in the world that we have visited so far: huge dimensions, extremely littered and – perhaps surprisingly – with a rather shabby infrastructure. Especially compared with Oman, where all public buildings are brand new and lavishly refurbished, Saudi Arabia looks quite poor in comparison. It is also a shame that – not only in Riyadh – many sights are closed or are currently being renovated; but maybe this is also due to Corona. We also have fog and rain, so we quickly tick Riyadh. The people, however, are consistently very open and open-minded and are visibly happy about the unfamiliar visitors.

The edge of the so-called “Edge of the World”, however, is spectacular. About 120 km north-west of Riyadh, the plateau falls over 300 meters deep and particularly bizarre sandstone formations have formed. A few weeks ago several expatriates fell down the cliff in their jeep (you can still see the smashed car), so three large, steep earth walls were piled up to block access for future visitors and thus potentially prevent similar accidents. However, we get out our “all-purpose weapon” Shujoo and we actually manage to drive over the steep ramps and advance to the edge – a little “extra challenge”.

The 900 km long drive from Riyadh through the desert to Abha in the south of the Asir Mountains is unexpectedly varied and we pass impressive granite stone formations. The Asir Mountains themselves, with mountains up to 3,000 meters high, flank the Red Sea as far as down to Yemen. It separates the inland desert from the coast over a distance of several hundred km. For us it is one of the most spectacular mountain range that we have seen so far. There are both round, eroded and extremely jagged granite mountains (reminiscent of the Dolomites), interspersed with a few but impressive old stone villages with strong Yemeni influence. We find great pitches, are invited to dinner by hospitable locals and make extensive excursions with Shujoo. We drive up and down slopes that exceed everything we have seen in the world so far and considered drivable in terms of steepness and exposure – even our all-wheel-drive quad is reaching its limits. The adrenaline-filled experiences are unique! As in South America, the small pass roads are the absolute highlights of this region. Unfortunately, these are officially forbidden for trucks, but without having driven some of these wonderful roads the area would only be half as beautiful. In contrast, the large high-altitude road, which is often covered in fog, rarely offers great views.

We leave the region and another highlight is approaching with a visit to the Dakar Rallye.