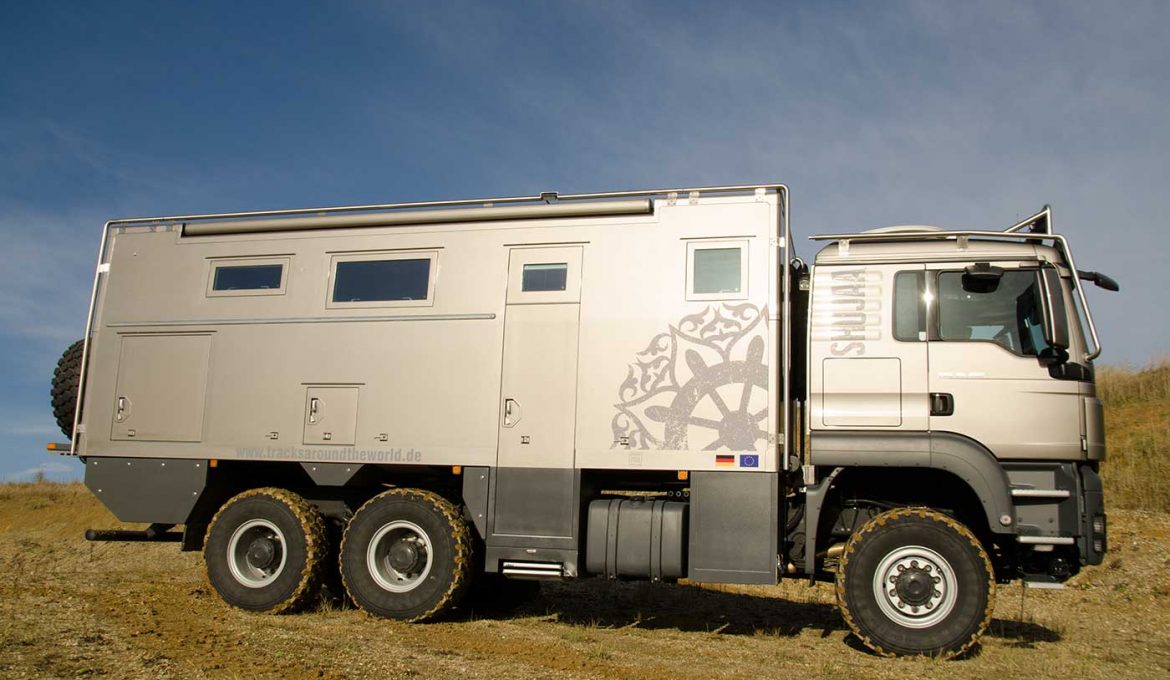 Before Shujaa came into our possession in March 2015, we were also given extensive consideration. The initial idea of ​​incorporating an all-wheel-sprinter with a corresponding structure into the selection was quickly rejected: too little payload and comfort (we are not a classic camper and also the 6.65 m length on our three-axle was very crowded at the beginning in front). This also leads to insufficient self-sufficiency for the trips we have planned to very remote regions. So we were fast on a truck chassis.

Because of our space requirements and the desire to take a quad bike as well as mountain bikes on the world trip, we finally decided for a three-axle – a two-axle vehicle would have reached its limits in terms of the payload reserves as well as the rear overhang / slope angle in heavy terrain.

However, we wanted a compact design for a three-axle vehicle – with a suspension length of 6.65 m and a wheelbase of 4.20 m – we stayed at the lower end with corresponding advantages for off-road handling and handiness. Also from the lowered floor plate for the quad garage, which was proposed by some builders, we took a step back in our new planning because we did not want to make any cuts at the slope angle or the structural stiffness. Instead, we have an internal height of 2.10 meters realized which even without a lowered floor plate in the quad garage leads to a sufficient height above the rear bed and also a very “airy” space feeling – with a size of 1.96 m (Oliver) one not To be underestimated.

During our selection process in 2013/2014, we realized that newly approved chassis can only be approved with Euro 6 from January 1, 2014 onwards. However, Euro 6 tolerates about 50 x less sulfur in the diesel engine and is therefore completely unsuited for trips to many developing countries, so that only one Euro 5 vehicle was considered. In practice, this meant either to buy a suitable, well-maintained second-hand expedition vehicle (which, after many visits throughout Germany, proved to be very difficult, since something “did not fit”) or a new Euro 5 chassis and with different nationalities Still available until the end of 2014.

We opted for a double strategy to widen our options: ordering a Euro 5 chassis and, in parallel, further searching for a suitable, new-looking used vehicle. If we did not find the latter, we wanted to set up a new, tailor-made design for our Euro 5 chassis at a later date – we had already signed contracts with a bodybuilder. Two weeks after the delivery of our new Euro 5 chassis, what happened had to happen: We found our used, newly-upgraded dream expedition mobile in Austria: it had all the features that we had long before meticulously defined for us (so), was in a perfect condition, Outstandingly processed and just 1 year old with only 35,000 asphalt km. Quickly, an on-site visit was arranged (due to our extensive preliminary work we immediately knew “that is ours”) reached agreement on the purchase price, Toni Maurer once again made a technical check to “calm the conscience” and signed the purchase contract in October 2014 .

Apart from the installation of a clothes dryer, a tailor-made fastening / pull-out system for our quad and the installation of a second spare wheel with a rim, nothing had to be changed – everything fit perfectly as we had built for us. Now we both had to quickly get a truck driver’s license, which also managed quickly thanks to MAN-ProfiDrive and the anticipation grew to the pickup of our Shujaa at the end of March 2015 from Styria.

The vehicle transfer was then a high-light and the whole professionalism in the processing and conception of the vehicle as well as the previous owner was again aware of us. In the first night on the ground we could not really sleep …. Too much we were busy with the processing of the impressions and the documentation of all the operating hints and tips.