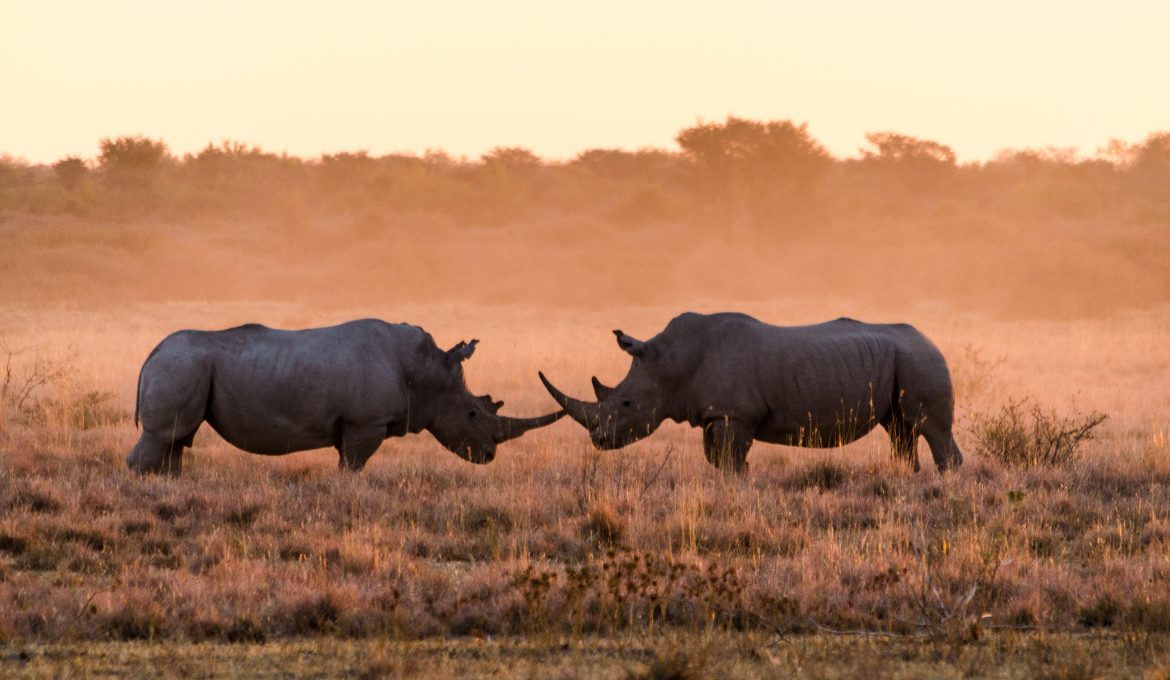 After having diagnosed the problem of Shujoo in a competent workshop in Francistown – the second largest city of Botswana with 100,000 inhabitants – and having ordered the spare parts (new drive belts for the automatic transmission) from Germany via DHL Express, we set off for the easternmost corner of Botswana: the Tuli Block on the border with South Africa and Zimbabwe: there is still very little tourism, although the Limpopo River as a border river to South Africa provides plenty of animal wealth, romantic sceneries with large trees in the river valley and a much more varied landscape with many granite rocks hills than in the otherwise very shallow rest of the country. We are getting excited immediately.

When we do a few internet jobs on the side of the road of a smaller town, there is a loud knock on Shujaa’s door: Erika and Melany introduce themselves – a couple from South Africa with their 25-year-old adoptive daughter, son-in-law and parents-in-law. It takes us awhile to understand this somewhat extraordinary constellation, but then we are totally thrilled with the warmth and hospitality of this family. They also have a smaller expedition vehicle on an Iveco Daily base and are fascinated by Shujaa. We quickly engage in interesting conversations and shortly thereafter we get an invitation to their private concession in the Tuli Block, located directly on the Limpopo river, where in addition to their own house they also have two luxury lodges that are rented out.

We can spend the night there right next to a water hole – only giraffes, elephants, kudu etc. are around us and at night we hear the howling of the hyenas and the hissing of the leopard in the immediate vicinity. We later learn that they actually have 15 leopards on the property – of course after we had already done our “game walk” by ourselves. It has a very special flair to be allowed to stand “privately” on such a huge, fantastic property.

We spend a total of three nights there and together with Erika and Melany do a trip to a neighboring village to find procurement opportunities of Manketti nuts: the two want to build here in the Tuli Block a production of Manketti oil, which is apparently a very good carrier oil for high quality cosmetic products. The two have already set up various successful businesses but this business is meant to be built more for the region and for the people living in their immediate neighborhood. Karin is totally enthusiastic and immediately offers her marketing expertise. It is very interesting to see how the two are very respectful of the locals and establish contacts in a very humble way. We visit different families and can see not only their ways of life, but also the first foundations for the procurement of raw materials is being built.

In the afternoon we do a game drive over the beautiful concession area and visit the two rented out luxury lodges along the Limpopo River. A true paradise, which we have only got to know by an absolutely coincidental encounter on the roadside.

After three days we say goodbye: we really love both of them and their family and we definitely want to visit them also on their farm in South Africa near Krüger N.P.

We continue to Moremi Gorge in the Tswapong Hills – the only waterfalls in Botswana. You’ll feel like you are in another world in this wet and lush canyon compared to this otherwise dry, barren land. Further west, the Khama Rhino Sanctuary is a well-known 4,300-acre conservation reserve built in the early 1990s to ensure the survival of the last rhinos in Botswana. Meanwhile, the rhino population is expected to have risen again from 4 to 60 of both white and black rhinos. Since here again the tracks are too narrow for Shujaa and Shujoo is currently not available, we treat ourselves the comfort of a guided, private game drives. We see 6 white rhinos, two of them fighting male, whose threatening movements look more like awkward games to us. According to our guide, there are no elephants here, but when leaving the campground, the next morning we see many fresh tracks. At the gate we are told that during the night they knocked down the massive fence of the game reserve (to protect the rhinos) and wandered through the area …. That is Africa!

Research on our spare parts for Shujoo, which should have arrived by now, revealed that they were sent by our Quad dealer in Germany “only” by DHL and not – as we requested – by DHL Express (i.e. courier services). An exact status of the shipment is currently also not possible, a delivery more than questionable. Deeply frustrated, we order the replacement parts again (this time they will indeed be sent by DHL Express) and head to Northwest Zimbabwe, where we will visit the Victoria Falls and the Hwange National Park. On the way back we want to make a short detour to Botswana / Francistown and hopefully pick up our repaired Shujoo. So, we again changed our travel plans a bit.