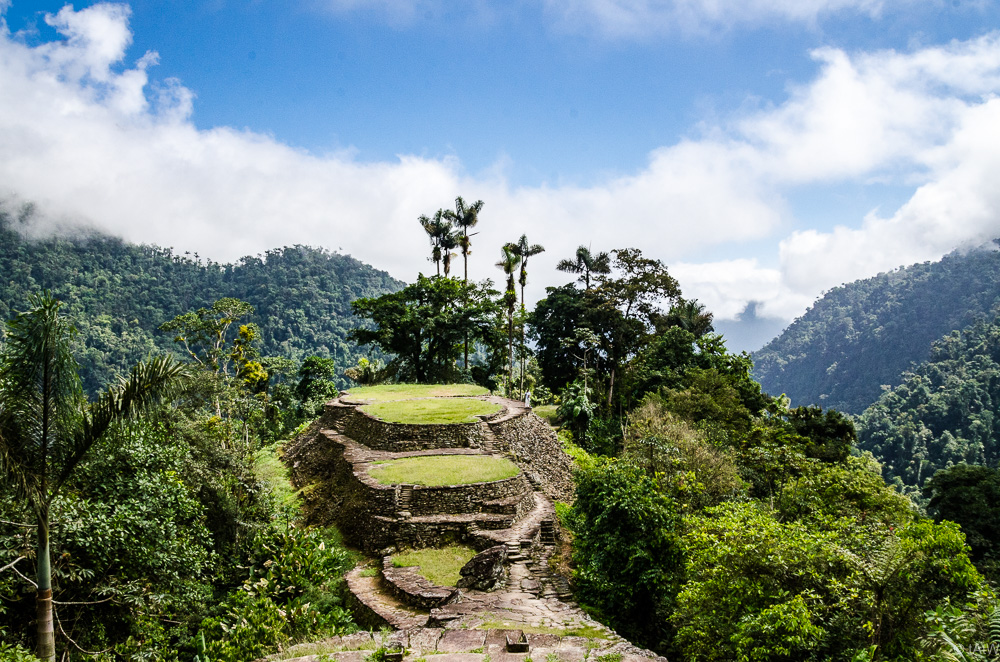 The “lost city” trekking tour – Ciudad Perdida – in the Sierra de Nevada de Santa Marta on the Caribbean coast in northern Colombia is considered one of the best trekking tours in South America and is much less crowded with only about 30-50 visitors per day than e.g. Machu Pichu. The Ciudad Perdida is located in the highest and also barely accessible coastal mountains of the world with elevations of over 5,700 meters and populated with one of the most traditional indigenous tribes in South America.

The lost city of the Tairona Indians is located between 950 and 1,200 meters above N.N. It consists of 200 egg – shaped plateaus 3 to 12 meters long – foundations on which once stood round and thatched dwellings. Only the upper ones, on which the ceremonial sites were located, have been freed from the jungle. The city was inhabited between 700 and 1,600 AD by up to 4,000 Tairona Indians. It was so hidden that the Spaniards did not find it during their colonial campaigns, fell into oblivion for a long time and only accidentally was rediscovered in 1973. After the military withdrew from the Sierra Nevada Mountains in 2013, various guerrillas have repeatedly carried out hijackings of tourists, so that the site is now well guarded by the military again. So, all in all it sounds very promising and that’s why we decide to do this “challenging” tour – despite temperatures of almost 40 degrees and extreme humidity and despite the fact that this is the first multi-day trekking tour for Karin ever.

After we get to the starting point – a small mountain village – with jeeps – we start after a lunch: we are twelve, mixed internationally and have a local guide and a translator with us. The first ascent of 4 hours to the overnight place is well feasible for everyone, despite extreme temperatures. The accommodation is very basic: bunk beds with mosquito nets, a roof made of corrugated iron so you do not get wet when it rains. That’s it. At each of our three accommodations, there is a beautiful river with rock pools and ice-cold water, a blessing for the overheated body and broken feet.

The next day, 17 kilometers of narrow paths, waterfalls, rushing rivers. Sometimes the rivers are crossed over morbid suspension bridges, sometimes barefoot through (for Karin) hip-deep water, sometimes with a small material cable car. Untouched and dreamlike pure nature. The deeper we get into the mountains, the more we encounter the white-clad Kogi Indians. The only means of transport on these small paths to the accommodation stations are horses. We see venomous snakes, monkeys, warthogs, huge spiders and everything else that goes with a jungle. Karin calls herself meanwhile the “Reinhold Messner in the Himalaya” (who runs as slow as she does, only on an elevation of 8,000 m).

On the third day early in the morning, 1,200 mossy steps lead up to Ciudad Perdida and a mystical atmosphere and fantastic views await us on the spacious grounds. I am also proud of Karin, who has made it to this point with effort, but overall problem-free and so we enjoy this moment even more intense.

On the descent, Karin slips out on one of the last of the 1,200 wet steps and, as turns out the next day after we have returned, breaks her finger. She is a tough cookie and you do not really need an index finger to hike. In the evening, our local guide José treats Karin’s fingers and her aching knees with medicine man’s methods (including cooked dead banana leaves with a lot of salt in the pot and then hung up) … it actually works.

On the last day we need to bring the longest stage behind us: the deeper we descend, the hotter and more humid it gets, and on the last kilometer the complete sole of Karin`s hiking boots dissolves …. She really does not have it easy on this tour. José unceremoniously grabs the shoes and her backpack and she continues with borrowed sandals. But we both got along well and are thrilled by these four days of pure nature experience, beyond any civilization. Nevertheless we enjoy the clean shower and toilet in Shujaa even more as well as having the possibility to wash our completely sweaty and dirty trekking clothes in our washing machine.