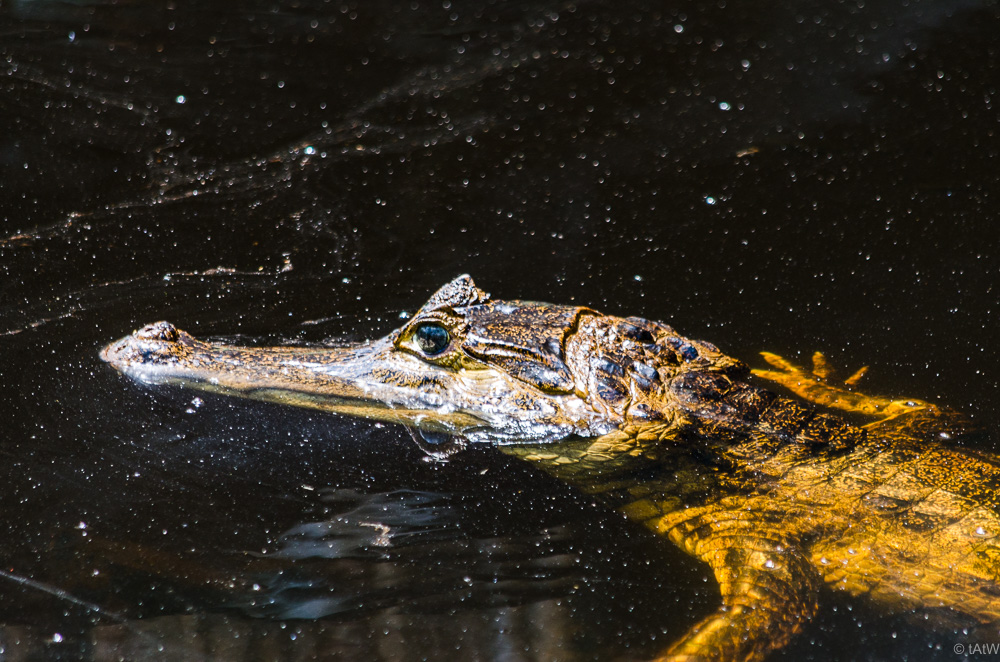 From the volcanic highlands we drive down to Baños and along many large waterfalls into the Amazon lowland. Ecuador, together with Peru, has the highest percentage of primary rainforest and we have booked a remote jungle lodge. On the way to Coca, the starting point of the tour, we drive with Shujaa along small jungle slopes over shaky bridges and through small rivers always along the Rio Napo. Without warning, however, begins a gravel road, we hesitate only in front of a few bridge crossings with weight limits of 10 tons and a large hole between the steel girders. We spend the night on the football field of a small school (there are not many other alternatives due to the impenetrable jungle, if you do not want to spend the night in the middle of the track). There the locals train for a tournament that takes place the next day, the teacher is at the same time the coach, has 10 children and is very nice guy. In the evening, a heavy jungle rain begins with lightning and thunder, which also lasts half the night. The football field we are standing on is still a lake the next morning, but the crossing runs smoothly without getting stuck.

When we arrive in Coca the next day we again pack our travel bag for our 4-day lodge stay. During my jogging exercise I make acquaintance with three local stray dogs: I’m attacked in parallel by all three, they bite me firmly and want, despite massive defensive attempts on my part, not leave off from me. So I get seven heavily bleeding bite marks on my legs and only the courageous intervention of a resident with an iron bar prevents even worse. Due to questionable hygienic conditions, I do not accept the offer by the helping neighbor on site and decide to jog back to Shujaa in pain. After Karin overcomes the first shock when she opens the door, she professionally treats me … and suffers more than I do. Fortunately, we are perfectly equipped with our comprehensive travel pharmacy and after consultation with our German doctor we also have the appropriate antibiotic (one in six) on board, so we decide not to visit a hospital or doctor. So far, the wounds heal very well and it seems as if I had once again was quite lucky.

With my legs tied, I board the speed canoe with 2 x 120 hp the next morning with Karin. It brings us down the Rio Napo to the landing stage of the Sacha Lodge in just over two hours. From there we hike for 20 minutes, then change to small paddle canoes that take us along small, overgrown and beautiful canals and then over a large lake to the actual lodge. Already the journey is a dream and we see many birds and caimans. As soon as we had lunch and moved into our room, the tightly-timed program starts. In order to see the maximum with canoe rides, hikes, lookouts up to 100 m height, 300 m long suspension bridges and other excursions, we wake up at 5.00 h in the morning and often we also do night excursions after dinner. At night the jungle is most active and all the creepy-crawlies, tarantulas and snakes are easier to spot. On one of the excursions we fish piranhas. The little beasts eat very fast and the meat on the hook is gone in no time. We also visit a local, authentic community on the banks of a long tributary of the Rio Napo, where the women of the community tell us about their lives, prepare food and provide other interesting information. The grilled beetle maggot that I ate were not that bad. We also tried out the typical Quechua hunting wind tube.

Together with two Dutch couples and our two guides Oscar and Louis, we are a small group and get a lot to see. It is always fascinating what animals the guides recognize with the naked eye …. Without them, we probably would not have seen much, with the exception of a few monkeys and birds. It’s not like there is an animal or a bird sitting in every corner of the jungle. They are hiding well in front of us. We even see a sloth and an otter. Only the famous and resident Anaconda snake does not want to show up.

After four intense and beautiful days we have to leave, but we are looking forward to our home – Shujaa. We find it safe in Coca on the fenced parking lot, guarded by three fighting dogs (which, according to my previous dog ​​experience, have to be chained upon our arrival). Along the Colombian border, where there are still several splinter groups of the FARC of which we notice nothing, we leave the Amazon with 98% humidity and enjoy again the drier air in the highlands.

In the evening we spend the night at the waterfall San Raphael, with 150 meters the highest waterfall in Ecuador. We hear a dull rumble and hiss, similar to a thunder, but different. Karin leaves worried and talks to the park ranger at the waterfall. It is the very active, but mostly hidden in clouds volcano Reventador, who rushes there and spits out lava from time to time. But there is nothing to worry about and the park ranger only laughs at Karin’s thoughtful face and says “todos normal”. We see nothing except clouds and trust the locals, who live here for a long time with the noises.