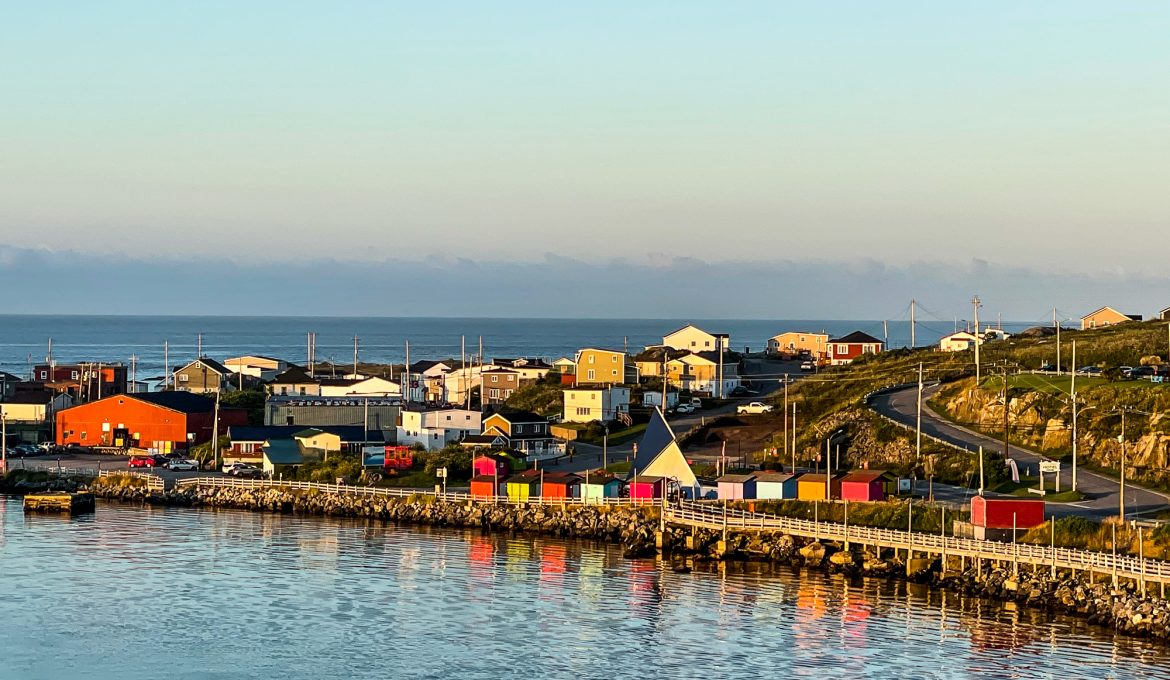 The summer in Mallorca has been the hottest on record ever and we have been looking forward to cooler temperatures in north-east Canada… but as often in life, things are different than expected and we are surprised to find daily temperatures of up to 30 degrees during the day. The start to the next stage of our world trip comes along without major changes 😉.

But first things first: nowhere on our previous trip around the world was the shipping of Shujaa as easy and uncomplicated as to Halifax/Canada. In 1.5 hours we received the shipping papers from our agent, completed the customs formalities and got Shujaa out of the port intact and super clean (he was washed again in the port of Hamburg without being asked). We are glad that we were able to rebook on an earlier ship on the day of drop-off in Hamburg, so that Shujaa arrived at the destination in Halifax well ahead of us for the first time on our world tour. The subsequent grocery shopping at Walmart and the visit to the nice, but overall rather unspectacular Halifax only takes a little longer, but already gives us a first impression for the very high price level in Canada.

Soon we are on our way on the so-called “Lighthouse Trail” in the southwest of the province of Nova Scotia and can listen to the sonorous, deep hum of Shujaa’s 12.5 liter engine. The weather is warm, there are still a number of Canadian tourists on the move and, in addition to numerous lighthouses, there are many cute little villages with colorful wooden houses so typical of north-east Canada – and incredibly large, perfectly mowed lawns in front of them. The coastline is varied: sometimes rocky, jagged, sometimes wide sandy beaches, sometimes branched out like a fjord or marked by the world’s strongest tidal range of up to 16 meters at the Bay of Fundy. All very nice, but so far without the big wow factor. Except that we meet one of our “fans”, Aaron, who contacted us already back in 2016 via our website and invited us to Nova Scotia back then. So, one of our very first followers. This is the first time we are enjoying the incredible hospitality of Canadians.

The well-known and highly acclaimed Cabot Trail in north-eastern Nova Scotia does not fully meet our expectations but the ferry to Newfoundland leaves nearby… and that’s where we want to go next to explore the lonely and wild part of Canada. Newfoundland promises passing icebergs, moose and black bears, wild rocky coasts, windblown moors and high plateaus as well as an extremely sparse population. Let’s see what we come across…

After a seven-hour crossing with the night ferry (unfortunately no more sleeping cabins could be booked) we arrive in the south-west of the island of Newfoundland, in the small settlement of Port-Au-Basques. In the next nearly three weeks we drive almost 3,000 km and see neither moose, nor black bears, nor passing icebergs (these can only be seen in spring and early summer), but we are still very impressed. To our great surprise, the weather is still midsummer warm, so that we even go swimming in a sheltered bay in the 20 degree warm water. There we also get to know Joe, the next Canadian who completely overwhelms us with his kindness and hospitality and we almost feel like we are back in Iran… he brings us home-smoked ham, eggs from his chickens and home-made jam.

In Gros Morne N.P. we take a spectacular boat trip into a deep-cut fjord lake, conquer the highest mountain in Newfoundland (at 820 meters, not that extremely high but you start at sea level and climb up a steep stone slope for a long time) and hike along the great coast.

In the area around Twillingate we explore a wide world of islands (most of which are connected by dams) and explore Fogo Island, a very pristine island where we would like to spend a few months after having finished our trip around the world (and as such being in a “league” with Cape Town, Rio and Kashan/Iran) and spend a nice time with Tini and Peter from Germany, who are also on the road in Newfoundland with their MAN three-axle truck. The passing Canadians, who are always really excited about Shujaa alone, are amazed when they see two of these vehicles standing high above the cliffs.

When we drive to the Bonavista and the Avalon Peninsula and explore enchanting lighthouses along spectacular coastal landscapes, the summer temperatures end and it slowly gets cooler. We enjoy great, lonely overnight pitches on the coast and at lighthouses – and we are lucky that fog only comes up once and that no foghorn disturbs our peace. At Cape Spear we are at the easternmost point of the North American continent and look eastwards towards Europe: Dublin is much closer than Vancouver and we again become aware that Canada is the second largest country in the world w/r to surface.

Without a doubt, Newfoundland exceeded our expectations because it corresponds to our idea of ​​lonely and rugged Canada far more than the nice, but very civilized and more densely populated Nova Scotia. From the southeast part of the island we take the 17 hour night ferry back to Nova Scotia. We happened to check our emails the night before and found that the ferry departure had been pushed forward three hours…due to bad weather and an approaching hurricane that was sweeping up the entire east coast from Florida to Newfoundland. The ferry then leaves even another hour earlier than rescheduled… whoever comes too punctually to the harbor has had bad luck… and all the next crossings to Newfoundland have been cancelled. At night on the vessel we have waves up to 10 meters high, but we can still sleep quite well in our cabin. What an end to our stay in Newfundland and we are excited to see what the other Atlantic provinces of Canada (Prince Edward Island, New Brunswick and Quebec) have to offer.