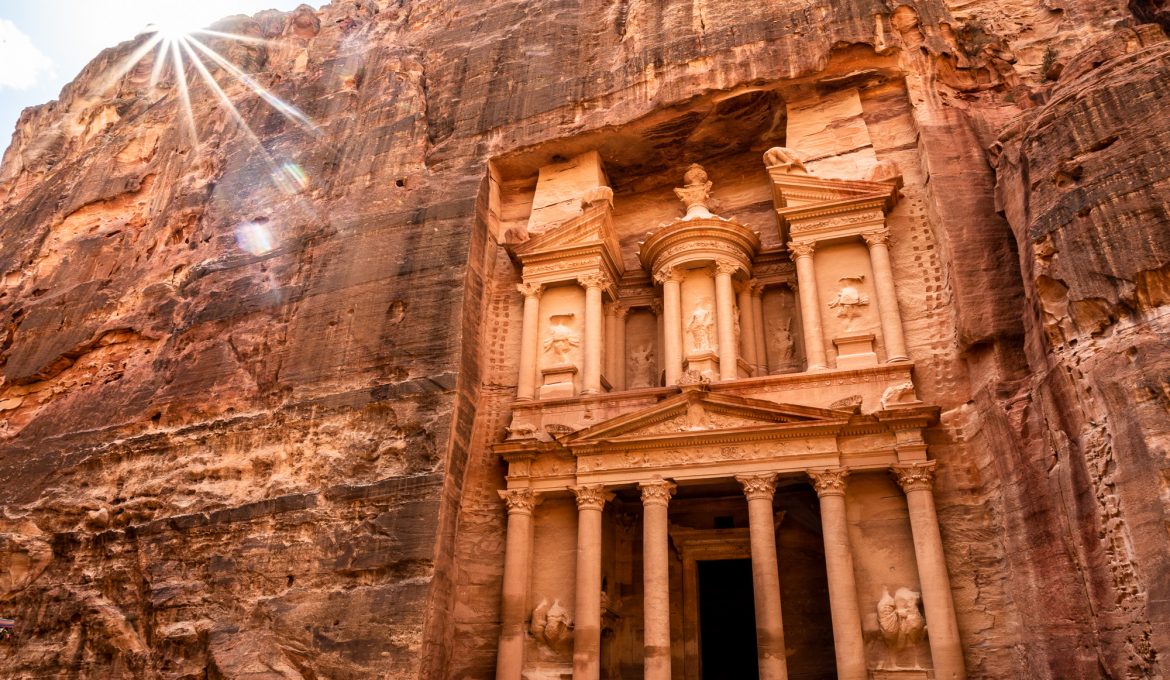 Comparable in size to Austria, Jordan is small – especially when you come from a country as huge as Saudi Arabia. We first have to get used to the new distances and the scale of the map.

The Wadi Rum is a real highlight even for us “desert spoiled” travelers – especially now that we are almost the only visitors due to corona. Great for off-roading in the deep sand with spectacular rock formations and canyons in between. A detour to Aqaba on the Red Sea lets us soak up some really warm temperatures one last time and enjoy the impressive scenery in the country quadrangle of Jordan, Saudi, Egypt and Israel.

Of course, we have already read and heard a lot about Petra and our expectations are high. Again, we benefit from the very few visitors and great weather. We are surprised of the dimensions of the facility… We hike through it for a good half day at quite high speed and still have not seen every corner. In the evening – we have just arrived back at our pitch for the night – a strong wind comes up and it starts snowing. What a luck again!

Jordan offers a lot of culture. Crusader castles, monasteries, churches and ancient sites of all kinds from different epochs and religions in a very small area: Egyptians, Nabataeans, Romans, Byzantines, Ottomans etc. – they were all here. We have to be careful not to get the “stone overload” again that we have already experienced in Peru. We get some distraction with a relaxing swim in the Dead Sea in a nice hotel resort, where we stay as day guests. What amongst the various sites really surprised us was the ancient Roman city of Jerash – its size is extremely impressive and compared to the visited Roman sites in Greece and Turkey it is in an extremely good state.

As we continue our journey, we have the second accident on this trip: a mini-bus drives off the hard shoulder and crashes into us. As always, next to nothing happened with Shujaa – the driver’s side of the mini bus, however, doesn’t look good. The policeman is less professional than the one in Iran during our last accident. Despite very clear documentation using our dash cam, he interprets the question of guilt quite freely and against us. But the equivalent of € 60 “settlement fee” for a pragmatic agreement doesn’t bother us as much as the fact that during all the discussions and waiting we realize that the mounting box for our MAN starter batteries at the rear is completely torn off on one side and on the other side it is only hanging on a scrap of steel. Luckily, Shujaa still starts (i.e. batteries and battery cables are not damaged) and a helpful car mechanic is also on hand, with whom I use our two jacks and tension belts to come up with a temporary solution in order to be able to continue driving. It’s unbelievable what can get broken over time when you do a lot of off-road driving – and this definitely has nothing to do with the accident. This time the accident was even good for something: without it, we would not have noticed this damage until the whole bracket box and batteries would have fallen onto the street with much greater consequential damage. MAN in Amman repairs the bracket box in just under a day at a quality level that is at least comparable to Germany.

The weather is getting bad and cold: we have some snow and extreme rain. So, we head east into the desert areas of the country…according to the logic: “where there is desert there is no rain or snow”. The desert castles in that area are impressive: They are not castles in the true sense of the word, neither in terms of size nor in terms of splendor, but rather castle ruins. The stone desert here is not really spectacular either, but each of the castles we visit has its very own aura: great frescoes, fine mosaics, fascinating basalt stones with imposing stone doors, exposed hilltop location not far from the Syrian border etc..

However, we also drive past the largest refugee camps in the entire Near and Middle East: dimensions that we cannot imagine – everything sealed off like a prison. Nevertheless, one has to pay a lot of respect to Jordan: 60% of the population are Palestinians (and thus also refugees from the two Israeli wars), another 10% are refugees from the recent conflicts in Iraq and Syria. And we in Europe are discussing small-scale distribution quotas….

So, we leave Jordan with a lot of respect for this small country, which despite the extreme challenges and ethnic diversity has always managed to be a guarantor of stability in this really difficult region. We are curious if we will be able to enter Israel by land… since no tourist has done so for over two years, there is no reliable information available.