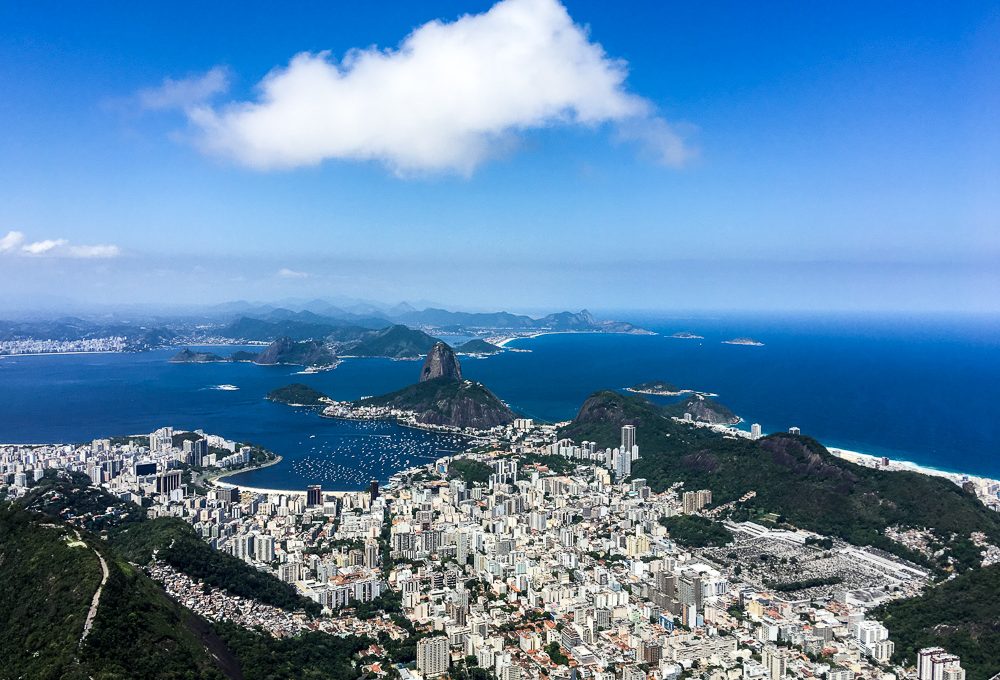 The cities of Rio de Janeiro and São Paulo are considered very dangerous. Since we have met Brazil – contrary to all the warnings that we have indeed taken seriously – as a very peaceful country with incredibly nice inhabitants (together with the Colombians ranking in first place in South America), we decided to meet the challenges of these cities.

Rio is the magnet of choice of many visitors and in São Paulo we have an invitation from Brazilians living there, whom we have met in the north-east of the country – a good opportunity to experience the economic metropolis of South America with 22 million inhabitants “off the beaten path”.

From over 5 weeks beach vacation well recovered and tanned we drive to Rio directly to our overnight parking location. At the base station of the gondola onto the Sugar Loaf there are numerous military installations, so that this area is guarded 24 hours around the clock, so ideal for us and also still very centrally located. Thanks to the perfect and also for Shujaa’s dimensions more than generous roads (it was heavily invested in infrastructure due to football World Cup and Olympics) we make it there quite easily. But unfortunately, we experience a great disillusionment: the parking is completely full. We are referred to a bus lane on which the big tourist busses park during the day: they do not want to have us there at first, but – as we have already seen several times in Brazil – a theatrical “not” suddenly becomes a “yes”. Without us understanding the reasons. So Shujaa is taken care of at least until the evening, while we visit the Christ statue with spectacular views of the city and beaches and do a first visit to the noble districts of Ipanema and Leblon and the adjacent Copacabana.

In the evening, the originally checked out parking lot emptied noticeably, so that we find a good spot for the night there. However, we have to leave the next morning again …. because the military needs the parking lot itself or because we might look a bit scary …. You never know what suddenly comes out of our slide-out roof. Therefore, we commute the next two days the 300 meters between military parking for the night and bus parking for the day ….

The Sugar Loaf as well as the fantastic location and relaxed atmosphere in Rio are very inspiring. Where in the world does one have a big city with 7 million inhabitants with such great, tropical beaches and a chilled atmosphere? Karin is totally excited about the versatility. On the last day we do a guided tour through two favelas and see not only the “other side” of the city, but also get lots of interesting background information.

With some disappointment we leave this truly unique city and drive along the Costa Verde south: Parati, a small colonial town on a sheltered bay with a charming atmosphere is a great stopover before going into the “cities of the cities”: For a long time we are wondering if we want to accept the invitation of our acquaintances to São Paulo: we were worried about the traffic chaos and the criminality, but decided in the end simply because we are too curious.

Our acquaintances have secured us a safe parking space in a closed and guarded residential area of ​​a friend, which we reach without any procedure and without a mega-jam well: the security there initially makes a few problems, but once again we realize that the Brazilians only like to discuss and make problems and then later everything dissolves in favor.

The city still surpasses our expectations of juggernaut and ugliness: no structure on which one can orient oneself like mountains, rivers or similar (and thus a complete contrast to Rio which with its many bays and mountains sometimes seems to be almost a small-town) and shabby skyscrapers where the eye reaches. For the first time, we also see a lot of homeless people in the middle of the street and drug dealers who sell crack right in front of us – even in “good” residential areas. The sightseeing highlights are manageable and not very spectacular, the only exception is the central market where you can buy great and fresh food of excellent quality. Never before in South America have we seen such a wide selection of international products, and you can clearly see the large number of European immigrants who arrived here at the beginning of the last century.

For that, in our evening meetings with our friends Nathalia and Lucas and their friends, we learn a lot about the country and its people. In particular, the imminent run-off election in two days, where the “Trump of the Tropics” is expected to win, is the dominant theme, causing much concern among our friends, as well as considerations to shift the future center of life away from Brazil. Violent riots are also expected after the announcement of the election results, so we are happy to leave São Paulo the next day. What a city, but we have gained deep insights into the country, which does not just consist of dream beaches and the Transamazonica. And we have – contrary to all warnings – again not been robbed!