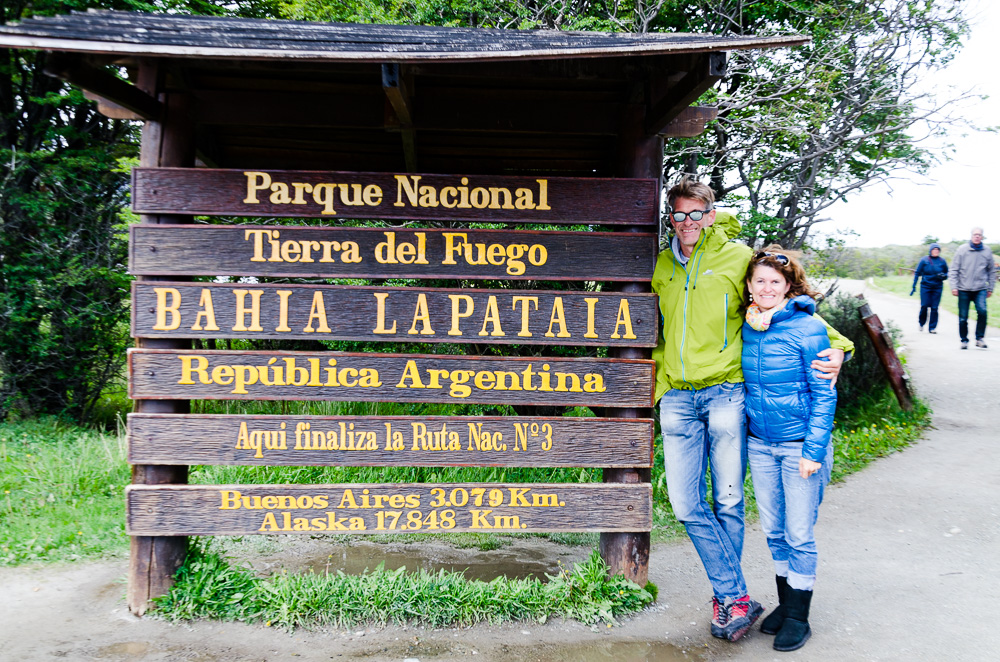 One thing we can already say for sure – after nearly 2 months of our trip around the world we have reached a first small milestone: the southernmost point of our entire world trip. Our hope to book a last-minute expedition ship cruise to the Antarctic in Ushuaia, the southernmost city in the world, did not materialize, because there were no interesting offers available. Therefore, from now on, for the next two years we are probably only going to the north, and thus, gradually, to warmer climates.

Tierra del Fuego resembles the grassy steppe of Patagonia in many areas, only in the south are mountains, lakes, glaciers making it very interesting and unique. The tree line is only at about 600 meters above see level and despite very summery temperatures (around 15 ° C) there is still a lot of snow on the mountains. We make various hiking trips with great views to the Beagle Channel and partly to the Cape Horn and therefore try to avoid the numerous tourists in the National Park Tierra del Fuego – these are sometimes travelling in large buses which of course not what we like to experience. Again, as on the Perito Moreno Glacier before, we had some problems with Shujaa getting into the National Park. First, they told us that the streets were supposedly too small for us, then 3-axle trucks supposedly are not allowed to drive there…. Always new arguments are being put forward. It seems that park authorities want to restrict individual traffic in favor of the great demand for mass tourism, the future will show whether this is a proper priority setting. Finally, we were able to convince the ranger to let us in with reference to our driving skills and where we already have travelled before.

In Ushuaia we experienced a great place to eat: the Küar. Karin had given me a self-made book with very good restaurants in South America last Christmas, combined with an invitation to one restaurant visit per country. And here we had a first redemption.

A visit to the Estancia Haberton, picturesquely located on the Beagle Channel and built almost 150 years ago by an Englishman, rounded off our seven-day stay on Tierra del Fuego. We would not have imagined Tierra del Fuego, which is about 1,000 km from the Antarctic, to be so lovely and mild – but we were also lucky with the weather.

Now we have travelled more than 10,000 km in 7 weeks. More km and less time than originally planned – but what is a plan. Although that sounds good, we take the time for everything that matters to us, stop and enjoy the scenery and the area. We are curious how this evolves. We heard from other world travelers that over time the travelling speed will slow down continuously. We will see.