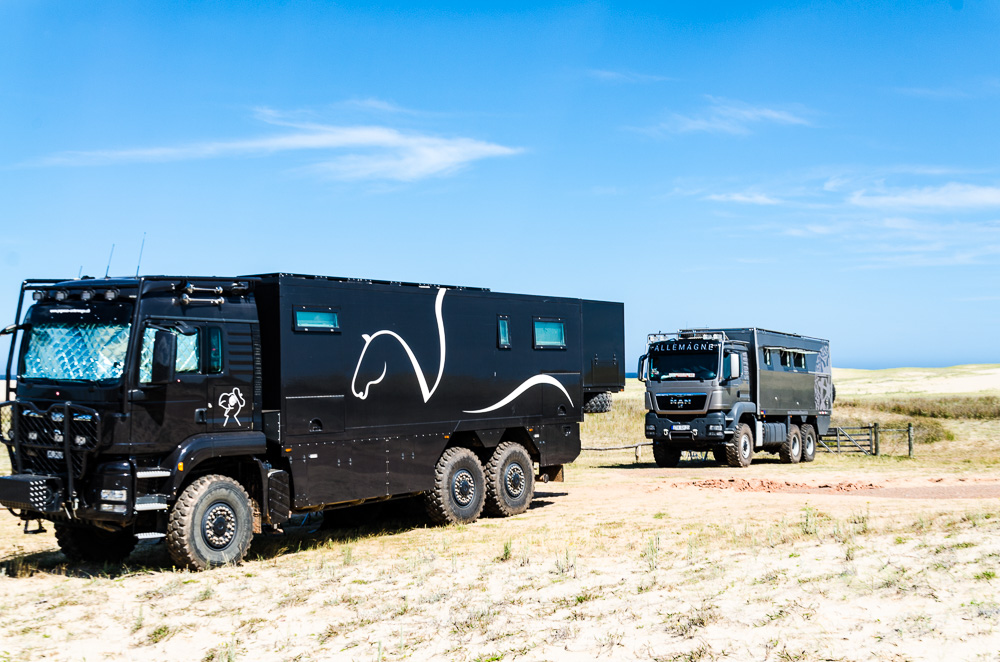 After visiting the Argentine side of the Iguaçu Falls, we drive through the northernmost province of Argentina – Missiones. Once again, the vegetation changes abruptly. In Missiones we find dense coniferous forests with a lot of wood processing industry, partly it looks like in Germany. After visiting the large and still well-preserved ruins of the Jesuit reduction “San Ignacio” (in the border triangle Brazil / Argentina / Paraguay there are over 30 such reductions) we continue on dirt tracks to the National Park Iberá. There it is again very humid and swampy. Iberá is, after the recently visited Pantanal in Brazil, the second largest swamp area in South America and again we see many birds, caimans and capybaras. The park is – contrary to the Pantanal – very little touristy and we have again a beautiful overnight space directly on a lagoon.

We book for Shujaa the return transport from Montevideo / Uruguay to Hamburg for the end of November: Not only is the further timeline and itinerary more or less fixed now, but we also have great melancholy leaving South America behind us (Link). Karin would like to visit the numerous top highlights again, but the world is so big and we look forward to Africa, our next continent to be traveled.

Uruguay is a small country without spectacular highlights compared to the other South American countries. And we still have 2.5 weeks left until our planned shipment … a completely new situation for us. For the first time since we have started traveling 13 months ago, we no longer have a specific destination and a concrete route in mind.

We stop in Colonia de Sacramento, the oldest city in Uruguay, with nice restaurants and colonial charm and then drive up the Atlantic coast past Montevideo north to the Brazilian border: Punta de l’Este (the Monte Carlo of South America) and many other smaller villages are still in “off-season mode” although we mostly have very nice weather with temperatures of up to 30°C. We are happy and spend several days in beautiful and remote locations like Punta de Diabolo and Laguna Rocha.

On one of our quad tours, we see a young seal lying completely exhausted on the beach. Around his neck a large, white plastic bag has been wrapped which greatly restricts his movements. We approach him and try to free him from the plastic bag …. He hisses on us and pulls back towards the water. We change our strategy on our way back with Shujoo, because he is back on land: I approach him from the water and distract him, Karin stalks him from behind robbing on her knees. But when Karin just wants to rip the plastic bag off from him, he turns around very quickly and hisses loudly. When he returns to the sea, I manage to step on a part of the plastic bag with my foot and tear it down – there is only a small “plastic collar” left and the seal now seems to be able to move more freely in the waves. Nevertheless, we have big doubts if he will survive without a mother. This incident touches us a lot: it is unbelievable how much plastic is in the sea and how the animals suffer from it. You read and see a lot about that subject of course, but if you experience it yourself, it is even more intense.

During the thirteen months we were traveling in South America we have met few Overlanders and even fewer truck-based expedition mobiles – only three in total. This should change completely during our last days in Uruguay. The Swiss couple Gabi and Peter with their three-axle “Globi” (project “Pegasus”), which we have visited twice at their homebase in Switzerland, have now shipped their truck to Montevideo after a 3-year journey through Africa. A few days later we meet them at a great place at the Laguna Rocha, and of course have a lot to talk about and spend a great time together. “Globi” is almost 3 meters longer than Shujaa, who looks almost tiny in direct comparison. Later comes Dieter from Germany/Uruguay with his Colombian girlfriend and his newly purchased Mercedes 3-axle to join us. Three three-axle expedition trucks at a remote place …. we would not have thought that this is possible.

After this nice get together we spend the last days for ourselves and clean Shujaa, Karin invites me for the last time in South America to a great dinner, we do some sightseeing in Montevideo and then we leave behind with very mixed feelings Shujaa in the port of Montevideo. Hopefully everything will work out well with the shipment and we can pick up our beloved home safely in Hamburg at the beginning of January. We had a really great time! An entire South America summary will follow soon.