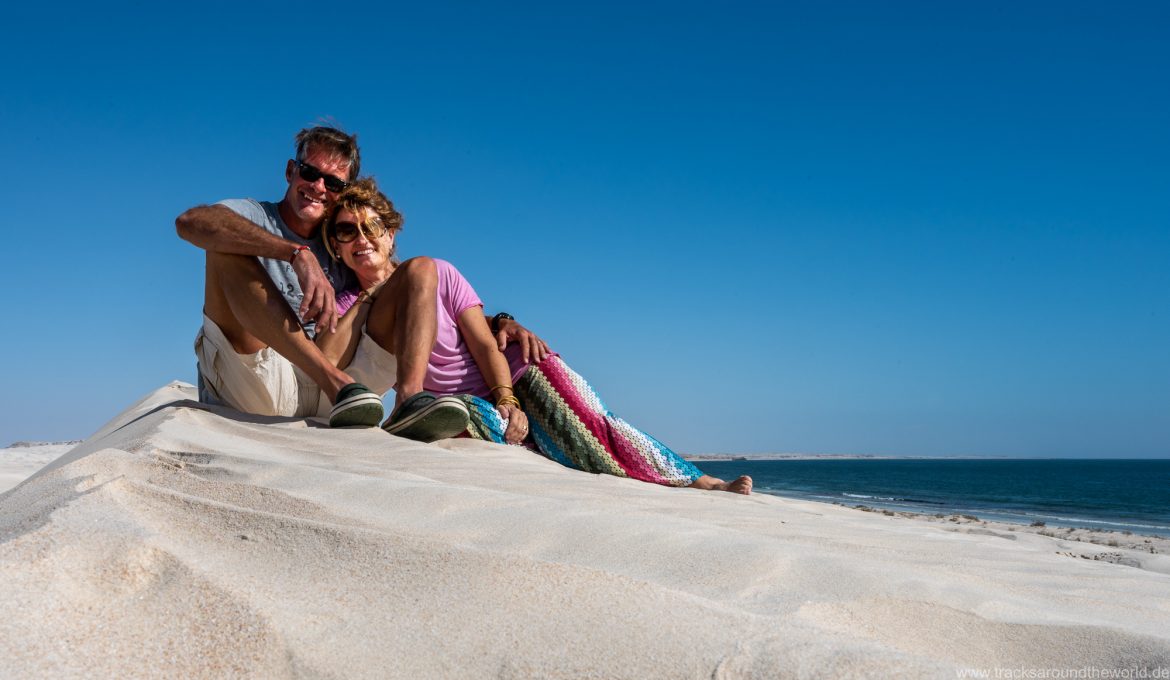 After we spent a lot of time in one region (the Hajar Mountains with their great wadis, mountains and forts) – we now have to make a long “stretch”: the coastal road is over 1,000 km long down to the southwest area of Salalah and the Yemeni border. There are a few nice highlights to visit along the way, e.g. the Ras al Shins Turtle Reserve. Here at night we can marvel at young sea turtles hatching from their eggs and on their dangerous path that follows to the sea, as well as egg-laying mother turtles. Or the sugar dunes, which with their gleaming white sand which creates a wonderful contrast to the increasingly Caribbean-looking sea as we get further south.

About 150 km before Salalah, the otherwise rather calm stretch of coast suddenly becomes spectacular: The Dhofar Mountains which is the center of the incense tree with heights of almost 2,000 meters drop steeply into the sea. The beaches become rocky and inaccessible, wadis repeatedly cut through the cliffs and the landscape becomes significantly greener. In the summer, this extremely south-westerly tip of Oman is touched by the monsoons and receives intense rainfall for three months. Banana trees grow next to palm trees, a lot of vegetables are grown, we even see baobab trees.

We spend over a week around the Salalah region, drive to the Yemeni border, let our soul dangle on lonely beaches and recover from the rather intense driving of the last few days. We are also paying MAN a short visit (for the first time on this journey): a screw fixing the starter batteries seems to have broken at some point, which meant that one of the two starter batteries could slip a little, which then led to the connecting power cable between the two starter batteries being ripped apart and Shujaa no longer having any starting power. And this in the middle of the desert…but after our experience in Africa we are used to bridging with our body batteries!

After quiet and absolutely wonderful days at the beach, we head inland towards the Rub al Khali desert, also called the “Empty Quarter”, because there is nothing here … except sand and dunes. This largest sandy desert in the world is primarily located in Saudi Arabia, but here in the three-country triangle Oman-Yemen-Saudi it also extends into Oman. The ruined city of Ubar located there – allegedly the lost “Atlantis” of Arabia – is not really impressive. Stones stop! Cruising over the challenging dune landscape, on the other hand, is one of the best desert off-road trips that we have experienced so far. We let the drone fly, enjoy the dreamlike landscape and concentrate on finding the optimal path through the dunes.

Suddenly out of nowhere, we hear a deafening noise, which we cannot assign at all. I think Shujaa’s engine explodes or something like that. However, a look at the instruments reveals nothing unusual. Then we realize the cause: a military jet that swooped towards us over the dunes, now flys a few meters above us and then takes off again and turns. We are shocked for a while and are wondering whether the jet discovered us by chance during a training flight or whether it was specially sent to us because of our drone flight or because of Shujaa being in a border area. Whatever the cause has been, our Oman adventure is drawing to a close and we set out on the 800 km long route north to the new border crossing to Saudi Arabia, which has opened just two weeks ago.