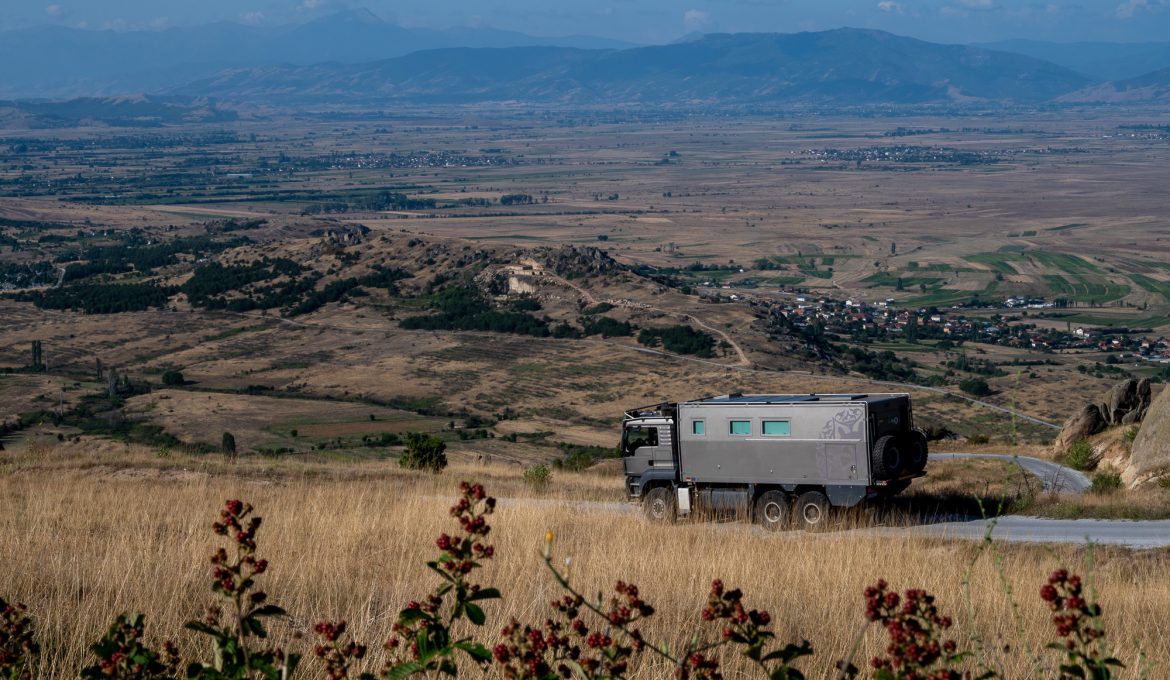 Finally, the wheels are rolling again: we really have been looking forward to the start again. The summer in Mallorca was fantastic … but that certain something was missing: the adventure, the exploration of the new locations etc.

After we picked up Shujaa in the port of Genoa from the shipping out of Mombasa, Shujaa first received a small wellness program from our cabin manufacturer and afterwards from MAN. Well serviced, we hope that he will take us safely and reliably through the next part of our world tour – after having in the meanwhile 175,000 kilometers on the clock from Europe, South America and Africa. This time we want to travel to Iran via Greece and Turkey, and from there to the Arabian Peninsula. Oman and Saudi Arabia, which was just recently opened for tourism, will be on the focus before returning to Europe via Jordan, Israel and the Mediterranean Sea. So much for the plan and we hope that Corona won’t put too many hurdles in our way. A good dose of optimism, coupled with a realistic assessment of the risk of “getting stuck somewhere”, is nowadays more important than ever before.

After we picked up Shujaa from our trusted MAN service partner, there are still a number of organizational things to do: Second corona vaccination, extending the snow chains (the existing snow chains, originally purchased for 395/85 tires, do not fit our 14×20 tires… contrary to other statements), installed our new refrigerator – now our third -, clear away numerous purchased equipment and utensils, etc. Together with a short visit to the “Adventure Southside” trade fair, five days pass before we can finally head south.

At the Turracher Höhe in the Austrian Alps we stop for two days and enjoy the coolness (the summer on Mallorca was very hot) and the fantastic mountain panorama on two long hikes.

We then drive quickly across the Balkans to North Macedonia, where we find a spectacular overnight place to stay at the great Treskavec monastery, similar to an eagle’s nest with a view of the barren surroundings. Now we feel at home! For the first time, compared to our previous world tour trips, we have started our tour directly from home and did not have a complex and sometimes unsafe shipping stage at the beginning of our travel destination. A great feeling!

Northern Greece can be reached quickly via the nearby border. The northern foothills of the Pindos Mountains are wooded and very lonely. At the Prespa Lakes in the triangle Greece / North Macedonia / Albania we visit the first Greek churches and monasteries, before we go to the remote Zagori villages in the Pindos Mountains. Embedded in the Vikos-Aos Nature Park there are 46 small mountain villages embedded in spectacular mountain landscapes. The unique character, shaped by the roofs of the stone houses covered with slate shingles, in combination with the typical, steep stone bridges give this area a very special ambience. The Vikos Gorge, at the exit of which we park Shujaa for two days directly on an ice-cold, rushing river, is the deepest gorge in the world over a length of 10 km and with a depth of 600-1,000 meters. With our Quad Shujoo we explore the furthest corners of this region for two days, go to delicious taverns for delicious meals and are enthusiastic about the spectacular scenery. To switch to our little curve speedster for the purpose of exploring has proven to be spot on … and it is just hell of fun to race along the lonely mountain slopes 😉.

The famous Meteora monasteries are of course not to be missed: 23 monasteries were built on sky-high, huge stone pillars and bizarre rock needles, six of which can still be visited today. Instead of using baskets and cable cars as in the past, you can now explore this “other world” relatively comfortably using stairs. One of the monasteries even served as a spectacular film set for James Bond. However, we are also amazed at how many tourists we suddenly see – many also from the Balkans. In contrast to our last travel stage through Eastern Africa, we are, not really surprising, no longer the only travelers due to the Corona.

We also notice this when visiting the Acheron Canyon. We hike through the gorge early in the morning just be ourselves: first on a narrow path along the banks, then through the ice-cold water into a deep gorge. Everywhere are bubbling springs from the riverbed or from the rock walls and the water is crystal clear. A great setting! After a good 30 minutes we have to turn back because the water is too deep for me….Karin would even need to swim! On the way back, crowds of people come towards us and the parking lot has become so full that we can only park out with difficulty.

Northern Greece: a great start to our third stage of the world tour!