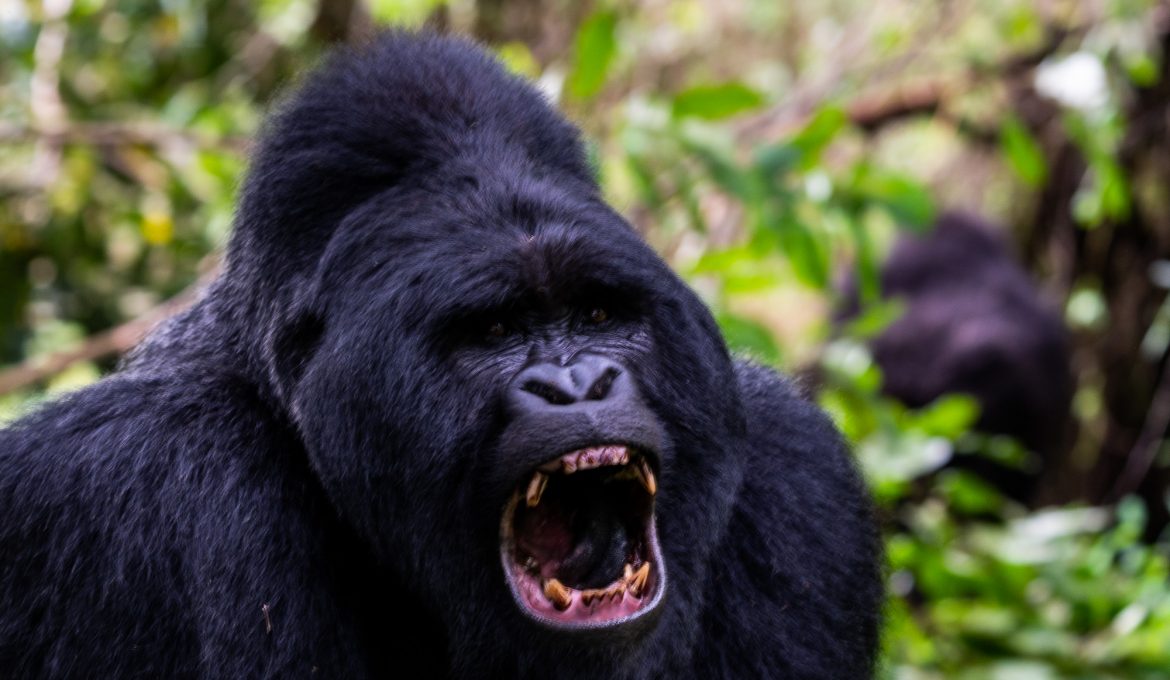 A long-desired dream comes true. Oliver received the Gorilla Tracking as a Christmas present the year before last. It was clear to both of us for a long time that we wanted to see these great apes in their natural habitat in East Africa.

It is good to hear that there are now again more than 1,000 mountain gorillas in the triangle of the Congo, Rwanda and Uganda. So, the population is growing because in the 80s there were only 250 Gorillas left.

In Kisoro, at the foot of the Virunga volcanoes in Uganda, we drive directly to the national park administration and are pleasantly surprised that the otherwise very steep fee of $ 700 p. P. has been reduced to $ 400 due to Corona and the lack of tourism. At our time of registration, we’re still the only ones for tomorrow’s tracking trip.

We drive to the base camp where we are picked up the next morning with seven other visitors. 10 people is the maximum allowed per gorilla visit. Together with two guides we hike up the mountain towards the jungle. After a short briefing, we continue our hike along cultivated fields, in order to shorten the arduous path directly through the impenetrable jungle as much as possible. Another five scouts are already out to search for the location of the gorilla family and to optimize the way for us. And after about an hour we get the call that they have been spotted. So, we dig deep into the jungle and actually climb uphill between bushes, lianas, grasses and painful, man-high nettles through the almost impenetrable green, in which no one has paved a way beforehand. Nature is beautiful. Clear, moist, cool, few insects. Exactly the opposite of what we know from other rainforests, for example in the Amazon. A sweet, warm, intensive smell and the waiting tracker group signal to us: we are with the monkeys!

And then I can already see the black bodies appearing between the leaves. We get closer and then I’m surprised how close we are allowed to stand next to the gorillas. Officially, 10 meters are allowed in Corona times, but in fact we are no further away than three meters. The participants in our group of nine people stand in a row and watch the family of eight gorillas. First two silverbacks, two youngsters, a mom with a baby and another female.

It is overwhelming to watch the animals play, do nothing, sleep or eat. They are so much like us. The hand that holds the foot, the look in their eyes, the completely relaxed resting position on the back, hugs … we could still learn something from laissez faire … they look so balanced and calm. Satisfied, almost perfectly happy. The look is very gentle, the brown eyes so deep.

Now and then the smaller silverback scolds the two adolescents who are constantly fighting, playing catch and scrambling up and down the bushes. They just have too much energy. The boss Mark just sits there all the time and does nothing or lies on his back and relaxes. The mom and her baby are in the background and it’s amazing that there is body contact with the four-month-old sweet baby all the time. Not once does the little one has no connection. Either it lies on mum’s stomach or between her arms or she grabs him by one leg and lets him dangle in the air.

At some point we see a mighty animal coming up the slope from the left. A third silverback and thus another son by Mark. We hadn’t noticed him at all and then suddenly he was almost in the middle of our group of people. We were all a little frightened and withdrew to a corner of the clearing.

With the appearance of the third male there gets some activity in the group. Mark’s two sons approach us in parallel. It feels a bit scary when two large 200 kg primates stand two meters in front of you, looking at you and slowly further reducing the distance. We go back further … I a little more … I’m looking for a corner in the bush … I’m just a bit scared… the two males lose interest for a short time until suddenly one of them is racing towards us, drumming wildly on his chest, to slow down before us just a meter away. Like in a bad horror movie … The guides are completely relaxed – I am not. I ask the guide why he is so relaxed. He thinks that this is not aggressiveness but just communication. I think he’s slightly crazy. I read later that this behavior is actually a kind of greeting. Strange greeting … Oliver is always in the front, he also sees it completely relaxed. It doesn’t take long and then the whole game starts all over again. And so they “drive” us back further and further. At some point we are a little further away from the group and one of the silverbacks is simply nibbling on a bush. Apparently, we were in the way of his favorite salad.

It’s just wonderful to watch these animals. The mixture between love, satisfaction and respect that we feel is something very special. The smoothness despite its size is amazing. It’s great to see the gorillas in a clearing instead of in the middle of the jungle which is normally the case. This is a great gift for us.

At some point they just walk away like they’ve had enough of us, which is probably also true. And we hike back into the valley: emotionally touched, with a broad smile on our face.