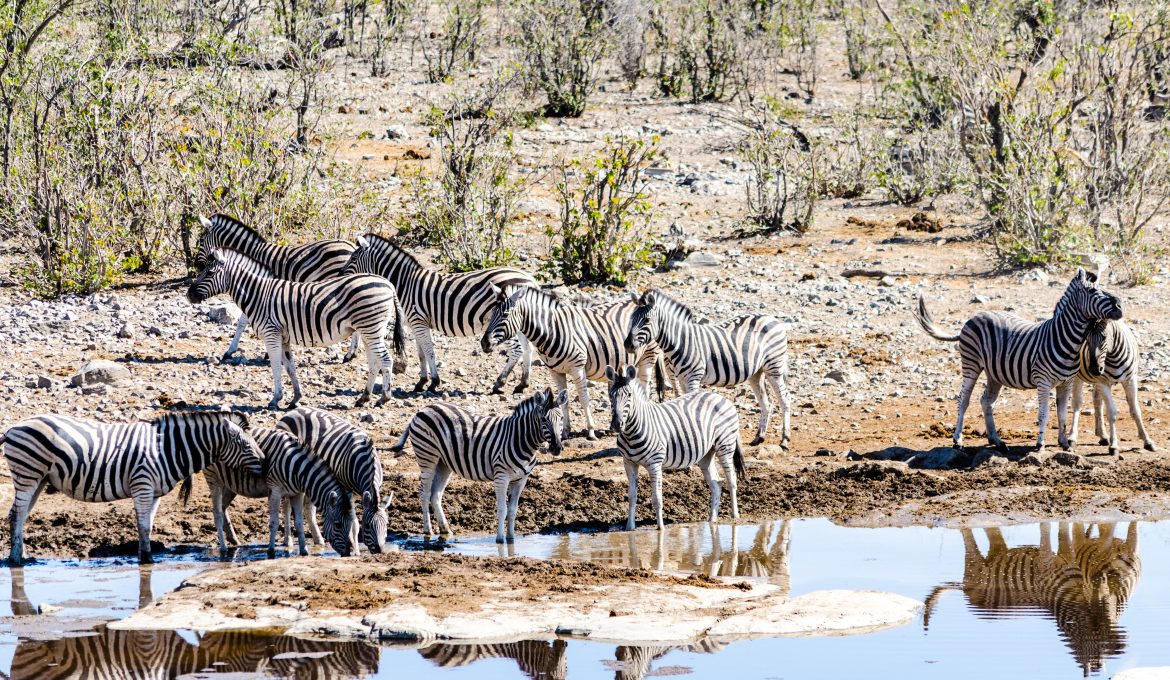 After having installed a new starter battery again in Kamanjab and thus having completely replaced the “battery pair” newly installed in Swapkopmund only 3 weeks ago, we are driving optimistically into the less touristy western part of the Etosha National Park. The workshop tells us that our batteries have a relatively rare demand in Namibia and therefore have been stocked probably for quite some period. Well, anyway, the current batteries have passed all performance tests successfully and also deliver the KPIs ​​that were given to us by our German MAN workshop for double check.

The slopes in the western part of Etosha are catastrophic …. extremely corrugated. One wonders, in fact, why not at least a small part of the quite significant parking and camping fees in Etosha are invested in road maintenance. After all, we’re not talking about the most remote areas for extreme adventurers like the Hartmanns valley or Marienfluss valley, where we were traveling a week ago, but about the main tourism magnet of this almost bankrupt state. Nevertheless, or just because of that the animal observations are all the more intense: we see lions (single and in a pack), elephants and also the first rhino on our current Africa trip. The anti-poaching rangers are in their jeep to “guard” it and are initially skeptical about Shujaa: a transporter for the especially in Asia still strong horn demand? At gram prices higher than gold prices, poaching is still a topic …. even in Etosha.

After we have just spotted a few lions at a water hole and want to start Shujaa again, the starter and the on-board computer shows that the voltage of the starter batteries has fallen sharply within only 10 minutes of standstill. Doing a self-start again with our cabin batteries and climbing under Shujaa to connect the cables is not really a great option under the attentive eyes of a few lions. At the second start attempt the battery with its last power just manages to start, but we are really frustrated that we still seem to have not solved the causal problem. Obviously, we cannot go on through the Etosha and stay at each waterhole with the engine running. At the southern Anderson Gate, we therefore drive out of the park and back to Kamanjab to the now well-known workshop. All tests show that once again a battery is flat (the one sent from Swapkopmund to Opuwo a week ago) and that the truck systems are running properly. We cannot really believe that we had that much bad luck in having gotten 3 “bad” batteries so far, but what shall we do? So again, we order a new battery, which arrives in the early morning of the following day – at least the logistics works well here.

We spend the evening with the nice German-Namibian workshop owners and learn a lot about the village life, the neighbor watch, the upcoming presidential visit and the hunting. Karin is very excited about the local food procurement without factory farming (i. e. game hunting) and the economic consumption of every single animal killed: you only kill as much as you really need for your consumption. On average, you kill an animal once per month.

After installation and all possible, positive performance tests the next morning, we drive again to Etosha – this time into the much busier eastern part of the park. Here we even see a leopard at a waterhole and many more elephants. With that we have seen all the Big Five animals here, except for the buffalos that do not exist in Etosha …. a rewarding trip.

One of the rather rare cheetahs we can experience on a farm with a nice overnight pitch near Grootfontein in a very authentic, nontouristic manner: There is a domesticated cheetah lady, who grew up in the house together with the dogs even in her childhood – Nandi. She can also be easily touched during feeding and her deep, sonorous purring sounds great. We are completely fascinated. It’s interesting how this big cat can get used to people. An option for our domicile in Mallorca after our world trip instead of a dog? We discuss whether it really does the cat and the owner a favor. Of course not.