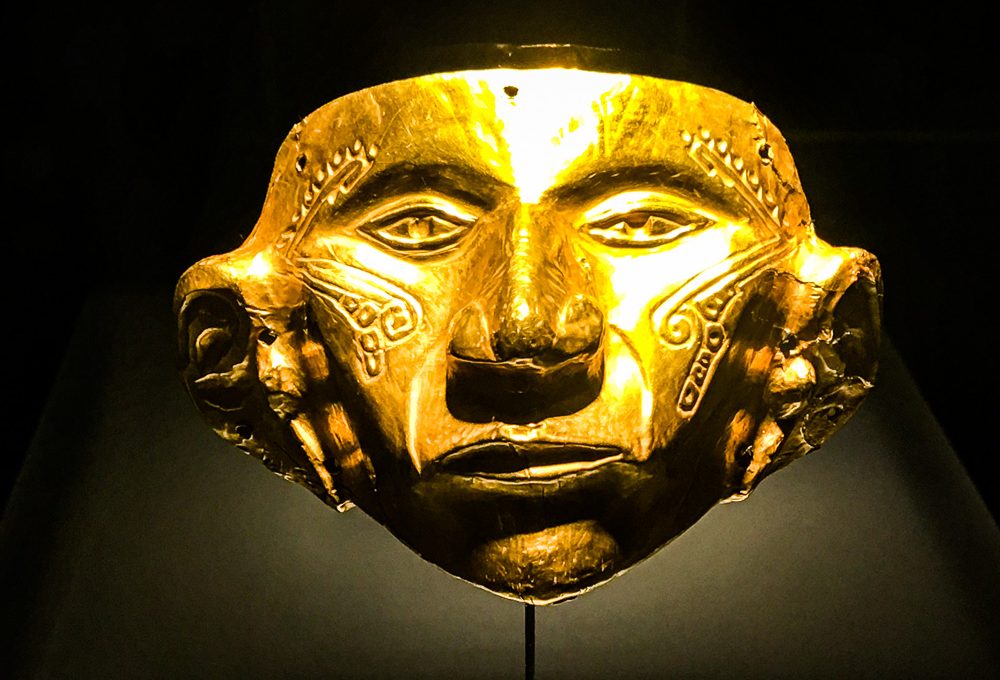 We have respect for Bogota: a moloch with over 10 million inhabitants and traffic jams around the clock, as well as extensive slums – that’s how we heard it from numerous sources. We park Shujaa therefore in the guarded parking lot of a shopping center on the outskirts, where there is also the final stop of the so-called “Transmillennium buses” – the only means of transport, which – thanks to its own lanes – allows a reasonably unhindered journey. Underground or S-Bahn or other public transport? None.

In the morning we take a Transmillennium bus in about 45 minutes to the city center and in fact: such a traffic jam we have never seen before. And the bus is packed, so we have to stand and a holding, thanks to other passengers as a stop, is not necessary. This is compensated by a visit to the legendary Gold Museum in Bogota: we do not usually look at every museum, but this museum has a reputation for being the most important museum in South America. The exhibits are beautiful and give an authentic impression of the gold treasures of the Indians. The colonial city center with the presidential palace is quite nice and the old town is almost a village. Only the view from Montserrat Monastery, over 3,000 meters high, brings to mind the huge dimensions of these 10 million metropolis. In the evening we are in the “hip northern part” of the city: around the noble Andino shopping center all high-end luxury brand stores have settled and there are many great restaurants and deli shops.

Once again Colombia surprises us: we have seen so much lifestyle and luxury last in Santiago de Chile and we have never expected it in Colombia. In the evening Karin invites me to dinner in the best restaurant of the city and Colombia …. another great experience. After all these impressions, we are glad to come back to Shujaa late at night and are completely exhausted. We are no longer used to big cities. The night in the parking lot of the shopping center is surprisingly quiet.

The next days we spend in the northern outskirts of Bogota: in Zipaquira in a former salt mine using 80 tons of explosives in the years 1992 to 1995 on 8,500 m2a mysterious, illuminated cave cathedral was built. The mood is impressive and very contemplative. Karin is totally touched by the mood in each cross station.

Then it’s off to Villa de Leyva, one of the oldest and best preserved colonial cities in Colombia. In addition to the site visit, we explore various beautifully located Augustinian and Dominican monasteries in the area, look at a terracotta house in Hundertwasser style and make a great hike on the “Paso de Angel” on a narrow ridge between two deep gorges. In addition, we visit a dinosaur fossil: it is hard to believe that there was a sea here at almost 3,000 meters above sea level some 100 million years ago, before the Andes emerged.

After stocking up on delicious cheese and sausage at a Swiss emigrant in Tunja, we head on to the Eastern Cordillera: in the charming, colonial mountain town of Mongui, it’s hard to believe that almost all of South America’s footballs are made. The Laguna de la Tota impresses with a brilliant white sandy beach and once again we and Shujaa are surrounded by curious and interested crowds, before we enjoy the setting at the lake alone at sunset. The gentle, lush green hills with the numerous lakes and the many cows remind us somehow of the Allgäu; Hard to believe that we are almost at the equator, but the altitude of about 3,000 meters and corresponding rainfall make it possible.

After a final visit to the fabled Laguna de Guatavita, we conclude the first part of our South American trip and head for our long-term parking space for the next month. On the safe ground of a weekend home of a Bogotan, whom we met by chance, we will leave Shujaa for the next month while traveling back to Germany. With a heavy heart, we decided to sell our house in Herrsching near Munich, as we see each other primarily in our rolling house Shujaa in the next few years. So the next few weeks we will clear out our house and make it ready to handover and then at the end of June we will continue our journey to North Colombia and from there again south to Ecuador and Peru and then east to Brazil via the Transamazonica. Stay tuned.