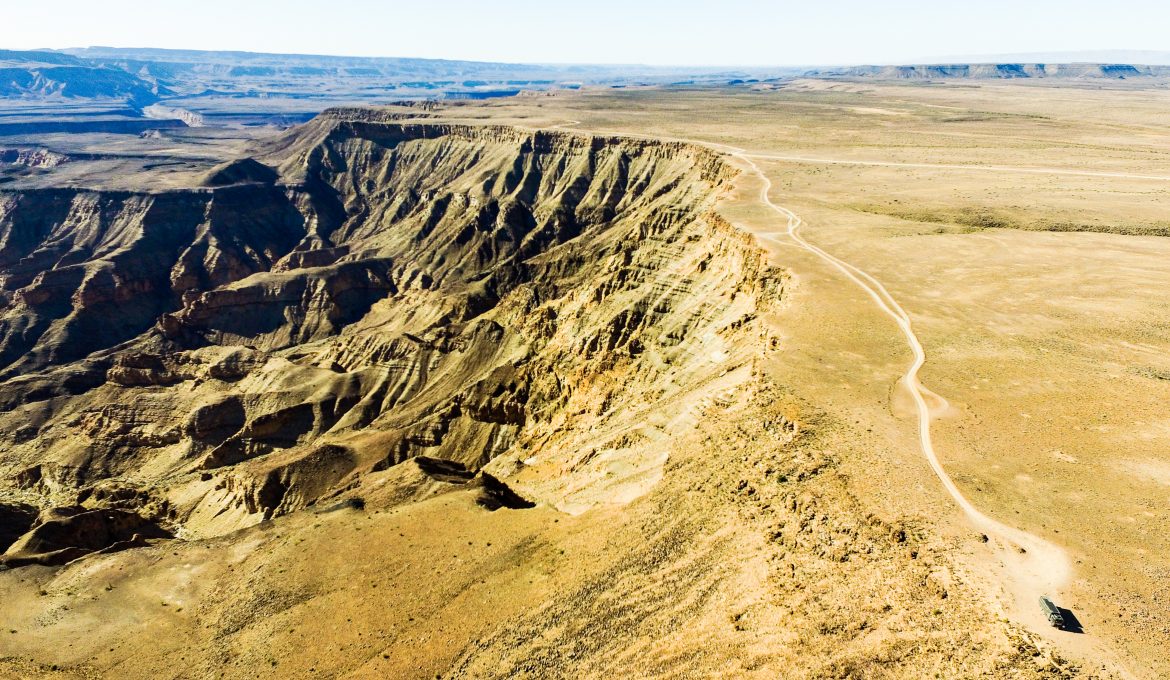 Over the remote Tiras mountains, we leave the Namib Desert and drive to Lüderitz on the Atlantic Ocean. The city has clearly left behind the best times during the diamond boom of the penultimate century, despite having the only port of Namibia besides Walvis Bay. Everything looks as if it was extinct and the colonial houses built in Wilhelminian style seem rather out of place in this environment. The nearby ghost town Keetmanskoop, completely deserted and eaten up by the sand, fits in much better into this scenery.

We move further south to the Orange River, the border with South Africa. Fascinating, still being in the middle of the desert and then suddenly coming to a narrow, green valley with dreamlike wild camping places and surrounded by rugged rocks. The hot springs of Ais-Ais and the Fish-River Canyon (after the Grand Canyon the second largest canyon in the world) are not far away. Again, we let our copter rise …. without crashing. The intention to use more of our copter in Africa more frequently than in South America has been accomplished so far.

What we did not know is that Namibia also has a wine road nowadays with four wineries distributed over the whole country over a distance of 1,800 km. At the first winery, Naute Christal, we only buy gin and fresh pomegranate juice. At the second winery, Neuras near the Naukluft mountains, we make a wine tasting including cheese platter. Of the three wines to be tasted, however, two come from other wineries in Namibia. There is a good reason that we have not heard much of Namibian wines yet.

A key reason for our trip to the south of Namibia is the Kgalagadi Transfrontier National Park, located in the border triangle between Namibia, Botswana and South Africa and being the first cross-border park in Africa. It is also known for his large population of black-maned Kgalagadi lions and we want to visit them. After all, Shujaa wears a lion in the logo (the MAN logo) and after my visit to the shaman in Cusco, I now know that I can also roar like a lion.

We see all kinds of animals and the park is also very scenic with its north-south running red sand dunes and the two Rivieren (dry river beds) of the Auob and Nossob. The search for the Kgalagadi Lion, however, turns out to be extremely difficult. For three days we do our morning and evening game drives, from Shujaa’s high seat (cab) having a great all-round view … but no lion can be seen. However, we experience one of the notorious Kalahari thunderstorms: the night becomes a day, it is not even possible to look only in the direction of the glistening, bright flashes, it dazzles. We think the world is going down and even forget to take pictures, the hail patters on Shujaa and the gusts of wind shake so vehemently on the vehicle that we think “that’s it”. We now understand why almost every third tree in Kgalagadi N.P. has been struck by lightning.

After this night, our expectation for our last game drive the next morning is very low: we know that animals come out of their hiding places very slowly after such a storm. But suddenly we see him: a Kgalagadi lion. Alone in the just rising sun …. As if nothing had happened the night before!

Satisfied to have seen at least one Kgalagadi lion, we head north again towards Namib-Naukluft N.P. In the Naukluft we make a great hike through the rough mountain landscape and see surprisingly many live and dead animals along the way. For a long time, we are puzzled who in the very lonely car park could have completely re-adjusted Shujaa’s curbside exterior mirrors at a height of almost 4 meters: curious other hikers? Unlikely. It could only have been the baboons. Karin later discovers “evidence” of the act: Dirty handprints on the cabin.

On the way Karin sees a man at a farm, who comes with a wheelbarrow from an adjacent field. And her raised position makes it easy to see what’s inside: parts of a zebra, on top of the severed head with its mouth open. Maybe a victim of a wildcat he has cleaned up?! Had certainly made a good photo subject, but in such moments, we are at first rather surprised than that we think of stopping.

At the Spreetshoogte Pass we find a dream pitch with a view of the deep underneath Namib Desert and the dunes of Soussousvlei, with a view into the setting evening sun. Here we are again aware of the whole expanse, fascination and silence of the Namib desert. Via the Namib and the beautiful granite cliffs of the Blutkoppe we return to civilization on the coast to Swakopmund. There we have our window panels installed (that got stolen during the shipment) so we do not have to open the doors to take pictures anymore. In addition, we buy new starter batteries: Surprisingly, Shujaa did not start anymore in the middle of the loneliness of the Namib Desert after a short stop – even though the batteries were only two years old! We were glad that we were able to jump-start Shujaa ourselves by using the batteries of our cabin.

After Shujaa has been completely cleaned inside and out again, we are approached by a diamond dealer from the Congo asking whether Shujaa is for sale: he needs exactly such a vehicle for his “business trips” into this completely underdeveloped area of Africa and he makes us an immoral offer which he wants to settle in hard currency, i.e. diamonds. We kindly decline the offer, in 5 to 7 years maybe. Shujaa in his third life as a diamond transporter – an interesting idea.