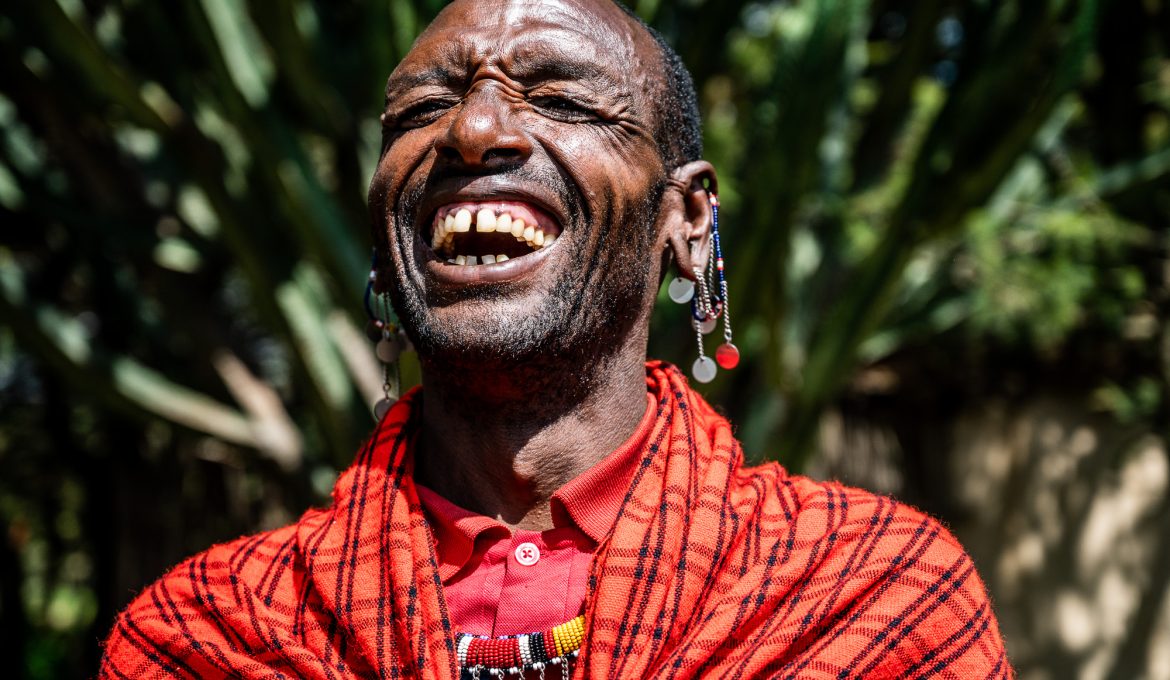 My friends know that I like the exotic. Therefore, at the beginning of our world travel plans, I was particularly excited about the various indigenous peoples – and especially the Maasai.

The Maasai are originally a nomadic tribe who are believed to have migrated from Sudan to the grassland of northern Tanzania and southern Kenya. They are mainly found in and around the East African Rift Valley. That means they live in and around the Serengeti, the Maasai Mara and the Amboseli National Park. So far, the proud and warlike tribe has been able to preserve their traditions quite well, but climate changes (little rain, little food for the animals), politics (preferring other tribes by subsidizing farming) and other adverse circumstances are now facing them with great challenges.

They live together in family groups as a clan. To do this, they are building a village that is surrounded by thorn bushes to protect against wild animals. In the kraal are the individual huts (bomas) that the women build from wood and cow dung. There are no windows to better protect against the heat. The house has a fireplace in the middle and beds around it, including a guest bed – in every hut, no matter how poor the owner is. Because the shepherds’ nomadic wanderings ensure that every “traveler” has a place to sleep with a friend from his age group. In the middle of the kraal there is a protective circle, into which the cattle are driven in the evening.

Children are assigned their duties early on. You see little boys every day, sometimes just five years old, driving large herds of goats and cattle across the grasslands. Between the ages of four and five, the children’s lower two incisors are pulled, and so are those that follow later. This is considered a symbol of beauty.

The Maasai are organized in age groups. Between 15-25 the boys are trained as warriors. This only happens every five to eight years. So, there are large groups of men, often over 100, who come together in a class and know each other across the clans, even in more distant areas.

The girls are circumcised between the ages of 12-16 and then married. Unfortunately, this old tradition still applies here, but fortunately it is increasingly being questioned. Women take care of the house building, cooking, water and wood procurement, and of course the children.

The cattle are the livelihood of the Maasai. Their wealth is measured by the number of cattle. They are rarely slaughtered and only on special occasions. Since their milk and blood are important foods, the cattle are milked and a small incision is made in the cow’s carotid artery, blood is drawn and then closed again. Milk and blood are mixed and drunk. The shepherds feed themselves when wandering through remote areas for weeks.

The god of the Massai, “Engai” has assigned all the cattle on earth to the Maasai, which is why violent raids against non-Maasais still take place from time to time, as they have derived their right to forcibly take cattle from other peoples.

In the course of our trip through Tanzania and Kenya, we have particularly extensive and intensive contact with these proud semi-nomadic people. We meet them again and again on the way, but many also come to our wild overnight places to introduce themselves and to satisfy their own curiosity.

We quickly notice a special characteristic. They are extremely respectful and withdrawn. Amongst each other, but also with us. While other African people often circumvent us without respecting any privacy, the Maasai stand around us respectfully because they are simply curious, but after a certain amount of time they leave again.

At one of our overnight spots in the Maji Moto Maasai Cultural Camp, we experience in a very authentic way how the Maasai live. Among other things, we were also present when older men bless their children and other younger people by the younger person tilting their head slightly to indicate this intention and briefly laying their hand on the forehead. We also meet an ancient man who occasionally goes to the spring to wash himself and who blesses me in this way. It is an incredible emotional feeling, because the man radiates wisdom. And promptly 30 minutes later two children arrive who also want to be blessed by me. Simply wonderful, this gesture. So, I always allow myself to be blessed by the elders who curiously come to our place to stay in continuous contact with us.

We go on a hike with two Maasai in the nearby mountains with a breathtaking view. During this time, we experience the Maasai very intensely. How they walk, what they say, what sounds they make to interact with one another. How they sit on the rock for a long time and look at the plains and you can literally feel how proud they are of their country and their life. At that moment I have the feeling that the Maasai are very similar to the Indians, which is later confirmed to me.

At another overnight place we get to know two shepherds who are “traveling”, that is drive their cattle from one fertile land to the next, and who only keep the cattle in circled thornbush places at night to protect them. Once I get to know the incredible willpower of the Maasai, because the shepherd is very reserved at first. When I take my photos, which is okay for him and show them to him, he grabs my upper arm so tightly and shows me with gestures that he wants to see all the photos in the camera. I almost get a little scared as the facial expression, gesture and presence are so overwhelming. I don’t hesitate and show them to him with pleasure. For me, that’s a very strong statement.

As a woman, I am of course absolutely delighted with the jewelry they wear, both men and women. Of course, the colored pearls contrast much nicer on the black skin than on mine and I stare at the people who adorn themselves so beautifully every time. The globules on the dilated earlobes on the shaved heads, the many rows of pearls on the neck, sometimes with the large, round pearl discs, but also the colorful, wide ribbons with pretty patterns decorated on both ankles and on the wrists and on the upper arms. But also, the decorative checked cloths with which they wrap themselves up and throw themselves over their shoulders again and again are beautiful and aesthetic to look at. Simply majestic.

And I’m fascinated how they treat each other. The interplay of strangeness, respect, pride and straightforwardness is a mysterious mixture for me that I really like. Of course, not all that glitters is gold and many of us will know the film “The White Maasai”. Therefore, I am not subject to any romantic illusions, but as a native people, with their rituals, their life and what you get to see, I still find them to be very authentic and beautiful to look at. “Ashe oleng” (Thank you very much) for the nice impressions.