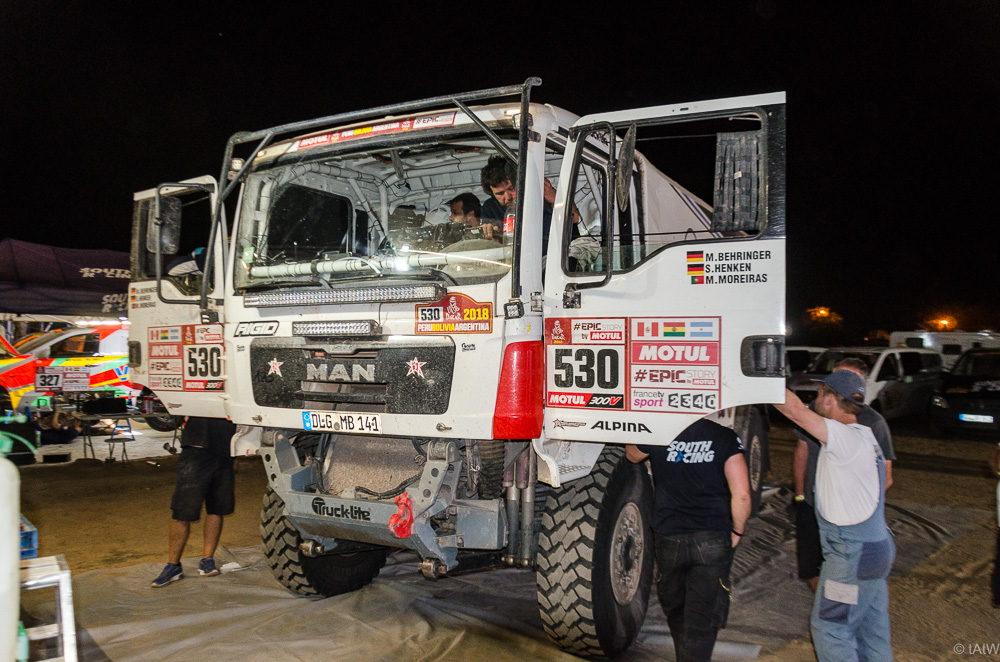 18It has always been my dream to be “in the middle” of the Dakar Rallye. We had roughly discussed this vague option on our farewell party, with our friends at MAN (the so-called “Echter brothers” who drive the service truck for the factory team there), but according to our travel planning at that time, we would still be too far south and besides, the exact Dakar route through South America for 2018 had not been released yet. At the beginning of this year, this rough idea began to become more concrete: according to our latest itinerary extrapolation, we would pass through exactly the route of the Dakar Rallye in northern Argentina at the level of Chilecito.

Although it is very difficult to get into the hermetically sealed bivouac – the place where all the racers and service teams meet at night – it soon became clear that Hans Echter (member of the MAN service team at the Dakar) could organize this for us on site …. And hence our anticipation increased day by day: Will Hans and his team get into the bivouac on time? Do we even find ourselves together (because of the virtually non-existent internet / mobile connection in northern Argentina)? Are we even allowed to drive to the vicinity of the bivouac, due to security etc.?

Like in most situations then everything runs super smoothly: whilst we are looking for a parking space near the bivouac Hans approaches us already – he had seen us coming – and gives us our team inlet tapes: In the bivouac we directly receive a couple of well-cooled Bavarian wheat beers from the entire MAN service team and we start chatting. It’s only early afternoon and the race cars have not arrived in the bivouac, and the stage for the service vehicles was quite short today …. so everything is very relaxed and plenty of time to learn more about this toughest rallye on earth.

As it is already the 12th Dakar rallye for Hans and his colleagues are also old Dakar participants, they are well known by everyone and many people stop over. The technical Dakar inspector (who is responsible for compliance with vehicle and service rules) also comes by and everyone is interested in us, our world trip and, of course, our vehicle Shujaa. After half an hour, the technical inspector comes back and has organized an entry permit for Shujaa in the bivouac – we cannot believe it! We go out, mount the sticker on the windshield with the permission (which will probably stick to Shujaa for a long time as a souvenir) and then comes one of the most impressive moments for me in recent years: We drive slowly from behind to the crowds gathered around the bivouac entrance, everyone turns to us, we are photographed from all sides, the security beckons us through and we drive through the flagged entrance road into the bivouac. Then we place ourselves in the immediate vicinity of the MAN team. I am running cold on my back: we arrived with our baby Shujaa, our home, in the heart of the Dakar Rallye.

Although more and more race cars are coming to the bivouac, many people gather around Shujaa and we are certainly one of the most photographed vehicles of the day – Shujaa looks somehow different than the typical race trucks and service vehicles so we are catching attention. We’re having dinner with the entire MAN service team, are talking about the “good old days” when the rallye was still in Africa and hence making it a real challenge also for service teams to complete the daily stages, and now are waiting for the MAN Race team to arrive at the bivouac Mathias Behringer, the MAN factory team driver, has the reputation of being a “Robin Hood” of the Dakar, as he often stops on the road to help or even tow vehicles … . So it may take time and we still have a great time talking and looking around. I walk several times through the now flood-lighted and very busy bivouac and enjoy the great, unique atmosphere. At around 11:30 pm Mathias Behringer finally gets into the bivouac. The relaxed atmosphere in the service team quickly stops, since there is a lot to repair: when dipping into a dried stream bed, Mathias today has lost the bumper, a tire must be mended and something on the front axle is not right. Completely unpretentious Mathias joins us soon after arrival, we chat about the challenge of today’s track and with his navigator we discuss where the next day we can best observe the rallye on the track. The easiest thing seems to be to drive the next morning behind Mathias the 100 km to the starting point of the rallye and observe from there the “life” start.

Later, the team, who today enjoyed the help of Mathias today on the track, comes along and thanks him with a huge amount of beer cans and energy drinks. At 2:00 h at night – everywhere is still screwed and it is a hell of a noise – we go to bed. At 5:15 h in the morning we get up to drive behind Mathias, as agreed, to the starting point of the next stage.

Here, however, the problems begin: as a non-race truck we cannot drive out at the main exit of the bivouac as planned but must use the side entrance. When we finally fought our way, Mathias is already gone. We therefore follow two Kamasz Race Trucks: Kamasz has been leading the truck teams with its 4 trucks for many years due to a lot of sponsorship by the Russian state and European technology, e.g. MAN engines. What can go wrong if we follow the leading team through the dark of the night to the starting point? Again a very moving experience: in the dark the cell phones of the spectators from the street ditch flash everywhere, at intersections the police blocked everything so that we race behind the Kamasz in high-speed through the dark night.

Although the rating has not even started, it is already about speed: Shujaa gives everything …. I did not know we could be so fast. Our consumption is over 60 liters / 100 km and yet the Kamasz Race Trucks with twice as much power and half as much weight are of course faster than us. At some point in the plane, we catch up with one of the Kamasz again. Just weird, somehow the starting point had to be here already, but we continue with our high-concentration drive through the dawn with high-speed. When the Kamasz then stops at a gas station, something is definitely not right. We ask at the gas station and find out that we have already passed the starting point of today’s section some 40 km before. Since it is now too late for the return to the starting point, we position ourselves on the roadside in the immediate vicinity of the Peugeot service team on the track and have breakfast first.

After an hour, the first race cars pass by (Peugeot is again leading this year), which started even earlier than the trucks. We get fascinating service scenes on the track and right next to us the vehicles pass by with high speed. After just over 3 hours, our two MAN service trucks pass by and we drive to a meadow for a photo shooting. In addition to some food provisions (mustard gherkins and Bavarian sausages), we also get t-shirts as souvenirs. Although we were only together for 24 hours, it’s hard to say goodbye. We have already felt like an integral part of the team, and although I’m rarely sentimental, my feelings come up. The service teams continue south to the next bivouac, we are turning north and soon find a place to stay to recover from the formidable experiences of the past 24 hours.

In the next few days, I think a lot about the Dakar and increasingly a new goal in mind is building up. One day in my life, I want to race the Dakar with a race truck and ideally with my own service team. Of course, this is just a dream at first, but to stop working before the age of 50 and making a world trip with an expedition mobile has also started with a dream. Future will tell.