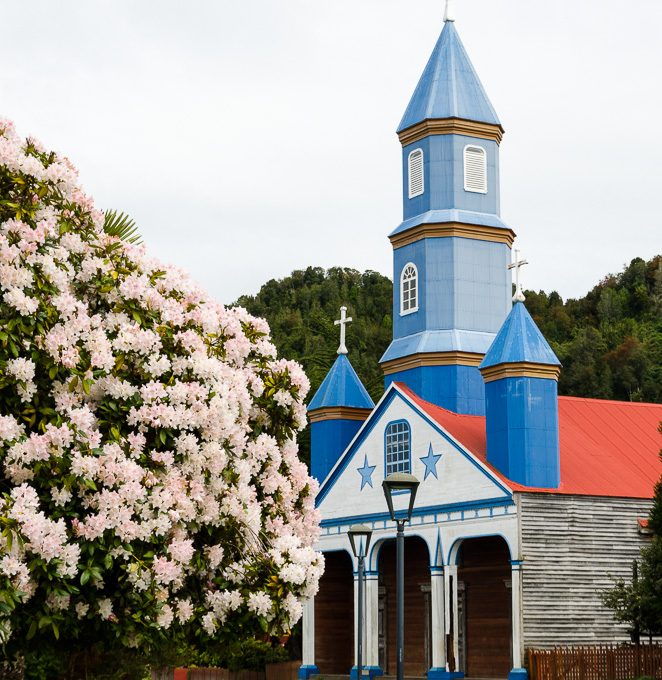 We take a ferry to the island of Chiloe, known for its wooden churches, stilt houses (palafitos) and shingle-clad buildings. This is where the Chilean south ended some 30 years ago, that used to be the end of civilization. The island is the second largest in South America after Tierra del Fuego and so we drive about 600 km: from wild Pacific beaches to lovely bays with landscapes that – if it is not raining – show magnificent flowering colorful in yellow and red. Everywhere the fishing dominates and we buy a lot of good and cheap fish. There is a very special atmosphere – the chilots (that’s what the inhabitants of Chiloe are called in contrast to the Chileans) love their independence.

We also take a 5-minute ferry to the neighboring island of Quinchao, which is even more romantic. Many hills, even greener – absolutely worth seeing.

Unfortunately, we notice in the evening that we have somehow lost part of our branch deflector – after all, a 5-meter-long aluminum tube. We ask ourselves where and how this could happen, but we did not have any larger branch touches here. An evaluation of our photos shows that this could only have happened within the last 24 hours (I had taken a photo of Shujaa on the ferry to Quinchao, when this part of the branch deflector was still there). So the next morning we drive off again the whole 200 km of the day before, the eyes hurt from looking at the wayside, we go to the police, to the local radio (where a corresponding announcement is made on the radio) …. Unfortunately without success. Frustrated and tired we drive to Quellon in the south of the island, where we take the ferry that operate only once a week at 3:00 in the morning back to the Chilean mainland to Chaiten and the Carretera Austral – another one of the 10 dream roads in the world that we will drive down further south.

In Quellon officially ends the Panamericana, which leads from Alaska over 12 countries to southern Chile. We will cross it several more times on our trip, but this former adventure track is nowadays often a highway-like freeway and therefore not the kind of track we prefer.