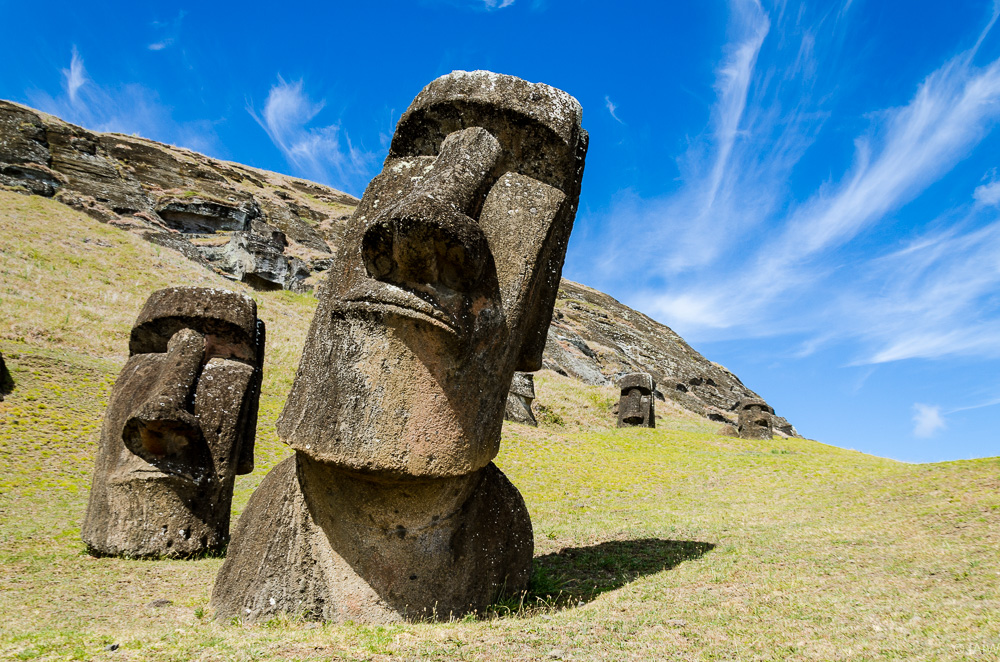 After parking Shujaa directly at Santiago Airport and sleeping there for one night for the early departure next morning, we head for the five-hour flight west. The Easter Island is the location furthest away from other human settlements on Earth. 3,000 km from other people, 4,000 km to the nearest airport. The Easter Island is known for its huge rock statues – the moais – and the mysticism, which was created around the background of the development but also to the decline of this ancestor cult. From the 18th century onwards, all the moais transported and erected on this little island were invariably knocked over for reasons that were not completely clarified so far, so that all the moais standing today had to be rebuilt in complex archaeological restoration work. The island has 1,000 statues, but just 40 are restored.

Already the arrival at the airport makes it clear – you are in another world: no terminal, no luggage belt and only a maximum of one plane per day. Although the Easter Island is part of Chile, they are culturally tied to Polynesia, because of their ancestry. You can tell immediately from the people and the extremely relaxed atmosphere. We have been in many relaxed places in the world, but we have not found a place so laid back, friendly, yet proud and with strong cultural roots. With the horrendous prices in particular for flights (a flight to the Easter Island costs much more than a flight from Europe to South America) there is no mass tourism at this dream place – the manageable number of tourists drives around with quad, motorcycle, jeep or mountain bike across the island instead of large tour buses. Wild horses and cows are everywhere, and you have to be careful not to crash into an animal. The inhabitants are extremely close to nature and in particular the sea: the whole day, and especially in the evening, a large part of the population goes into the sea for swimming. Of course you can eat excellent fish and there are good Chilean wines.

Although in four days we explored almost all the places with upset and uplifted moais, visited every volcano crater and cave, and the landscape is intriguing and truly unique in this world, it is ultimately the people, their way of life, and their culture that have impressed us most. This small island in the middle of the South Pacific appears as a “true paradise on earth”. With much sadness we leave again, because we do not want to leave Shujaa at airport parking for too long.