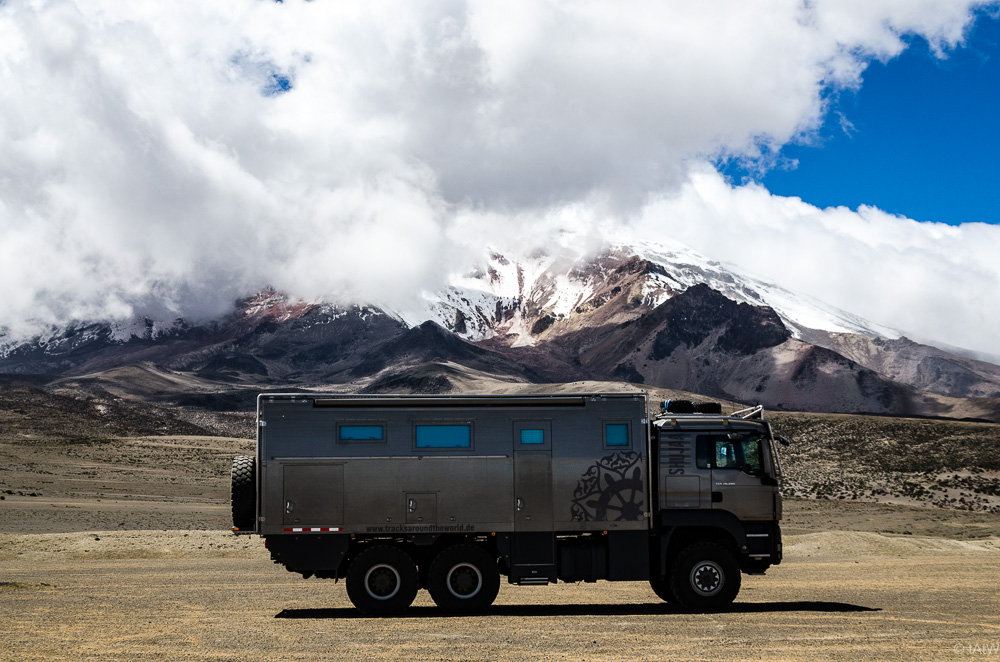 After driving back to Ecuador from Cartagena on the Colombian Caribbean coast in less than three days and having traveled through the small, barely frequented, border crossing in the Amazon lowland without stress, we need some relaxation.

First of all, however, we refresh our stock of super-delicious Ecuador chocolate: we had already visited on the way north over 3 months almost “on the roadside” a small production plant of local chocolate farmers and a few plates, after tasting, taken … It had tasted us so good that Karin really thought about sending us a parcel to Colombia. Since our return route was very convenient: this time we buy in stock locally … there will be a total of 14 plates á 250 grams and an extra discount we get in the quantities, of course, too. That should be enough for the next few weeks and we are already considering whether we should start an import business to Germany with this great chocolate later on. Karin already has the first marketing ideas.

Strengthened we drive up to 4,850 meters high at the foot of the volcano Chimborozo, with just under 6,000 meters, the highest mountain in Ecuador. In contrast to our visit to the Cotopaxi 3 months ago, the weather plays along this time. Several times we see this mighty mountain almost cloud-free, although we always have rain and fog in the sierra despite the dry season. Especially in comparison to Colombia, we see in Ecuador’s highlands many more people in local costumes and many authentic markets, in contrast, the cities offer such. As Riobamba, Alausi, Cuenca or Loja much less colonial charm than in Colombia. It is always fascinating to experience the differences between the respective countries up close and in direct comparison.

After having visited the “Nariz de Diabolo” (the so-called “Devil’s Nose”), a deeply cut river valley, where an old railroad has to maneuver twice in switchbacks to make up for the enormous gradient, we continue to Cuenca. Rainy weather and Sunday afternoon mood make the city seem rather dull for us. The next morning we are at MAN and want to treat Shujaa an oil change – but you have not there the corresponding Euro 5 engine oil in stock, as in Ecuador, still new vehicles are sold with Euro 2 standard. In this respect, Shujaa gets only a few new filters and the diagnostic fitness test attests him the very best of health. The oil change we will then probably make only in Brazil, where our engine is driven, since in Peru, the corresponding oil is not in stock at MAN.

On the way further south to the Peruvian border, we drive on a very narrow track to the Podocampus National Park. Several times we hope that we get through and not back the 8 km back to the main road back – a turning would have been impossible. With the exception of a few upright branches we can do it. The hike “circuito de miradores”, up to 3,500 meters, is no less demanding, with partly dense fog, extreme wind and boggy steep sections. Karin keeps on doing well, even if the broken finger still hurts and is a hindrance especially in the steep sections, which are partly secured by ropes.

After so much driving and action we need some rest: we find them in the Hotel Izhcayluma in Vilcabamba – led by two Bavarian brothers. There is a great restaurant with a beautiful view of the surrounding mountain regions, great hiking trails and – especially important for Karin – especially yoga. Twice a day there is a quite demanding and beautiful yoga offer in a wonderful shala (I learn: the yoga hall). Karin is in heaven. The next 3 days we will relax with quad discovery tours of the area, walks and for Karin of course: Yoga. Time flies by and the climate is really pleasant: not too hot, not too cold, no mosquitoes, excellent spring water. It can be understood that in Vilcabamba, the world’s highest concentration of people over 100 years can be found and settle here more and more American retirees to here to get a great quality of life, with relatively low cost of living.