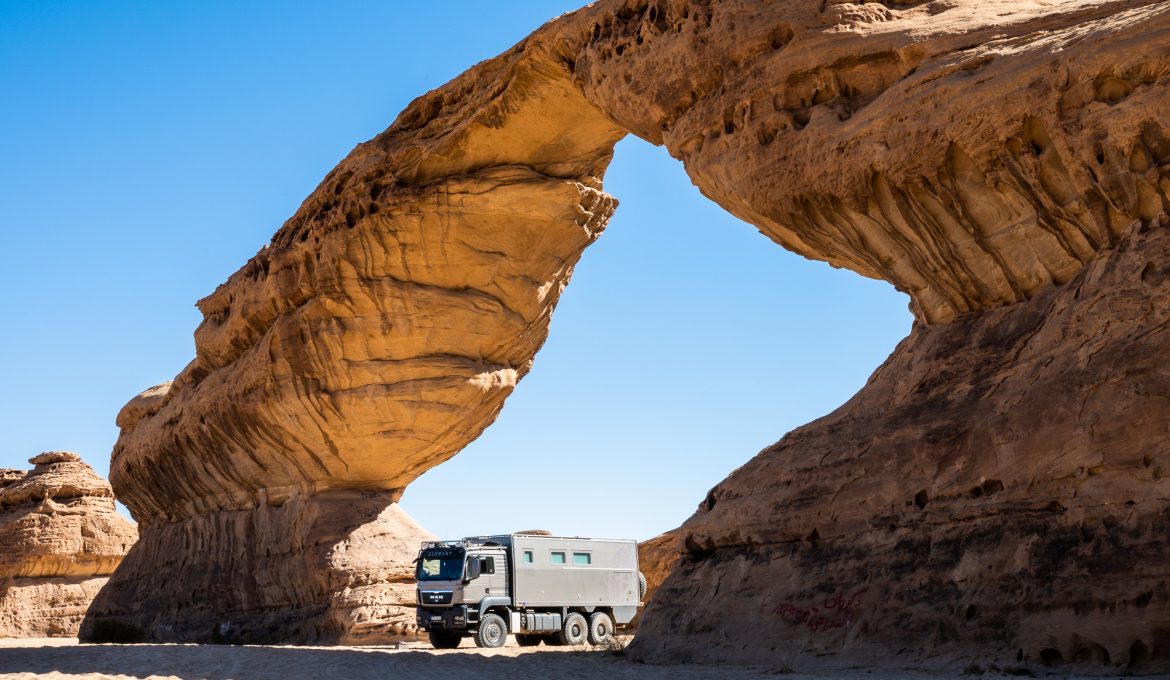 After the exciting experiences of the Dakar Rally in Bisha, we head towards Jeddah… the second largest city in the country. Given the rather disappointing impressions of the capital Riyadh, we are pleasantly surprised: the city seems much more open, more dynamic and, above all, less dirty. The old town with the characteristic wooden balconies (which, despite being opaque, allow good air circulation so that the woman of the house can move around unveiled) is impressive – in some cases extremely dilapidated, then restored with great attention. Huge shopping malls and streets with luxury shops set sharp contrasts to this. You can really feel that here – and not in Riyadh – the country’s development is progressing, and the future is being shaped.

On the onward journey north, we drive along the coast of the Red Sea … partly with industrial plants quite built up, then again very pretty. We find a great place to stay and snorkel with a coral reef close to shore. When we come back to the shore, enthusiastic about the almost completely intact coral world and the colorful fish, the Coast Guard is already waiting for us. Of course, the guys don’t speak any English, like all the police in the country, but it’s clear that they are “not amused”. You are not allowed to swim or stay overnight here…. All too dangerous! Whether the „dangerous“ people from nearby Africa from the other side of the Red Sea pose a threat or the sea urchins on the seabed… we don’t find out. The fact is, we have to leave our beautiful pitch and look for something else – of course not without having taken a long, warm shower in Shujaa beforehand.

Passing the city of Medina – which, like Mecca, is closed to non-believers – we drive further inland to the north. The dreamlike desert landscape of the Nefud Desert with its great rock formations fascinates us… we can’t stop raving about it, taking photos and filming it and cruising with Shujaa across the wide, untouched sandy deserts is so much fun. We change Shujaa’s tire pressure up to four times a day and with diesel costs of 15 eurocents/liter, the significantly higher consumption in the sand doesn’t really bother us.

The whole region around Al Ula is the pilot project of the starting Saudi tourism. The landscape…. just breathtaking. Unfortunately, the Nabataean tombs, the second largest after Petra in Jordan, can only be visited by tourist bus. Painful for dedicated individual travelers like us. In addition, huge other parts of a newly created national park are hermetically sealed off by high fences. First of all, we suspect that the visitor routes should also be regulated here. But then we learn that various wild animals should find an undisturbed home here, e.g. the Arabian leopard, of which there are said to be 200 living here again. And as you know, they can jump up highly!

Despite these regulations, we still find enough great places where we can drive off-road undisturbed and spend a wonderful night. We also discover a great restaurant in an unbelievably beautifully situated luxury lodge, where we have been going for a stylish meal (the first for a long time!) and observe the behavior of the Saudi upper class with interest. In the neighborhood there is a new, very large building completely mirrored (Maraya restaurant), which Karin is particularly fond of. Although the building would completely disintegrate with the surroundings due to its sheer size, the entire landscape is reflected in the surface, so that it is completely integrated into the landscape and is almost invisible from a distance of 2 km. Terrific. A gourmet restaurant is to be housed in this building once finished.

The Wadi Disha – a more than 15 km long, deeply cut rock canyon with deep green reed grass several meters high as well as intensive palm trees – has an unusually large amount of water after the intensive rainfall of the last few weeks. This allows Shujaa to dive a little deeper several times and do an underbody wash. We explore part of the canyon on a hike lasting several hours… we really wouldn’t have expected anything like that in Saudi. The night-time temperatures are now falling to freezing point and for the first time on our trip around the world we use our cabin heating system regularly in the mornings and evenings.

On the way back to the coast, the landscape changes within a few kilometers: wide sandy deserts, deep canyons, black lava fields, green wadis. Unbelievable what this country has to offer.

The country’s largest future project is currently being built along the Gulf of Aqaba: the mega-city of Neom stretches over a coastline of more than 170 km. There is building and digging everywhere. It would be exciting to drive down here again in 10 years to see how everything has changed. We are approaching the border with Jordan and the four weeks in this fascinating country are coming to an end. Of all the countries we have visited on our world tour, Saudi Arabia has been the biggest surprise so far!