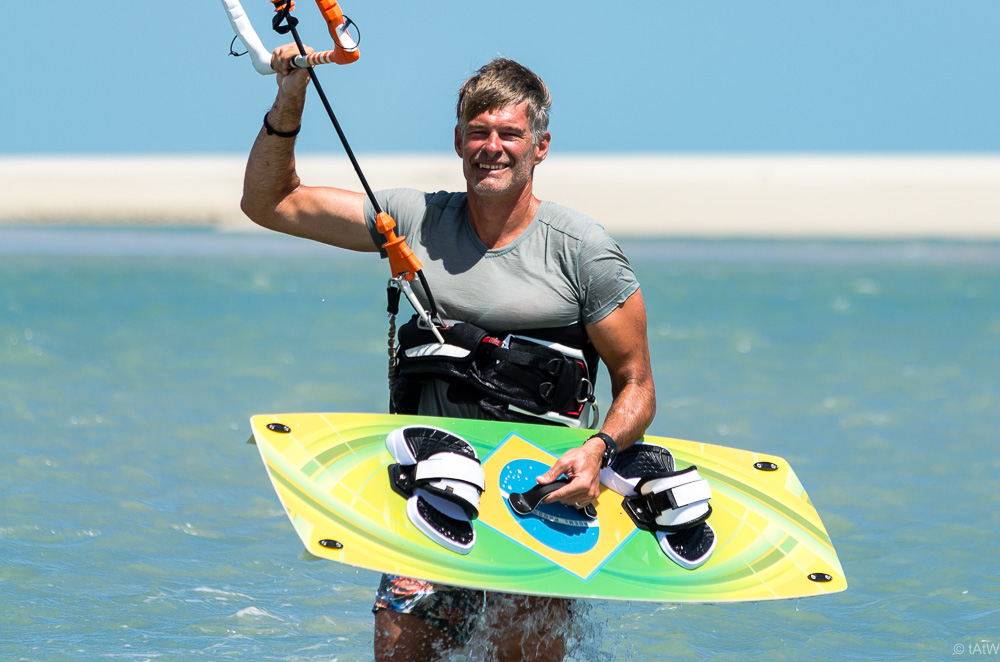 I used to love windsurfing: I drove to the Netherlands almost every weekend during the “Bundeswehr time“ in Cologne and later on from Munich to Lake Garda in Italy. But somehow the kick got lost over the years: much slack and little gliding, big material battles, etc. What could be more evident than to learn this new sport at the undisputedly best kitesurfing area in the world – the northeast coast of Brazil? Especially after Karin told me that she also wanted to join me. What could be better than learning a new sport together at the age of 50?

Other German Overlanders (Sabine and Rallo) have recommended us a German teacher kitesurfing school in little village of Macapa. When we arrive unannounced, no one is there and the station makes a somewhat run-down impression. After we drove through the little village with Shujaa a bit helplessly, word got around immediately that a big German expedition mobile was standing in front of the kite school and on our way back Manuel – the German Station manager – is on site. Although the station is not officially open yet, Manuel has time for a course and also teaches according to German standards. We drive with Shujaa over the beach and park for the next 7 days on the sea side of the kite station (for so long we have never been in one single place so far).

The wind blows up to 35 knots every day, fortunately there is a halfway sheltered deck where we set up our outside home with our camping chairs / table, grill and our second vehicle Shujoo. Since this mini village is explored in just 5 minutes, you can perfectly summarize the next week under the motto “chill & relax”. With Manuel we spend 3-4 hours a day on the water and make progress consistently. On the fifth day we have the first sliding experiences. We practice in a shallow lagoon, which unfortunately becomes even shallower at low tide. In one of the inevitable falls I hit with my left foot the hard sand in the shallow water. A really heavy impact with the heel. At first everything seems ok and I continue to surf for another two hours. In the afternoon, however, I have a foot thick like an elephant, the ligaments in the ankle seem to be badly torn. I can barely walk anymore and the next morning it does not look any better, so we pack up our stuff pretty frustrated and drive on …. We would have liked to practiced one or two days more for ourselves without a teacher at this stage of learning in order to reinforce what we have learned so far. But ultimately rational thinking outweighs passion: continuing does not make sense and another fall would likely lead to tearing the ligaments – the last thing I need on our world trip.

Also Karin has made several considerable skidding laps partly over more than 10 meters in the air and carried lighter injuries. In this respect, our conclusion after 5 days of kitesurfing is somewhat indifferent: we like it and we are also convinced to reach a level of performance in the foreseeable future that makes it really fun. On the other hand, the risk of injury is not insignificant, so we ask ourselves whether we should learn this sport during our trip around the world, where of course the limitations of injuries are much higher than e.g. from another location such as from Mallorca.

Jericoacoara – our next destination – is one of the most internationally renowned windsurfing and kite spots. It used to be a hippy drop-out location on one of Brazil’s most beautiful beaches, where the cows and goats wandered along the still-existing sand roads and joints were available on every corner. Today in addition to all the wind and kite surfers, the international jet set also comes along and enjoys the super-chilled atmosphere in the very stylish 5-star hotels. Accordingly, the place is also discussed quite controversial in the Overlander scene, for many it is a big disappointment. We love diversity and that’s why we like Jeri: traveling with Shujoo – our quad – through the national park over the dunes is a spectacle. Hard to believe that such a place with perfectly functioning infrastructure can only be reached by quad, buggy or SUV over the dunes or along a beach. The place itself is car-free – only the inhabitants are allowed to drive with vehicles through the deep sand roads of the village. We enjoy the day: Karin buys a great bikini “Brasilian Style” including a matching crochet vest. We hang out in the beach club and sip once again the great Caipis and close the evening with a great dinner. With a good alcohol level, we then search Shujoo in the dark, which we parked half a day ago outside the village sealed off for external traffic. The 20 km drive back to Shujaa over the dunes is spectacular (everything is pitch dark, only the stars shine over us) and challenging at the same time: luckily, we let our sat nav run on the outward journey, so that we can drive back exactly the same track. An orientation in the absolute darkness in the dunes would be impossible. What a day and yes – we love Jeri!

The next morning, we spend a few hours at the great lagoon at our camping in Jicoa de Jericoacoara (the new bikini by Karin must of course be shown in a timely manner), then finally say goodbye to Sabine and Rallo with their twins, with whom we travelled the last two weeks more or less in parallel and aim for the next kite spot.

Paracuro just before Fortaleza is kiting again without shi-shi. We park directly behind the restaurant and the surf spot and make a nice beach walk. The passion to continue kiting is still there. Karin’s slight weakness is quickly regained with 2 Caipis. Our life and travel here in the north-east of Brazil has somehow completely changed compared to the first 11 months ….