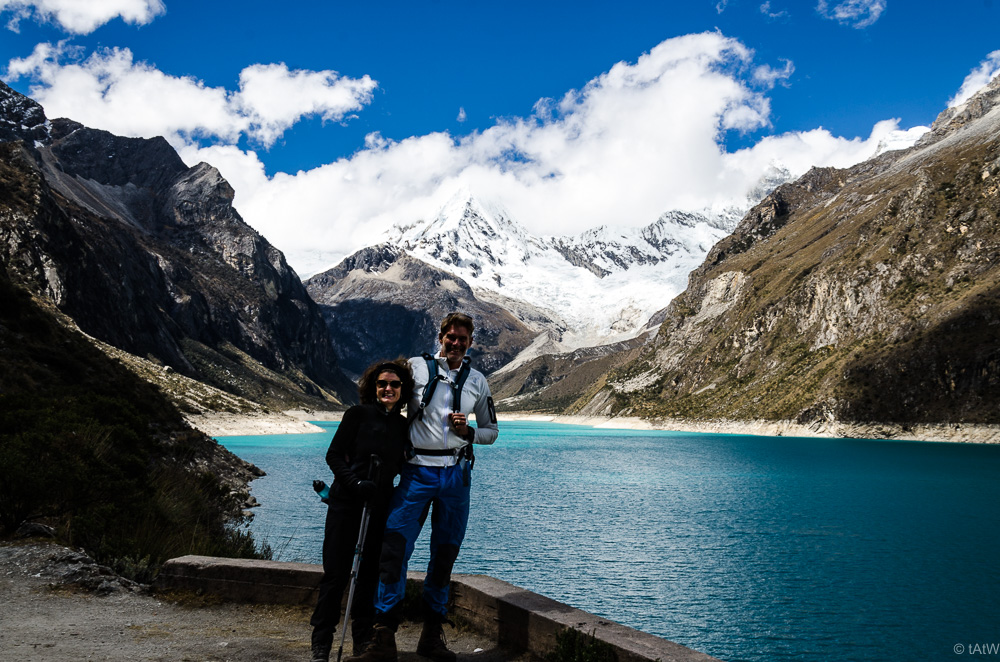 Through the Canyon de Pato (the so-called Duck Canyon with over 30 carved into the rock tunnels, but for us – especially after the “driver training” in recent weeks – easy driving) we drove from the north to the plateau of the Cordillera Blanca. With the Huascaran at 6,768 meters elevation, the Cordillera Blanca not only has the highest mountain in Peru, but with over 30 mountains higher than 6,000 meters, it has the highest concentration of really high mountains in total America. Everywhere clearly visible and thought-provoking is how strongly the glaciers withdrew from this region. Nevertheless, the Cordillera is still “blanca”.

Starting from a nice farm-style camping near Caraz we drive with Shujoo – our quad – to the starting point of day hikes at the Laguna Peron and the Laguna 69. We drive on small mountain slopes up to about 4,000 meters to the starting point of each hike and take the challenge from there to hike in the thin mountain air. But we are rewarded with fantastic mountain panoramas and the weather also plays along – which is rather unusual for the Cordillera Blanca. Only once, after the actual hike, on the descent with Shujoo from the Laguna 69 we got into a heavy storm: First rain and then extreme storm with sand drifts let the view sink to zero. But afterwards we enjoy our subsequent hot shower in Shujaa all the more. And, of course, Karin also starts the washing machine right away.

After 3 days having our base camp in Caraz we travel to the eastern side of the Cordillera – this time with Shujaa and the entire household. We enjoy again wonderful mountain panoramas, visit small mountain villages like Chacas (where we still see traditional handicraft production of wood carvings and mosaic paintings) and again visit some culture sites: The Ruin complex Chavin de Hunantar is the oldest stone complex of Peru dated from 1.000 B.C. The entire complex comprises numerous buildings with platforms and courtyards. Chavin means “center” and refers both to the middle between the jungle and the coast, as well as to the middle of the north-south orientation of the former Chavin sphere of influence. Although we are not known as friends of “old stones”, we are very impressed by this plant: the location, the size and the spiritual “vibe” make a very special combination. The drive from Chacas to that place, however, was again “Peru mountain roads at its best”.

All the more we enjoy the well-developed roads from the Cordillera Blanca on to the south, where we can roll relaxed and swiftly to Lima. There we want to have our second inverter installed (as a replacement for the one that was broken when we returned from Germany) and have pre-ordered for Shujaa the “right” engine oil at MAN. In addition, we want to visit the city, of course.