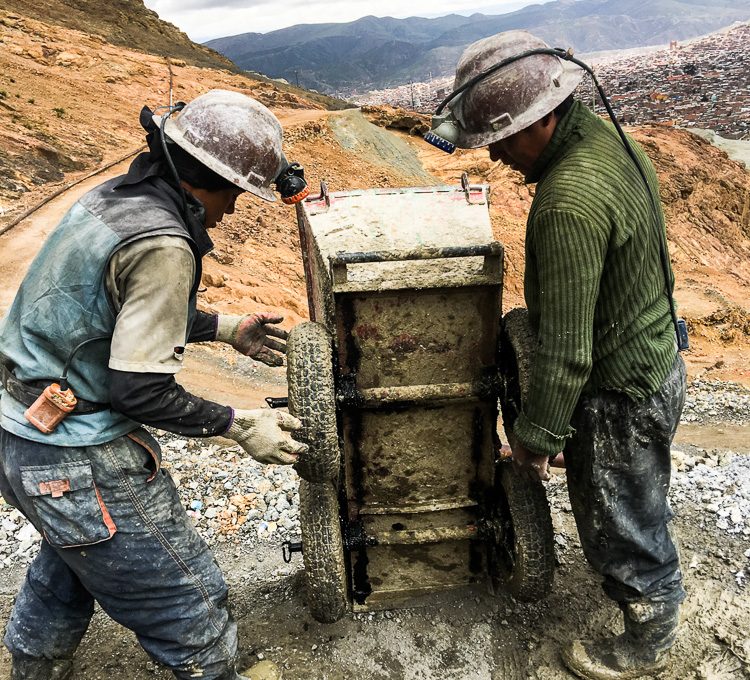 After both the lagoon route and the Salar de Uyuni were undoubtedly absolute highlights of our so far 4-month journey through South America, we were very curious about the rest of Bolivia. The country’s reputation is not the best among Overlanders: corrupt police, permanent roadblocks through strikes and protests, very problematic fuel supplies for foreigners, etc.

First, we drive to Potosi – a mining town located at over 4,000 meters – with its famous mountain “Cerro Rico”. This mountain has been exploited for over 400 years because of its mineral wealth (formerly primarily silver, now primarily tin). There are a total of about 400 inactive and 180 active tunnels and it is only a question of time when the entire mountain will fall apart. An excursion through the tunnel maze led by a former miner, a visit to the statue of mining god “El Tio” and a tour of the downstream processing processes brings us closer to the extremely adverse working environment of the mining workers in an authentic way. Certainly not a pleasure-seeking job, even if the earning potential is still very good.

Deeply impressed, we drive on to Sucre – the most beautiful city in Bolivia with a large market, many colonial buildings and a pleasant elevation of only 3,000 meters which allows us to explore the city without permanently being at the limit of our physical capacity.

Most Overlanders drive from here directly towards La Paz, but we still want to explore the Bolivian mountain rainforest and the lowland jungle and therefore drive over some really challenging mud steets into the Amboro National Park. First, on the south side on a pleasant elevation of 2,000-2,500 meters, we make a great, guided hike through the mountain rainforest with meter-high ferns and bubbling waterfalls – you feel like you’re in paradise. In addition, the local city of Samaipata has lots of flair and we like it very well. We see the local carnival and there are really stylish cafes that would well suit with their ambience to Mallorca. Only the fact that in the middle of the night a seemingly drunk driver rams our Shujaa parked next to a soccer field clouds the atmosphere a bit. Although it rumbles violently we have – hard to believe – only a few scratches on the lower storage box. Shujaa is indeed a true hero and very robust.

Then it goes via Santa Cruz to the north side of the Amboro National Park, which already belongs to the lowland basin of the Amazon. Also there we do a guided excursion. Due to the rainy season and the associated high water levels of the rivers, we have to change after 1.5 hours of off-road driving to horses, which bring us in another 1.5 hours to the jungle camp, from where we undertake several hours of hiking trips. Moisture, typical jungle sounds, rare birds, beautiful butterflies, industrious ants with huge leaves on their backs. Everything you imagine about the jungle. Also a constant itching, if only in the head, because of all the small animals. Whilst we were still at altitudes of over 4,000 meters a few days earlier, we now have to contend with almost 100% humidity and tropical temperatures, but even this long day trip is worth the effort.

Continuing along the so-called “lowland route” (which crosses many draining rivers that go into the Amazon) to the north, within only 80 km we climb back to 3,000 meters through the “Yungas” on terrible and wet slopes via Cochabamba to La Paz. Whilst searching for an evening parking space in the flooded landscape, we pull a stuck taxi out of the morass. Unfortunately, this action in combination with the nocturnal rain causes us to dig deep again in the morning and, despite the use of shovels and sand trays, only get afloat again with the help of an excavator and a tractor. Annoying, but after all, unlike the Llancanelo Lagoon in northern Argentina 7 weeks ago, this action lasted only 3 hours and not 3 days.

Exhausted, we arrive in La Paz and move into the secured camping in the courtyard of the Hotel Oberland – a Swiss run hotel and popular meeting place of Overlanders. In the evening we eat – quite “typical” for La Paz – a Swiss cheese fondue. Despite intense subsequent enjoyment of our “bloodroot” Schnaps Karin the next morning feels very bad and – after two days of no improvement and the fever not going down – she finally reluctantly goes to the doctor. Salmonella and we puzzle where she caught it, we have both almost always eaten the same thing and I am just doing fine.

The city tour of La Paz is therefore very stressful for Karin, but no less fascinating. La Paz now has the world’s largest urban cable car gondola system (built by the Austrian manufacturer Doppelmayr) which not only serves to overcome the over 1,000 meter difference in altitude between the lowest and highest point of the city, but also to relieve the chronically congested roads. El Presidente (Evo Morales) is very proud that his country, which is more of a third world country, is the “world market leader” in this regard. We are glad that sightseeing can be accomplished in a relatively relaxed way. Unfortunately Karin is not doing better on the third day either, so unfortunately I have to tackle the ultimate challenge alone – with the mountain bike the “road of death” 4,000 vertical meters downhill.

On the last day in La Paz, when the antibiotics finally work, we go to a first class restaurant (Gustu), again one of Karin’s “Christmas List 2016”. And one from the ranking “50 Best of South America”. Incredibly creative cuisine and the best we have had on the trip so far.