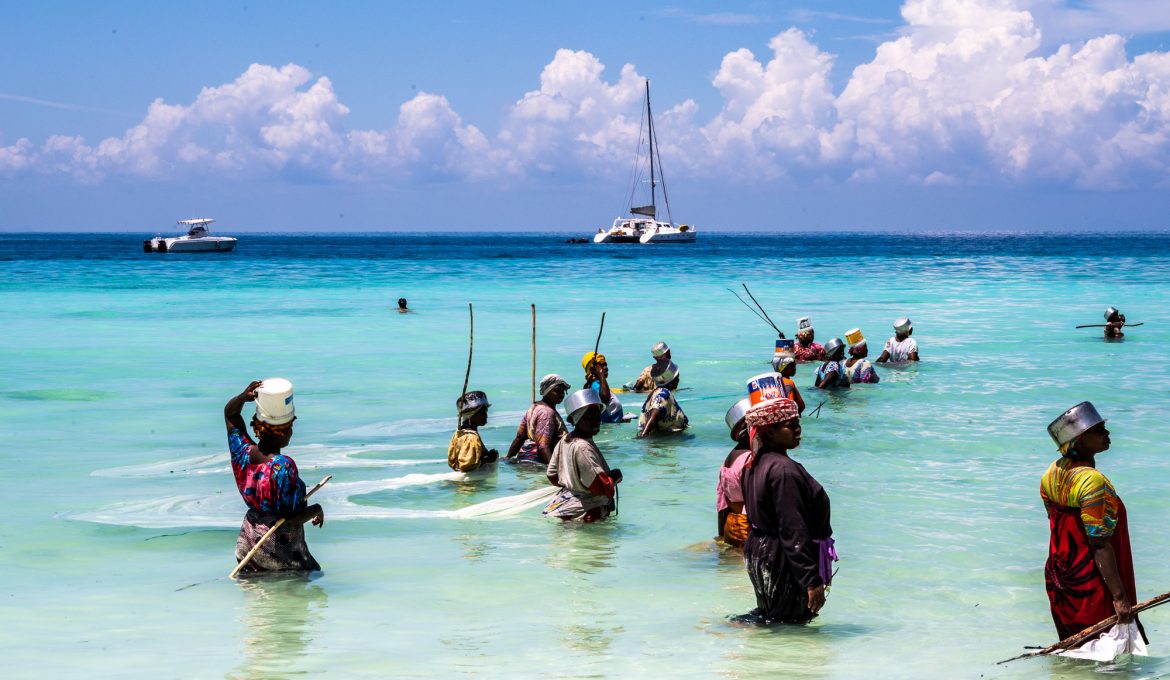 Zanzibar is without a doubt the cultural highlight of East Africa: The clash of different cultures (Arabs, Indians, Africans), spice plantations, dreamy beaches etc. And of course, Stone Town, one of the best-preserved cities from (pre-) colonial times and Africa’s most important trading city in the 19th century for slaves and ivory. With correspondingly high expectations, we board the fast ferry from Dar el Salaam Downtown and arrive in Stone Town in just 1.5 hours. Shortly before, it starts raining heavily … that’s not how we imagined our arrival in Zanzibar and we are worried about the weather for the next few days. Due to the still strong autonomy status of the province of Zanzibar (only after the independence of the former mainland state Tanganika it was merged with the independent state of Zanzibar to “Tanzania”) we have to go through immigration and even get a stamp in the passport. But this time nobody asks about a corona test.

You can tell at first glance: Zanzibar is different. Almost 100% of the population are Muslims (with a corresponding impact on clothing and places of worship, for example). The Arab influence, which dominated Zanzibar until the revolution in 1964, is still present everywhere: especially in the architectural style of the buildings (even if a lot has fallen apart due to the extremely humid climate). The island is very green: there are still remains of primeval forests, dense banana plantations and even rice plantations. The population is very relaxed and friendly.

The first two nights we stay in Stone Town, where with the Kholle House we found a beautiful boutique hotel housed in an old Arab ruling house and now under French management. We explore the city, stroll through markets, Karin buys the usual bracelets etc. and we enjoy chilled dinners on the beach or from the roof terrace. Despite Corona, for the first time on our  this year’s trip we meet noteworthy gatherings of tourists: Mostly Russian package holidaymakers (they are currently hardly allowed to travel to any other country due to the applicable Corona regulations) who cannot speak English and hardly leave any money in the shops. Accordingly, they are not very popular with the locals.

Then we take a small boat over to Chumbe Island, 13 km south of Stone Town. Surrounded by the first private marine reserve in the world – initiated by a German – there is a fabulous underwater world that is considered to offer one of the best shallow water snorkeling in the world. In fact, we have never seen such magnificent and, above all, intact coral reefs. The island itself is dominated by thousands of giant coconut crabs and hermit crabs that live in temporarily “borrowed” snail shells. A bit like on the Galapagos Islands – you have to be constantly careful where you step. The award-winning lodge itself consists of only seven bungalows and is built in an eco-style: only rainwater, solar power etc. … and makes the dream of a Robinsonade come true. From the over 100 year old lighthouse you have a great view of Zanzibar and the small Chumbe Island.

The next day we first take a taxi to the Josani jungle: first of all the amount of tourists shock us. Many minibuses spit out tourists, we have to queue at the ticket counter, no possibility to practice social distancing and we no longer have our guide to ourselves. We probably wouldn’t have noticed this in non-Corona times, but so…. You can tell that Tanzania is one of the few travel countries that have no entry restrictions for anyone and is therefore THE destination for everyone who “wants to get away from home”. The jungle and the adjacent mangrove swamp, however, are indeed very beautiful.

Today is Karin’s birthday and she has spent a lot of time researching beautiful hotels on the Internet for a few days off. She deliberately chose a very little touristic section in the north-east of the island north of Matemwe with an offshore reef. The tension rises when the first hotel is completely neglected due to a lack of guests (especially against the background of the very steep price) and the second hotel turns out to be closed. Not a nice place to stay on Karin’s birthday … tension is slowly building up. But luck is on our side again: the third and last hotel on the shortlist – the Kacha Boutique Hotel – is a hit: we are the only guests here too, but the owner family from Stone Town spends a weekend there and so everything is well maintained and we have nice conversations. Our villa with its own pool in the first sea line is huge and nicely furnished, the whole complex is a dream and everything for a third of the normal price.

We make trips to the much more touristy, but still “relaxed” Nungwi in the north of the island, as well as a boat trip to the Mnemba Atoll. Here we have great snorkeling experiences again around the private island owned by Bill Gates. The water with its colors, the corals and above all the fish world are simply incredible.

After a week we leave Zanzibar with a little sadness, but we are also happy to find Shujaa again safe and sound on the camping site of the Sunrise Lodge south of Dar es Salaam.