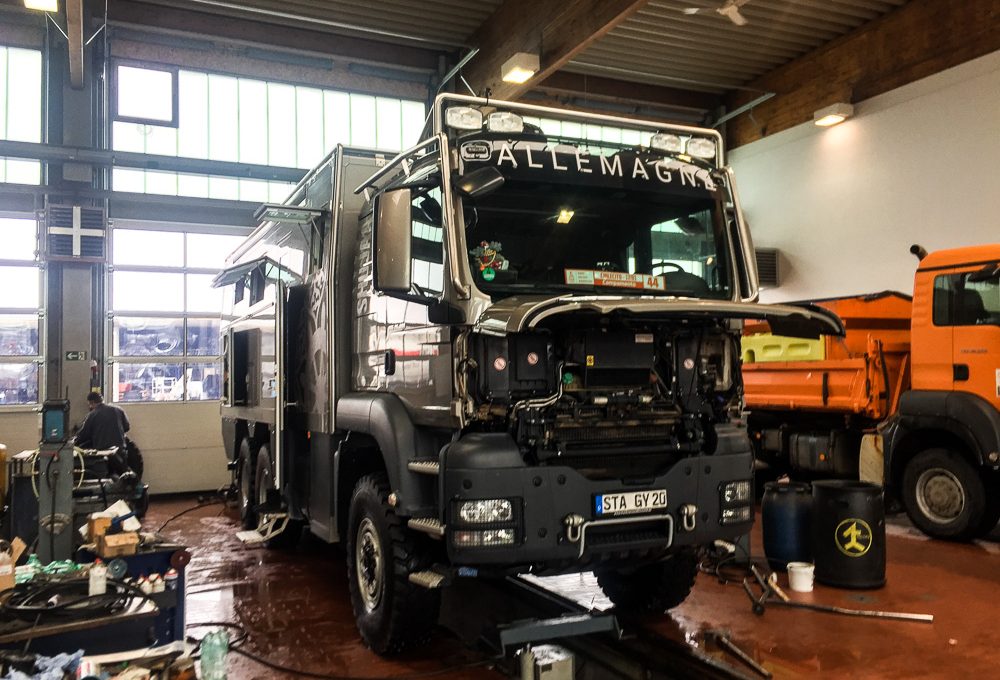 Shujaa is finally shipped and on its way from Antwerp to Walvis Bay / Namibia, our flights are booked for this week and we are getting excited. The break of 4 months in our home in Mallorca was very nice. Of course, we did not get bored, but the travel fever rises again and we cannot wait to hit the road again.

We have seen many friends over the last few weeks, also super nice new Overlanders, Shujaa has received its wellness treatment and has been further optimized in small details. The itinerary for the next 9 months through Namibia, Botswana, Zimbabwe, South Africa, Swaziland and Lesotho is planned and the carnets for Shujaa and Shujoo have been organized.

The carnets – despite the best planning (what else 😉) – have however caused quite a bit of stress: This customs document is actually intended for the duty-free import of vehicles to third countries, where there are usually high import duties for vehicles and the carnet must therefore been founded with high deposit so that no one comes up with the idea to sell the vehicle during the trip (duty-free) in such a country and avoiding the import duties. The carnet therefore has nothing to do with the shipment itself and the export from the EU. Although we were already in possession of the carnets at the time of shipment to Antwerp and ADAC, as issuing institution, advised against “stamping out” when exporting from the EU, we received the call from our ship agent one day after the delivery of Shujaa in Antwerp: “Without stamped Carnet the shipping company Shujaa does not want to ship”. We were just boarding the plane from Cologne to Mallorca, the weekend was approaching, and shipping should take place on the following Tuesday. So instead of flying with the carnets back to Mallorca which would have postponed the delivery process I decided to run out of the boarding gate again, through the security to the next taxi stand…handed them over to the next taxi driver and gave instructions to have them delivered to my mother. With two mobile phones in parallel I gave instructions to the shipping agent and my mother to initiate an express courier shipment to Antwerp. Then I was running back through the security and quickly into the plane…which surprisingly was still waiting because of problems with air traffic control. Stress like in our old business world, but finally it worked out and Shujaa was still loaded on time onto the ship. Thanks to my Mom!

How quickly big travel plans can change, we have also seen in another incident. Just in Antwerp, I was just clearing the delivery formalities, Karin sends me a message that the RoRo ship “Grande America” ​​of Grimaldi caught fire in the Biscay and then sunk, losing the entire cargo. With this very ship we had Shujaa transported to South America 1.5 years ago ….wrong time at wrong place – dreams and projects can die so fast. We feel with the losses of the Overlanders who had their vehicle on board.

But now we are confident that neither the carnet issue, nor a shipwreck, nor a near-mass truck crash (which we also experienced on the way to Antwerp) can hinder us from the second part of our trip around the world. As always, saying goodbye to Shujaa was emotional, and we hope that our third and for the time being last major shipment will be as easy as the previous ones, i.e. without burglary or shipping damage.