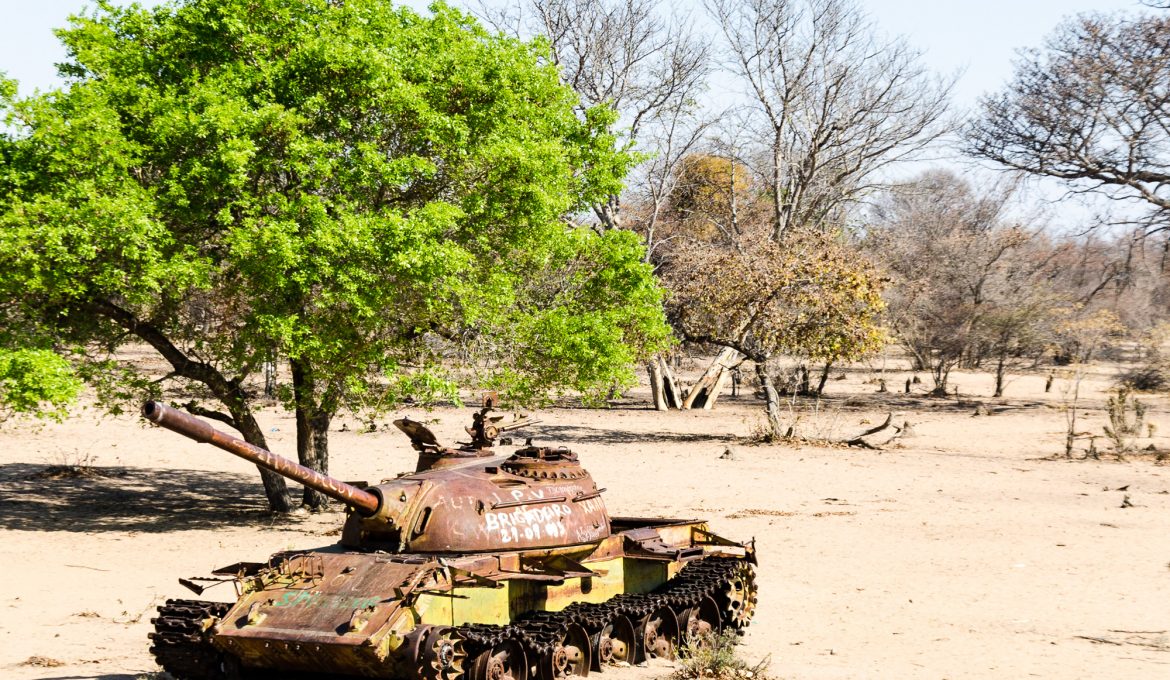 W/R to Angola, we are really curious: after decades of civil war, the battered but resource-rich country was slowly reviving before the significant decline in oil prices in 2015/2016 put the economy back into bad shape. Tourism is still completely unknown: Until a good year ago you could obtain a tourist visa only with great efforts (letter of invitation, etc.) in the home country. But since President Lorenco came to power in 2018, a lot of things have turned positive: the visas can now be applied via online and with the development of tourism one wants to reduce the dependence on oil and gas in the long term and the corruption is slowly declining (albeit) Angola is still one of the most corrupt countries in the world. Let’s see how long the establishment takes it all in …

In any case, we manage to get over the Santa Clara border in 2,5 hours (of which one hour is spent on the surprisingly unorganized departure from Namibia). Everything works correctly and the e-visa process works amazingly well. The ATM spits out Angolan Kwanza and we buy a SIM card from Unitel right on the border with English-speaking sellers. Everything is easy…. so far.

The first 400 km north-west to the provincial capital of Lubango are passing quickly: the infamous Angolan roads are at least on this route in a top condition. Only the numerous bombed tanks and other rusty military equipment on the roadside testify that until 2002 a terrible civil war had taken place, supported by the parties of the Cold War (even Cuba had temporarily sent over 50,000 soldiers). Lubango itself, like most Angolan cities, is not terribly exciting. But it has a big Christ statue (not as impressive as in Rio, however) and above all a more than 1,000 meters deep escarpment: Tundavalia. Here we enjoy dream views from our exposed pitch.

The impressive Serra de Leba Pass descends into the Angolan Namib Desert with its extraordinary sandstone formations amidst green oases ….. Angola is sparsely populated here. In lonely fishing villages along the steep coastline, time seems to have stood still: except for the truck to transport the fish, when the refrigerated container is full, nobody comes here. People are much harder for us to “read” than in any other country we have visited so far: they are very withdrawn and almost always ignore us completely, yet they are proud (hardly begging). You have to actively address them (which, given our virtually non-existent Portuguese skills, is difficult) to get any reaction at all. But you can camp anywhere without any problems and safety is no issue at all.

Along the coast, we drive north, have a stylish dinner in Lobito and visit the Binga Falls. The Kissama N. P. south of Luanda (completely unknown and the only N. P. Angola’s with at least some infrastructure) surprises us very positively: the green landscape with countless baobabs and large acacia cactus gives the park a very special mysticism, which many well-known parks have lost nowadays. The wildlife that was completely wiped out during the civil war is back again: In the so-called Operation “Noah’s Ark” elephants, giraffes, wildebeests, zebras, etc. were flown in from Namiba, Botswana and South Africa by means of huge Russian transport planes and successfully settled in the park. The animals seem to be doing well in this great environment and accordingly proliferate. Speaking of baobab: most of the country is pervaded by dense baobab forests. For us, Angola is the baobab country.

From Luanda we heard many negatives in advance: Moloch with extreme garbage and traffic, most expensive city in the world, extreme contrasts of rich and poor. We spend a day and a night there. Part of the prejudices are true (extreme garbage as we have seen it nowhere during our travel so far), part of them are not true (price level is after the oil crisis on German metropolitan level, but far from international / cosmopolitan level, traffic is less serious than in Munich). Anyway, Luanda is pretty ugly and barely has any highlights ….

In Angola, too, we are traveling much faster than planned. So, we decide to drive all the way to the north, to the delta of the border river Congo, the second largest river in Africa. The delta is at the city of Soyo up to 20 km wide …. surrounded by dense jungle, mangroves and a huge US$ 10 billion LPG plant. For us, the Congo as well as the whole country Angola exerts a tremendous fascination: here there is the real, wild Black Africa in its most authentic form. During our 2.5 weeks in the country we do not see a single foreign tourist!

From only 6 degrees south of the equator on the Congo, we orientate ourselves again to the south, but this time it goes through the interior of the country. We visit the Calangula waterfalls, which – depending on the source – are the second or third largest falls of Africa, embedded in tropical nature. The Piedras Negras, large and sometimes lush granite cliffs, have a lot of mysticism. Then we drive into the highlands of Angola (where, inter alia, the water of the Okavango Delta comes from). The former farm-belt of Angola was severely damaged in the Civil War and we see the war relics particularly clearly here: not only rotten tanks, but also many bombed houses from the colonial era. These could be made habitable again with relatively little effort, but the Angolans seem to favor the meager existence in their mud huts.

In the countryside, Angola is sparsely populated, but the Luanda metropolitan area is even more densely populated. In addition to the rural exodus that prevails throughout Africa in general, this is due to the relative security that Luanda provided during the civil war, and hence led to a mass escape from the rest of the country.

We keep on shaking our heads about the different road conditions in Angola: suddenly there is a 50 km long dirt road in miserable condition in the center of the country, where the main tarred north-south connection is very well developed. Fortunately, we have no traffic and it does not rain, otherwise a “Transamazonica chaos” would be inevitable. Huge new bridge foundations stand in the middle of the landscape, but there is nothing to see from a street leading to the bridge. In the sparsely populated border area to the Congo, there is a completely oversized highway. Then again suddenly concrete speed bumps, without notice and marking, just because 1 km further down there is a narrow bridge over a small river. You have to drive with constant concentration. In addition, every few miles, despite the extremely low volume of traffic, lorries or buses are lying in the ditch: pulling out and repairing is not an option, they are exposed to decay. In particular, the container bridges seem to like to fall from the truck and thus from the road. Together with the large distances between the sights, this makes it quite exhausting to travel the country. Appealing infrastructure is also completely missing.

Nevertheless, we are glad to have visited Angola. It is by far the poorest of all countries we have visited so far and offers a completely different perspective and experience. Fortunately, we had no problems with illness or with Shujaa – then this country can be extremely stressful.