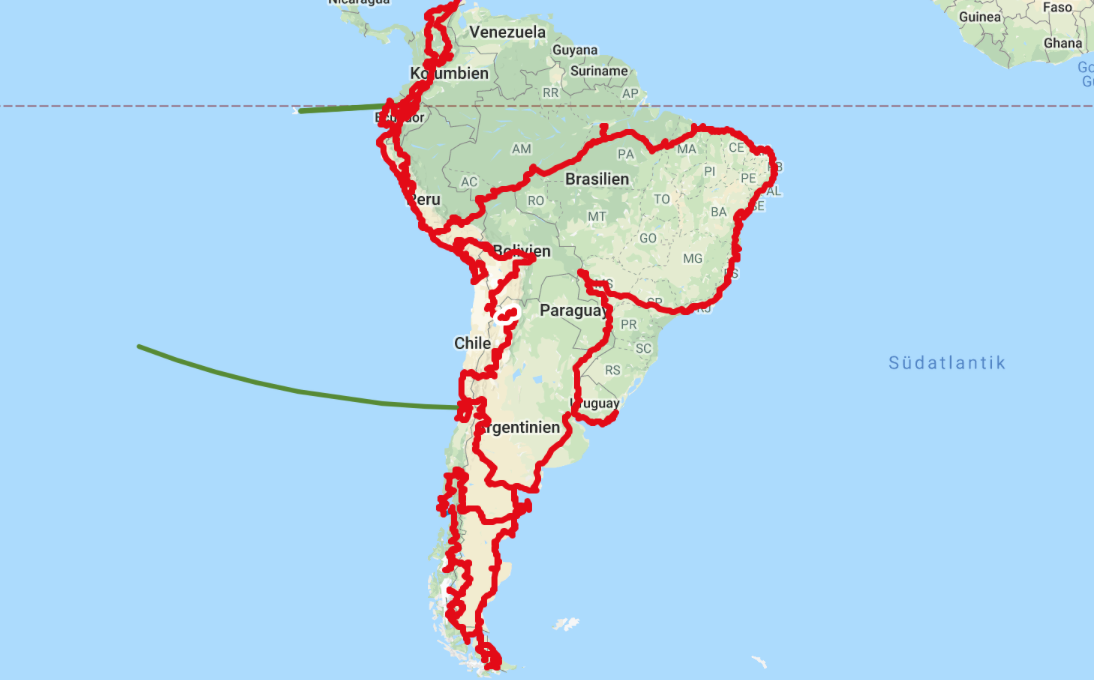 14,034 km in 66 days. We spent hours watching the whales on the Peninsula Valdez, survived the endless roads through the Patagonian Pampa with extreme winds, had excellent steaks and saw many penguins and elephant seals. At mount Fitz Roy we spent wonderful days hiking, the Perito Moreno glacier calved for us monstrously and in Ushuaia in Tierra del Fuego we visited the end of the world. In the lagoon Llancanielo near Mendoza we spent three days digging out Shujaa and produced a lot of adrenaline. We fell in love with the concept and the wines of Bodega Alpassion and experienced an unforgettable Dakar Rallye right in the camp. And at the very end of our journey, we experienced the north-east region of the country as a completely different area, almost like the Pantanal in Brasil.

8,157 km in 56 days. A breathtaking country with incredibly diverse natural beauties. We hiked through the spectacular and incredibly humid cold rain forests in South-Chile and drove along the fascinating Carretera Austral with deep-hanging glaciers down to sea level. The Isla de Chiloé surprised us with its velvety meadows, wooden churches and beautiful landscapes so that we initially did not notice the loss of our roof rails. We photographed countless waterfalls and experienced a gorgeous colorful Torres del Paine. The wines gave us a great pleasure, especially the winery Viu Manent. The Easter Island was an unusual and enchanting mystical variety. In San Felipe and in Vicuñia we met wonderful people who quickly became real friends to us. Finally, we were inspired by the inhospitable Atacama Desert with its extraordinary rock formations and salt lagoons.

2,658 km in 24 days. Bolivia is rough and beautiful at the same time. People are often very poor, for us Bolivia is the only developing country in South America. Oliver drove over a cement bollard right on the border. The lagoon route was, despite moderate weather, spectacular, but also rough to drive. Uyuni was under water, so we experienced the Salar only with rubber boots and by foot, but also that was unique and just great. In Potosi we visited an underground silver mine in the Cerro Rico mountain in befitting clothes and in Sucre we experienced the Carnival and a sympathetic city. In Samaipata we did a mountain rain forest tour and in Buena Vista we explored on horseback for the first time the jungle. La Paz was for Karin, who had caught salmonella, rather a hospital stop and for Oliver with the Death Road a mountain bike adventure stop. The first part of the Lake Titicaca was a round finale of this beautiful country.

8,568 km in 55 days. The second part of Lake Titicaca we visited by boat. Arequipa immediately appealed to us as one of the most likeable cultural and shopping cities. The coastal desert stood in contrast to the lush mountains and offered us in Nasca a great view of huge rock formations. On the Peninsula Paracas we admired the barren, but infinitely beautiful and contrasting dune and desert landscape. All in all, we looked at many “stones” in Peru, that is, many cultural sites that were really extremely interesting. At the Swiss Wassi we spent some days on a caribbean-like beach and enjoyed some time “off” from travelling. Just beautiful. Extremely challenging were the spectacular and for us difficult mountain trails of Northern Peru. The Cordillera Blanca enchanted us with its spectacular glacial views and wonderful turquoise lagoons we hiked around. Also Lima as a big city showed the best side to us. Overall, we were completely impressed by Cusco and its environment. The Valle Sagrado, the Machu Picchu and the Rainbow Mountain are certainly among the highlights. On top of all of this, we met dear friends in Cusco and were deeply impressed by the shaman Alonso.

4,298 km in 47 days. This beautiful country has convinced us with its South American diversity in a relatively small area. It just has everything the traveler’s heart desires. We learned that Ecuador is the world’s banana and chocolate country. In Salango we stood for a few days on a dream place above the sea on the cliffs, exploring the rainforest and enjoying the beautiful tropical beaches. We hiked around the Laguna Quilitoa – including a lightning strike in the hiking stick. The volcanoes Cotopaxi, Tungurahua, Reventador and Chimborozo could sometimes be seen more from their foggy side, but are beautiful to look at and to hike – and sometimes even snored at us. In Coca, Oliver had to endure a terrible dog attack by three aggressive animals, whose wounds we had to treat for weeks. Our jungle trip to the Sacha Lodge was extremely diverse and gave us many insights and views of the beautiful wildlife. In the small town of Mindo we enjoyed a great waterfall tour and saw beautiful butterflies. Also, we liked Quito as the capital and of course we experienced a breathtaking sailing tour through the Galapagos islands, amongst others snorkeling together with sharks. In Otavalo and the highlands, we could admire the typical beautiful costumes. In Vilcabamba we took a little break and Karin enjoyed doing yoga twice a day for days.

6,357 km in 48 days. The beautiful Colombia we experienced as very sympathetic, open and squeaky clean. The traffic is a little faster and more ruthless than in the other countries and the roads through the villages were partly quite small for us and Shujaa. The Las Lajas Monastery is beautifully situated on a rock. The Laguna de la Cocha with its wooden houses is very picturesque. In San Augustin and Tierradentro we admired historic sites and the Desierto de la Tatacoa we explored by quad in order to be closer to the beautiful nature. Salento and Villa de Leyva are absolutely worth visiting and are beautiful colonial towns with a lot of charm. We admired the high wax palms in the Valle de Cocora and also in Colombia we did not miss cities like Bogota or Medellin. In Zipaquira we visited the mystic underground salt cathedral and experienced the absolute record of the temperatures in the humid region of Mompos. The peninsula La Guajira is rough and very windy. With its deserts and extremely poor people it is the northernmost point of South America. We hiked to Ciudad Perdida for four days and Karin unfortunately had her forefinger injured in a fall. The more we enjoyed the absolutely prettiest town of South-America – Cartagena.

13,391 km in 70 days. Brazil has what it takes to become our favorite country. At first, we had concerns about the many warnings about crime, but we really never had any problems. The people are refreshingly uncomplicated. First, we drove the Transamazonica, with lots of red dust and adventurous bridge repairs and muddy roads with lots of stuck cars. In Santarem we found lovely friends. Lencois Maranhenses, a coastal desert with lagoons, has simply overwhelmed us, even from the air. The coast in Brazil is unbeatable in the north for kiting and in the south (Bahia) for the dream beaches. We enjoyed Rio with its diversity and Sao Paulo with its ugliness as well as small sweet towns at the sea like Trancoso and Parati. The Pantanal with a wealth of animals and Bonito with its crystal-clear rivers were equally fantastic. An absolute highlight for us were the Iguaçu Falls at the end.

1,795 km in 17 days. First, we wanted to skip this little country because we did not read much about it, but that would have been a mistake. Uruguay is a special country compared to the other South American countries. Extremely organized, the people are quiet and very sympathetic. The country rightly has the reputation of being South American Switzerland. On the street are many beautiful vintage cars to see. Colonia del Sacramento is a pretty colonial town with lots of charm and great lanes. Punta de l’Este could also be in California – great restaurants, nice shops and fabulous mansions line the coastal road, which was still deserted as we were out of season. The coast is therefore very lonely and offered us many opportunities for long beach walks. The Cap de Polonio surprised us with a small exit village, much peace, an incredibly cozy restaurant and a seal hound. Again, in Punta de Diabolo, we met nice people, but also tourists from Brazil, who spontaneously invited us to a barbecue, which we really enjoyed. Once we also tried to rescue a baby seal from a plastic bag. In the end we met our friends Gabi and Peter with their Globi and spent some nice days together. Also Montevideo, as a last stop, was worth seeing.